Blog - Latest News
You are here: Home / Banks / Covered Bonds in India: creating a desi version of a European dish

It is not uncommon to have Indianised version of global dishes when introduced in India, and we are very good in creating fusion food. We have a paneer pizza, and we have a Chinese bhel. As covered bonds, the European financial instrument with over 250 years of history were introduced in India, its look and taste may be quite different from how it is in European market, but that is how we introduce things in India.

It is also interesting to note that regulatory attempts to introduce covered bonds in India did not quite succeed – the National Housing Bank constituted Working Group on Securitisation and Covered Bonds in the Indian Housing Finance Sector, suggested some structures that could work in the Indian market[1]  and thereafter, the SEBI COBOSAC also had a separate agenda item on covered bonds. Several multilateral bodies have also put their reports on covered bonds[2].

However, the market did not wait for regulators’ intervention, and in the peak of the liquidity crisis of the NBFCs, covered bonds got uncovered – first slowly, and now, there seems to be a blizzard of covered bond issuances. Of course, there is no legislative bankruptcy remoteness for these covered bonds.

To give a brief understanding of the instrument, a standard covered bond issuance would reflect the following:

Therefore, covered bond is a half-way house, and lies mid-way between a secured corporate bond and the securitized paper. The table below gives comparison of the three instruments:

This article would briefly talk about the issuance of Covered bonds world-wide and in India, and what are the distinctive features of the issuances in India.

Since most volumes for covered bonds came from Europe, there has been a decline due to supply side issues. This is evident from the latest data on Euro-Denominated Covered bonds Volume. The performance in FY 2020 and FY 2021 has been subdued mainly due to COVID-19. Though, the volumes suffered significantly in the Q3 and Q4 of FY 20, but returned to moderate levels by the beginning of FY 2021.

The figure below shows Euro-Denominated Covered bond Issuances until Q2 2021. 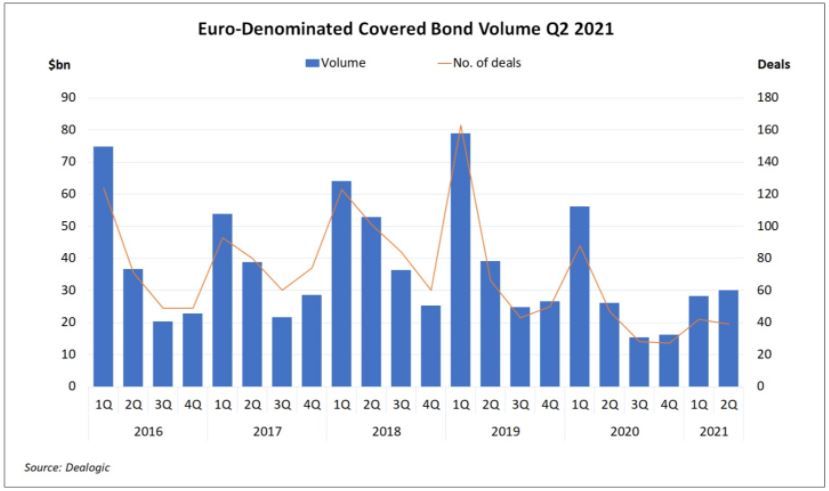 Countries like Denmark, Germany, Sweden continues to be dominant markets for covered bond issuances. The countries in the Asia-Pacific region like Japan, Singapore, and Australia continues to report moderate level of activities. In North America, Canada represents all the whole of the issuance, with no issuances in the USA.

The tables below would show the trend of issuances in different jurisdictions in 2019 (latest available data): 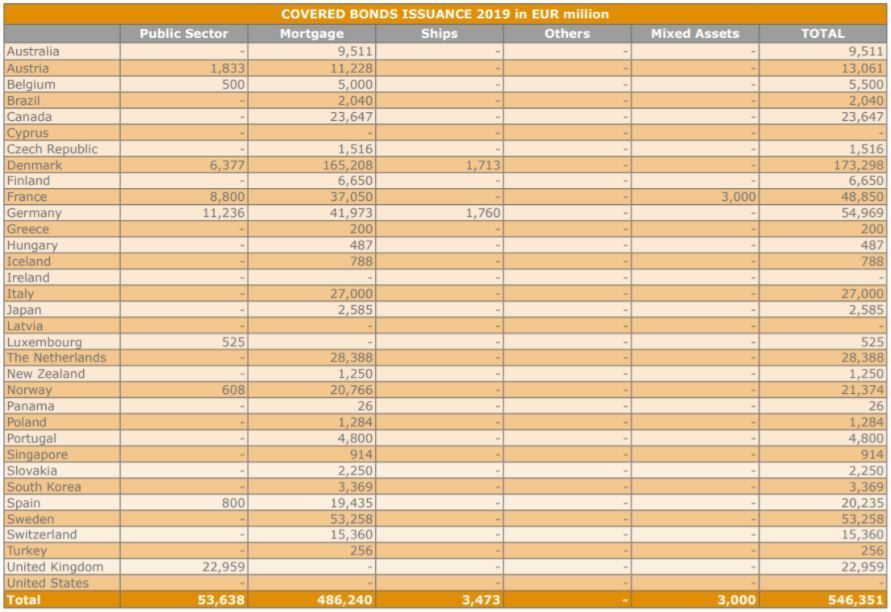 In India, the struggle to introduce covered bonds started way back in 2012, when the National Housing Bank formed a working group[5] to promote RMBS and covered bonds in the Indian housing finance market. Though the outcome of the working group resulted in some securitisation activity, however, nothing was seen on covered bonds.[6]

Some leading financial institutions attempted to issue covered bonds in the Indian market, but they failed. Lastly, FY 2019 witnessed the first instance of covered bonds, which was backed by vehicle loans.

In India, issuance of covered bonds witnessed a sharp growth in FY 2021, as the numbers increased to INR 22 Bn, as against INR 4 Bn in FY 2020. Even though the volume of issuances grew, the number of issuers failed to touch the two-digit mark. The issuances in FY 2021 came from 9 issuers, whereas, the issuances in FY 2020 were from only 2 issuers. Interestingly, all were non-banking financial companies, which is a stark contrast to the situation outside India.

The figure below shows the growth trajectory of covered bonds in India:

The growth in the FY 2021 was catapulted by the improved acceptance in Indian market in the second half of the year, given the uncertainty on the collections due to the pandemic, and the additional recourse on the issuer that the instrument offers, when compared to a traditional securitisation transaction.

Almost 75% of the issuances were done by issuers have ‘A’ rating, the following could be the reasons for such:

In terms of investors too, the Indian market has shown differences. Globally, long term investors like pension funds and insurance companies are the most popular investor classes, however, in India, so far only Family Wealth Offices and High Net-worth Individuals have invested in covered bonds so far.

Another distinct feature of the Indian market is that a significant share of issuances carry market linked features, that is, the coupon rate varies with the market conditions and the issuers’ ability to meet the security cover requirements.

But the most important to note here is that unlike any other jurisdiction, covered bonds don’t have a legislative support in India. In Europe, the hotspot for covered bonds, most of the countries have legislations declaring covered bonds as a bankruptcy-remote instruments. In India, however, the bankruptcy-remoteness is achieved through product engineering by doing a legal sale of the cover pool to a separate trust, yet retaining the economic control in the hands of the issuer until happening of some pre-decided trigger events, and not with the help of any legislative support. In some cases, the legal sale is done upfront too.

Considering the importance and market acceptability of the instrument, rating agencies in India have laid down detailed rating methodologies for covered bonds[7].

Covered Bonds issued in India will not match most of the features of a traditional covered bond issued in Europe, however, the fact that finally the investors community in India has started recognizing it as an investment opportunity is very encouraging.

The real economics of covered bonds will come to the fore only when the market grows with different classes of investors, like the mutual funds, pension funds, insurance companies etc. in the demand side, which seems a bit far-fetched for now.

[1] A working group was constituted by the National Housing Bank to promote RMBS and Covered Bonds, the report of the working group can be viewed here: https://www.nhb.org.in/Whats_new/NHB%20Covered%20Bond%20Report.pdf

[2] In 2014-15, the Asian Development Bank appointed Vinod Kothari Consultants to conduct a Study on Covered Bonds and Alternate Financing Instruments for the Indian Housing Finance Segment

[5] A working group was constituted by the National Housing Bank to promote RMBS and Covered Bonds, the report of the working group can be viewed here: https://www.nhb.org.in/Whats_new/NHB%20Covered%20Bond%20Report.pdf

[6] Vinod Kothari Consultants has been a strong advocate for a legal recognition of Covered Bonds in India. They were involved in the initiatives taken by the NHB to recognize Covered Bonds as a bankruptcy remote instrument in India.

[7] The rating methodology adopted by ICRA Ratings can be viewed here: https://www.icra.in/Rating/ShowMethodologyReport/?id=709

The rating methodology adopted by CRISIL can be viewed here: https://www.crisil.com/mnt/winshare/Ratings/SectorMethodology/MethodologyDocs/criteria/crisils%20criteria%20for%20rating%20covered%20bonds.pdf

Our Video on Covered Bonds can be viewed here <https://www.youtube.com/watch?v=XyoPcuzbys4>

Some resources on Covered Bonds can be accessed here –

The Name is Bond. Covered Bond. By Vinod Kothari: http://www.vinodkothari.com/wp-content/uploads/covered-bonds-article-by-vinod-kothari.pdf

Covered bonds and the COVID disruption