Blog - Latest News
You are here: Home / RBI / RBI eases norms on loans and advances to directors and its related ent...

Section 20 of the Banking Regulation Act, 1949 (hereinafter called the “BR Act”) puts complete prohibition on banks from entering into any commitment for granting of loan to or on behalf of any of its directors and specified other parties in which the director is interested. The Master Circular is in furtherance of the same and specifies restrictions and prohibitions as below – 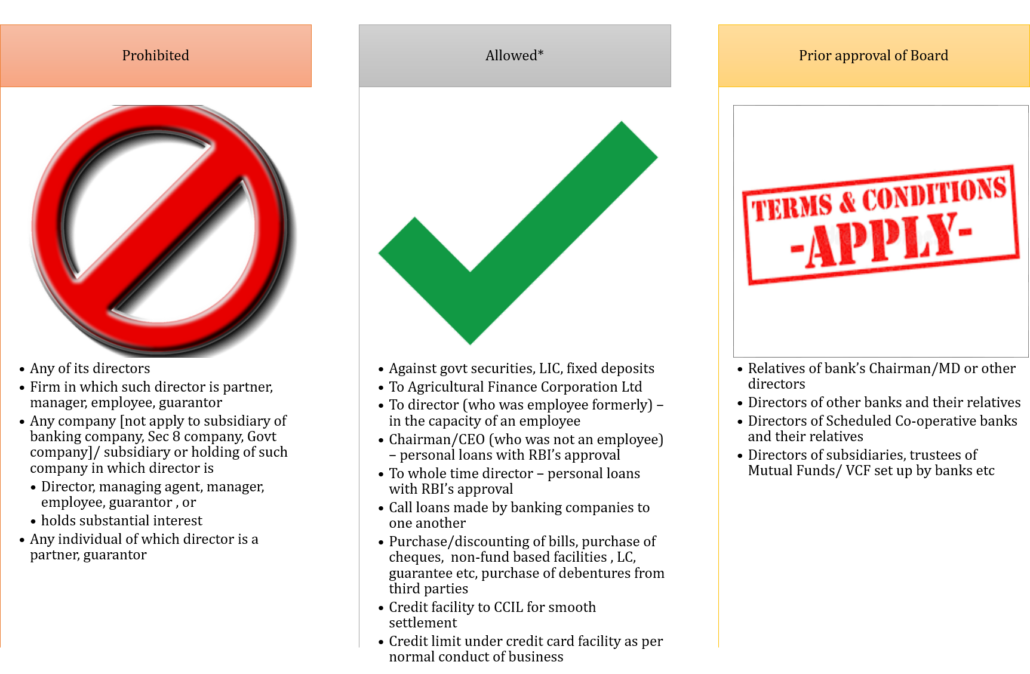 Loans and advances without prior approval of Board

The Master Circular further specifies some persons/ entities that can be given loans and advances upto a specified limit without the approval of Board, subject to disclosures in the Board’s Report of the bank.  The Amendment Notification has enhanced the limits for some classes of persons specified.

Need for such changes

The Master Circular was released on 1st July, 2015, which is more than 5 years from now. Considering the inflation over time, the limits have become kind of vague and ambiguous and required to be revisited. Moreover, the population all over the world is facing hard times due to the Covid-19 outbreak. At this point of time, such relaxation can be looked upon as the need of the hour.

Impact of the phrase ‘Substantial interest’ vs ‘Major shareholder’

The Master Circular uses the term “substantial interest” to generally regulate in the context of lending to companies in which a director is substantially interested.

While the Amendment Notification itself provides for the meaning of “major shareholder”, the meaning of “substantial interest” for the purposes of the Master Circular has to be taken from Section 5(ne) of the BR Act which reads as follows –

The above definition provides for a maximum limit of shareholding as Rs. 5 lacs, exceeding which a company falls into the list of a company in which director is substantially interested. The net effect is that a lot of companies fall into the radar of this provision and therefore, ineligible to take loans or advances from banks.

However, the Amendment Notification provides an explanation to the meaning of “major shareholder” as –

“The term “major shareholder” shall mean a person holding 10% or more of the paid-up share capital or five crore rupees in paid-up shares, whichever is less.”

This eases the strict limits because of which several companies may fall outside the periphery of the aforesaid restriction. Having observed the meaning of both the terms it is clear that while ‘substantial interest’ lays down strict limits and therefore, covers several companies under the prohibition list, the term ‘major shareholder’ eases the limit and makes several companies eligible to receive loans and advances from the bank subject to requisite approvals thereby setting a more realistic criteria.

The BR Act was enacted about half a century ago when the amount of Rs. 5 lacs would have been substantial, but not at the present length of time. Keeping this in mind, while RBI has substituted the requirement of “substantial interest” to “major shareholder” in one of the clauses, the other clauses and the principal Act are still required to comply with the “substantial interest” criteria, thereby, keeping a lot of companies into the ambit of restricted/ prohibited class of companies in the matter of loans and advances from banks.

“Provided that a relative of a director shall also be deemed to be interested in a company, being the subsidiary or holding company, if he/she is a major shareholder or is in control of the respective holding or subsidiary company.”

The Amendment Notification allows the banks to lend upto Rs. 5 crores to directors of other banks provided the same is taken as personal loans. The meaning of “personal loans” has to be taken from the RBI circular on harmonisation of banking statistics which provides the meaning of personal loans as below –

Personal loans refers to loans given to individuals and consist of (a) consumer credit, (b) education loan, (c) loans given for creation/ enhancement of immovable assets (e.g., housing, etc.), and (d) loans given for investment in financial assets (shares, debentures, etc.).

Overall, the Amendment Circular is a welcoming move by the financial market regulator. However, as pointed out in this article, several monetary limits under the BR Act have become completely incohesive and therefore, needs revision in the light of the current situation.

RBI proposes to strengthen governance in Banks
FPI can invest upto the sectoral cap in an Indian Company
Banking exposure to open the current account by the banks
PSL guidelines reviewed for wider credit penetration
NBFCs get another chance to reinstate NOF
Compound interest burden taken over by the Central Government: Lenders required to pass on benefit to borrowers
Regulator’s move to repair the NBFC sector
Originated to transfer- new RBI regime on loan sales permits risk transfers
0 replies