On and from the enforcement of the provisions of the Companies Act, 2103 (the “Act”), statutory auditor of a company is required to be appointed for a fixed term of 5 consecutive years (except in the case of appointment of first auditor and appointment of auditor in Government Company). The said requirement is different from the provisions of corresponding section 224 and 224A of the erstwhile Companies Act, 1956 (“Act, 1956”) where a statutory auditor was appointed year on year basis.

In addition to the introduction of a minimum tenure of 5 years, the Act also brought the concept of mandatory rotation of the statutory auditors so appointed so to ensure the auditors do no develop too much familiarity with the auditee. In fact, the Report[1] of the CII Task Force on Corporate Governance also discussed on the proposal of the rotation of auditors as well as audit partners to discourage any sort of an affinity between the auditors and the company.

The provisions relating to mandatory rotation of the statutory auditors have been provided under section 139(2) of the Act.

“(2) No listed company or a company belonging to such class or classes of companies as may be prescribed, shall appoint or re-appoint–

(a) an individual as auditor for more than one term of five consecutive years; and

(b) an audit firm as auditor for more than two terms of five consecutive years:

Section 139(2) of the Act provides for a mandatory rotation of statutory auditors for the following classes of companies:

(iii) Private companies having paid up share capital of INR 50 crores or more; and

(iv) Companies having paid up share capital of below threshold limit mentioned in (ii) and (iii) above, but having public borrowings from financial institutions, banks or public deposits of INR 50 crores or more.

Once the bar on re-appointment applies; there is a mandatory cooling-off period of 5 years where the outgoing auditor should not be in any way be related to the incoming auditor.

Further, the requirement of appointment of auditors for a minimum tenure as well as the rotational requirement has been exempted for certain classes of companies which have been mentioned below:

Application of rotational requirements during the transitional period

From the date of enforcement of section 139 of the Act, i.e., 1st April, 2014, companies were given a time period of three years to comply with sub-section (2) of the Act. However, considering the practical difficulties, MCA vide its Companies (Removal of Difficulties) Third Order, 2016 amended the transitional provisions of Section 139(2) of the Act to allow companies to comply with the provisions relating to rotation of auditors not later than date of the 1st AGM of the company held after 3 years from the date of commencement of the Act.

With this amendment, it was clarified that the auditor who has utilized the tenure of 5 years or 10 years, as applicable may continue the office till the conclusion of AGM held for the FY ended 31st March 2017 and the company shall appoint new auditor in accordance with section 139 (1) in the same AGM. 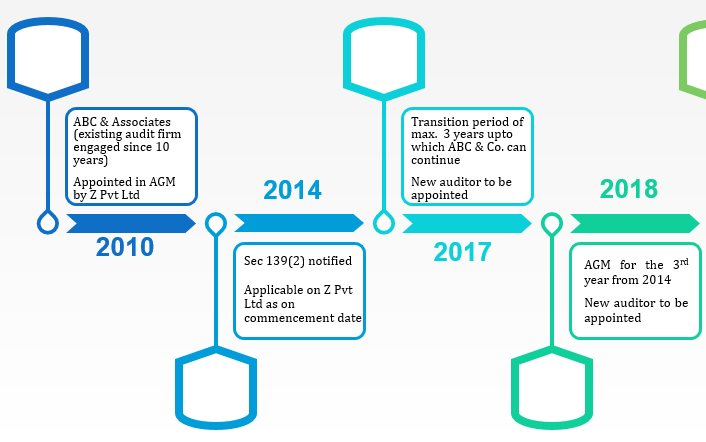 Treatment in case of subsequent applicability of rotational provisions

It is to be noted that the third proviso to sub-section (2) of section 139 contained the provisions to address the first-time applicability on companies on and from the commencement of the said section. It was given to allow smooth transition from the old regime to the new regime. The proviso specifically provided 3 years’ time from commencement of the Act which has expired long back.

Another situation that requires to be addressed is the fate of the auditors of the companies which subsequently get covered under sub-section (2) of section 139.

In this regard, it is important to note the language of the said sub-section states the following:

Addressing the said issue, the view expressed in Ramaiya[2] is that the auditor will have to vacate his office at the next forthcoming AGM of the company, even if the existing term is not complete.

However, we will hold a different view on the same based on the following reasons: 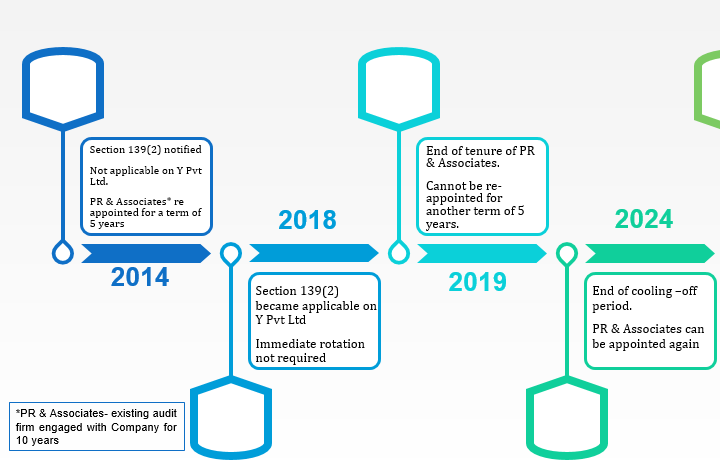 In view of the rationale given above, it can be concluded that since the question of rotation will arise only at the time of appointment or re-appointment which again can only be seen only after the completion of the tenure of 5 years, therefore, the interpretation of requiring the continuing auditor to vacate its office at the ensuing AGM post first time applicability does not seem to be correct.

Our other relevant articles –