Companies with listed but privately placed debt paper not to be regulated as ‘listed company’.

With an intent to promote listing of securities and bond market, Ministry of Corporate Affairs (MCA) in consultation with Securities and Exchange Board of India (SEBI), intended to exclude certain class of companies from the definition of ‘listed company’ as defined under Section 2 (52) of Companies Act, 2013 (CA, 2013). The existing provisions of CA, 2013 applicable to a listed company did not distinguish between private companies and public companies. As a result, private companies were unintendedly subject to similar compliance as a public company. A browse through the list of companies with listed privately placed debentures, shows private companies abound in the list[1].  On the other hand, public companies that listed debt securities on a private placement basis, were subject to similar compliances as a public company issuing debt securities to public.

Accordingly, one of major amendments proposed in Companies (Amendment) Act, 2020 (CAA, 2020) was to revisit definition of listed company and provide a suitable carve out to certain class of companies to be determined in consultation with SEBI.

The rationale behind the carve out, as explained in the Report of the Company Law Committee of November, 2019[2] was that private companies listing its debt securities on any recognized stock exchange were subject to more stringent regulations compared to unlisted private companies viz. appointment of auditors, independent directors, woman directors, constitution of board committees etc. that were dis-incentivizing private companies from seeking listing of their debt securities. This was also discussed in the Report of Company Law Committee in 2016[3] wherein the Committee, while acknowledging the anomaly  in the definition of listed company, felt that while the definition of the term ‘listed company’ need not be modified, the thresholds prescribed for private companies for corporate governance requirements may be reviewed. Further, the Committee proposed that specific exemptions under Section 464 of CA, 2013 could also be given to listed companies, other than equity listed companies, from certain corporate governance requirements prescribed in the Act.

Number of companies, which come under different buckets as per the outstanding value of listed Debt Securities (as per face value) as on December 31, 2020 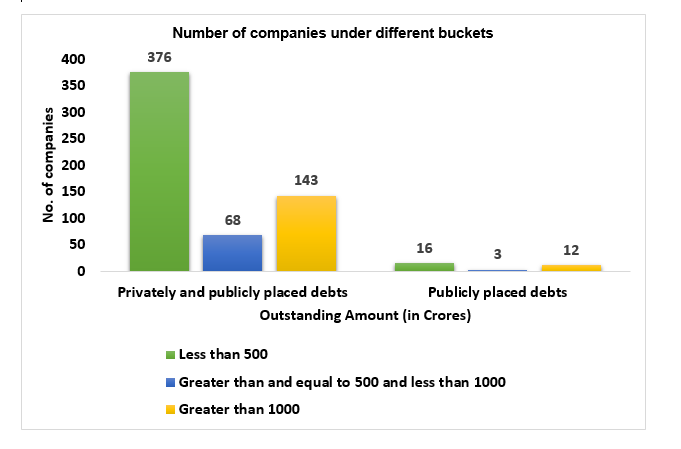 While the amendment made in Section 2 (52) in the definition of ‘listed company’ was notified with effect from January 22, 2021[4], the class of companies were pending to be prescribed. Ministry of Corporate Affairs (MCA) on February 19, 2021[5] notified Companies (Specification of Definition Details) Second Amendment Rules, 2021 effective from April 1, 2021 to insert Rule 2A excluding following class of companies from the definition of ‘listed company’ under CA, 2013

Compliances for listed company under CA, 2013

A listed company is required to ensure following additional compliances under CA, 2013:

With the present amendment, the class of companies provided above will not be required to ensure aforesaid compliances unless it meets other criteria/ thresholds prescribed for respective compliance.

As evident from the table above, a public company will hardly have any exemptions if it meets any of the thresholds specified. While the intent of exempting class of companies is benign, it will be of some benefit to public companies only if the other thresholds are also revised. While, the holy wish is for ease of doing business, static thresholds prescribed in 2013 needs to be revisited to assess the adequacy and the intent to regulate such class of companies. For e.g. public companies having paid up capital of 10 crore or borrowing of Rs. 50 crore is a very common phenomena.

Additionally, in case the sectoral regulator prescribes composition of committee or induction of independent directors or other corporate governance requirement, those will override the exemptions.

Applicability of DRR and DRF[6]

Section 71(4) read with Rule 18(1)(c) of the Companies (Share Capital and Debentures) Rules, 2014 (SHA Rules) requires every company issuing debentures to create a Debenture Redemption Reserve (DRR) of 10% (as the case maybe) of outstanding value of debentures for the purpose of redemption of such debentures.

Some class of companies as prescribed, has to either deposit, before April 30th each year, in a scheduled bank account, a sum of at least 15% of the amount of its debentures maturing during the year ending on 31st March of next year or invest in one or more securities enlisted in Rule 18(1)(c) of SHA (DRF).

Pursuant to the present amendment, it is important to ascertain applicability of creation of DRR and DRF in terms of CA, 2013. The exemption in relation to DRR and DRF was applicable to listed companies in case of private placement. While NBFCs continue to enjoy exemption even in case of unlisted companies, pursuant to the present amendment Non-NBFCs listing NCDS will not be eligible to avail the benefit of the said exemption and will be required to maintain DRR and DRF.

The intent of MCA at the time of amending Rule 18 of Companies (Share Capital and Debentures) Rules, 2014 was to extend the exemption to all listed companies i.e. companies having securities listed on stock exchange, in case of privately placed debentures, from maintenance of DRR and DRF.

The intent behind amending the definition of ‘listed company’ under 2 (52) was to reduce the compliance burden of debt listed entities that were regarded as listed entities merely by virtue of listing the privately placed debentures.

This is surely a matter of representation to be made to MCA as the gap seems inadvertent and not intentional.

Applicability of Rule 9A of PAS Rules

Section 29 of CA, 2013 read with Rule 9A of Companies (Prospectus and Allotment of Securities) Rules, 2014 (PAS Rules)[7] effective from October 2, 2018 mandates unlisted public companies to issue the securities only in dematerialised form and facilitate dematerialisation of all its existing securities. Physical transfer of securities is prohibited for unlisted public companies. Compliance with the said provisions are exempt only in case of a Nidhi, Government company and wholly owned subsidiary.

Pursuant to amendment in the definition of listed company, public companies that were originally exempted from the requirements by virtue of being a listed company, will now be required to comply with Section 29 and Rule 9A.

‘Listed entity’ as defined under Reg. 2 (p) of SEBI (Listing Obligations and Disclosures Requirements) Regulations, 2015 (Listing Regulations) means an entity which has listed, on a recognised stock exchange(s), the designated securities issued by it or designated securities issued under schemes managed by it, in accordance with the listing agreement entered into between the entity and the recognised stock exchange(s).

“proposed to be listed” shall include securities of an unlisted company:

(i) if such unlisted company has filed offer documents or other documents, as the case may be, with the Board, stock exchange(s) or registrar of companies in connection with the listing; or

However, that is not the intent of law. If a security is listed, its price is subject to change and be impacted by price sensitive information. Accordingly, such exclusively debt/ NCRPS listed companies, on account of private placement of securities, should continue to comply with the requirements of PIT Regulations. SEBI may also consider furnishing a clarification in this regard.

While, the present amendment expands the originally envisaged carve out for private companies to public companies as well, given the other static thresholds prescribed under CA, 2013 public companies have little reason to rejoice. Exemption to comply with PIT Regulations may be a huge relief, however, there is a need for SEBI to clarify the position given the intent of law.

Further, it is very crucial that MCA revisits DRR and DRF related provision for privately placed NCDS and consider to relax the same especially for the benefit of Non-NBFCs. Lastly, suitability of the exemption in case of companies exclusively listed in foreign jurisdiction will be required to be evaluated after a certain lapse of time as the provisions have been recently inserted in CA, 2013.

Our other videos and write-ups may be accessed below:

Other write-up relating to corporate laws:

Our  our Book on Law and Practice Relating to Corporate Bonds and Debentures, authored by Ms. Vinita Nair Dedhia, Senior Partner and Mr. Abhirup Ghosh, Partner can be ordered though the below link:

[2] Ministry of Corporate Affairs, Government of India, ‘Report of the Companies Law Committee’

[3] Ministry of Corporate Affairs, Government of India, ‘Report of the Companies Law Committee’

[6] Refer our write up ‘Easing of DRF’ and ‘Provisions relating to DVR & DRR- stands amended’ by CS Smriti Wadehra.

[7] Discussed in our write up ‘Physical to Demat: A move from opacity to transparency’.