To improve the efficacy and provide better customer service

What is Grievance Redress Mechanism (‘GRM’)

GRM means the receipt and processing of complaints from the customer and taking necessary actions to address the same. The GRM of any organization is the gauge to measure its efficiency and effectiveness and provides a picture on how the banks value its customer.

Banks are in service organization. Customer satisfaction and loyalty is prime focus of any bank. Customer complaints are the part and parcel of day to day functioning of banks in India. To address this Reserve Bank of India (‘RBI’) had taken various initiatives over the years for improving customer service and GRM in banks which are as follows:

It is evident from the increasing number of complaints received in the Offices of Banking Ombudsman (‘OBOs’)[2] as per Annexure-1, that greater attention by banks to this area is warranted. More focused attention to customer service and grievance redress was required to ensure satisfactory customer outcomes and greater customer confidence.

Hence, with a view to strengthen and improve the efficacy of the internal GRM of the banks and to provide better customer service RBI vide its press release dated December 04, 2020 w.r.t Statement on Developmental and Regulatory Policies[3] decided:

The aforesaid framework was introduced by RBI on January 27, 2021 vide its notification w.r.t Strengthening of GRM in Banks[4]. The same shall be effective from January 27, 2021 and applicable to all scheduled commercial banks (excluding regional rural banks).

The write-up below shall discuss the framework introduced by RBI and actionables required at the end of the banks.

RBI proposes to strengthen GRM in the following areas: 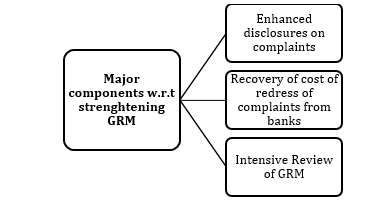 Currently, banks were required to make disclosure regarding customer complaints and grievance redress in their annual report in terms of Para 16.4 w.r.t Analysis and Disclosure of complaints – Disclosure of complaints / unimplemented awards of Banking Ombudsmen along with Financial Results of the Master Circular on ‘Customer Service in Banks’ dated July 01, 2015[5] which are as follows:

(a) No. of complaints pending at the beginning of the year;

(b) No. of complaints received during the year;

(c) No. of complaints redressed during the year;

(d) No. of complaints pending at the end of the year;

B. Awards passed by the Banking Ombudsman

(a) No. of unimplemented Awards at the beginning of the year;

(b) No. of Awards passed by the Banking Ombudsmen during the year;

(c) No. of Awards implemented during the year;

(d) No. of unimplemented Awards at the end of the year.

The same is now replaced by the set of granular disclosures to be made by banks in their annual reports as per Annexure 2. These disclosures are intended to provide to the customers of banks and members of public greater insight into the volume and nature of complaints received by the banks from their customers and the complaints received by banks from the OBOs, as also the quality and turnaround time of redress.

II.         Recovery of cost of redress of complaints from banks

Presently, redress of complaints under BO Scheme, 2006[6] (‘BOS’) is cost-free for banks as well as their customers. With a view to ensure that banks discharge this responsibility effectively, the cost of redress of complaints will be recovered from those banks against whom the maintainable complaints[7] in the OBOs exceed their peer group average as provided below. However, grievance redressal under BOS for customers will continue to remain cost-free.

The cost-recovery framework for banks, peer groups based on the asset size of banks as on March 31 of the previous year will be identified, and peer group averages of maintainable complaints received in OBOs would be computed on the following three parameters: 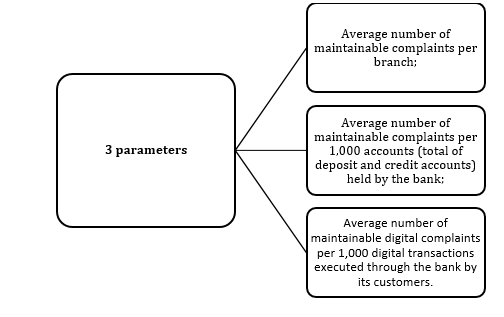 The cost of redressing complaints in excess of the peer group average will be recovered from the banks as follows:

·        Excess in any one parameter: 30% of the cost of redressing a complaint[8] (in the OBO) for the number of complaints in excess of the peer group average;

·        Excess in any two parameters: 60% of the cost of redressing a complaint for the number of complaints exceeding the peer group average in the parameter with the higher excess;

·       Excess in all the three parameters: 100% of the cost of redressing a complaint for the number of complaints exceeding the peer group average in the parameter with the highest excess.

RBI will undertake, as a part of its supervisory mechanism, annual assessments of customer service and grievance redressal in banks based on the data and information available through the CMS, and other sources and interactions.

Banks who are identified as having persisting issues in grievance redress will be subjected to an intensive review of their GRM to better identify the underlying systemic issues and initiate corrective measures. The intensive review shall include but not limited to the following area:

Based on the review, a remedial action plan will be formulated and formally communicated to the banks for implementation within a specific time frame. In case no improvement is observed in the GRM within the prescribed timelines despite the measures undertaken, the banks will be subjected to corrective actions through appropriate regulatory and supervisory measures.

Actionable required at the end of the Banks:

To provide disclosure in the revised format on complaints received by the bank from customers and from the OBOs in the annual report from FY 20-21;

RBI with a view to strengthen and protect the consumers has laid down the aforesaid framework. This will make banks more vigilant to avoid any levy of the cost and supervisory action by RBI.

Annexure A: Chart representing number of complaints received by OBOs 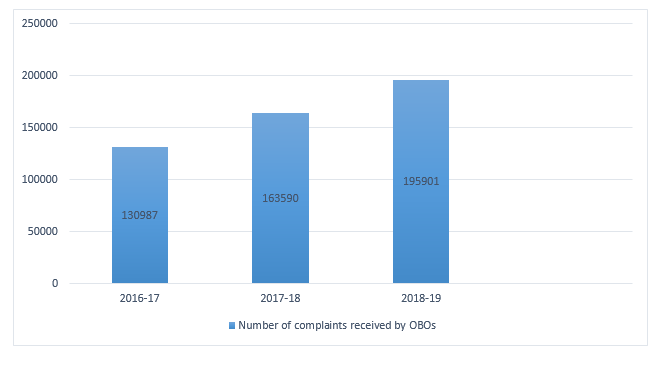 Annexure 2: Part A w.r.t Summary information on complaints received by the bank from customers and from the OBOs

·         Exchange of coins, issuance/acceptance of small denomination notes and coins;

·         Facilities for customers visiting the branch/adherence to prescribed working hours by the branch, etc.;

[7] Maintainable complaints refer to complaints on the grounds specifically mentioned in BOS 2006 and are covered 1301within the ambit of the Scheme.

[8] Average cost of handling a complaint at the OBOs during the year.

About time to unfreeze NPA classification and reporting Budget Highlights: 2021-22
Scroll to top