Co-lending is coming together of entities in the financial sector – mostly, something that happens between banks and NBFCs, or larger banks and smaller banks. Financial interfaces between different financial entities may take the form of securitisation, direct assignment, co-lending, banking correspondents, loan referencing, etc.

While direct assignment and securitisation have been around for quite some time, co-lending was permitted by the RBI under its existing guidelines on ‘Co-origination of loans between banks and NBFC-SIs for granting loan to the priority sector’[1]. As per the Statement on Developmental and Regulatory Policies issued by the RBI dated October 9, 2020, it was decided to expand the scope of co-lending, currently permitted only for NBFC-SIs, to all NBFCs. Accordingly, the RBI came, vide notification on co-lending by banks and NBFCs (Co-Lending Model/CLM)[2] dated November 5, 2020, with a new regulatory framework for co-lending, of course, in case of priority sector loans. The CLM supersedes the existing guidelines on co-origination.

There is no clarity, still, on whether the non-priority sector loans (PSL  or Non-PSL) will also be covered by this regulatory discipline, or any discipline for that matter. In this write-up, we explore the key features of the co-lending regime, and also get into tricky questions such as applicability to non-PSL loans, the borderlines of distinction between direct assignments and co-lending, the sharing of risks and rewards, etc.

The erstwhile Regulations for priority sector lending covered co-lending transactions of Banks and Systemically Important NBFCs. However, under the Co-Lending Model.The CLM covers all NBFCs (including HFCs) in its purview.

There is a whole breed of new-age fintech companies using innovative algo-based originations, and aggressively using the internet for originations, and these companies pass a substantial part of their lending to either larger NBFCs or to banks. Thus, the expanded ambit of the Co-Lending Model will increase the penetration and result into wider outreach, meet the objective of financial inclusion, and potentially, reduce the cost for the ultimate beneficiary of the loans. Smaller NBFCs have their own operational efficiencies and distribution capabilities; hence, this is a welcome move.

An interesting question that comes up here is whether such exclusion should be construed as a restriction on such entities from entering into co-lending transactions, or a relaxation from the applicability of the Co-Lending Model? It may be noted that the CLM a precondition for PSL treatment of the loans. This is clear from the title ‘Co-Lending by Banks and NBFCs to Priority Sector’. The intent is not to put a bar on existence of co-lending arrangements outside the CLM. That is to say, if the loan, originated by the principal co-lender, is a priority sector loan, then the participating co-lender will also be able to treat the participant’s share of the loan as a PSL, subject to adherence to the conditions specified in CLM. The implication of this is that where the loan does not meet the conditions of CLM, then the participating bank will not be able to accord a PSL status, even though the loan in question is a PSL loan.

With that rationale, in our view, there is no absolute prohibition in the excluded banking entities from being a co-lender. However, if the major motivation of the co-lending mechanism under the CLM is the PSL tag, that tag will not be available to the excluded banks, and hence, the very inspiration for falling under the arrangement may go away. This is also clear from the PSL Master Directions[3] which recognises co-origination of loans by SCBs and NBFCs for lending to the priority sector and specifically excludes RRBs, UCBs, SFBs and LABs.

Applicability date and the fate of existing transactions

In the absence of any specified timelines, the CLM supersedes the existing co-lending guidelines with immediate effect. However, it specifies that outstanding loans in terms of the erstwhile guidelines would continue to be classified under priority sector till their repayment or maturity, whichever is earlier.

As we note below, one of the very important features of the Co-Lending Model is that risk-sharing and loan-sharing do not have to follow the same proportion. Additionally, it is possible for the participating bank to have an explicit recourse against the originating co-lender. This feature was not available under the earlier framework. This alone may be a sufficient motivation for existing CLMs to be revised or redrawn. 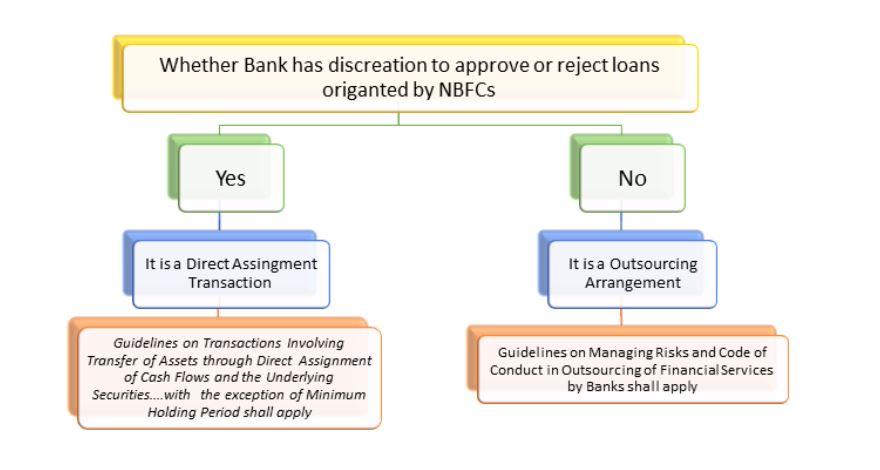 For the purpose of entering into co-lending transactions, banks and NBFCs will have to enter into a ‘Master Agreement’. Such agreement may require the bank either to mandatorily take the loans originated by the NBFC on its books or retain discretion as to taking the loans on its books.

Where the participating bank has a discretion as to taking its share of the loans originated by the originating partner, the transaction partakes the character of a direct assignment. Para 1(c) of the CLM says that ”…if the bank can exercise its discretion regarding taking into its books the loans originated by NBFC as per the Agreement, the arrangement will be akin to a direct assignment transaction. Accordingly, the taking over bank shall ensure compliance with all the requirements in terms of Guidelines on Transactions Involving Transfer of Assets through Direct Assignment of Cash Flows and the Underlying Securities….with the exception of Minimum Holding Period (MHP) which shall not be applicable in such transactions undertaken in terms of this CLM.

That would mean, a precondition for the arrangement being treated as a CLM is that the participating bank takes the loans originated by the originating partner without discretion exercisable on a cherry-picking basis.

Does this mean that irrespective of whether the loan originated by the originating partner fits into the credit screen of the bank or not, the bank will still have to take it, lying low? certainly, this is not the intent of the CLM This is what comes form clause 1(a)- ‘…..the partner bank and NBFC shall have to put in place suitable mechanisms for ex-ante due diligence by the bank as the credit sanction process cannot be outsourced under the extant guidelines.’

The conclusion one gets from the above is as follows:

It is important to note that if DA comes into play, the requirements such as MHP, MRR, true sale conditions will also have to be complied with. However, co-lending transactions do not have any MHP requirements, unlike in case of either DA or securitiastion. Of course co-lending transactions do have a risk retention stipulation, as the CLM require a 20% minimum share with the originating NBFC. Hence, the intent of the RBI is that co lending mechanism must not turn out to be a regulatory arbitrage to carry out what is virtually a DA, through the CLM.

Para 1 c. of the Annex seems to be leading to a completely new model of direct assignments – direct assignments without a holding period, or so-called on-tap direct assignments. Reading para 1 c. suggests that while co-lending takes the form of a loan sharing at the very inception, the reference in para 1 c. is to loans which have already  been originated by the NBFC, and the participating bank now cherry-picks some or more of those loans. The cherry-picking is evident in “if the bank can exercise its discretion regarding taking into its books the loans originated by NBFC”. However, unlike any other direct assignment, this assignment happens on what may be called a back-to-back arrangement, that is, without allowing for lapse of time to see the loan in hindsight.

In essence, there emerge 3 possibilities:

The on-tap assignment referred to above seems to be subject to all the norms applicable to a direct assignment, other than the minimum holding period.

The erstwhile guidelines require that the interest rate charged on the loans originated under the co-lending guidelines would be calculated as per Blended Interest Rate Calculations, that is to say the rate shall be calculated by assigning weights in proportion to risk exposure undertaken by each party, to the benchmark interest rate of the respective lender.

This change would provide flexibility to the lenders and also ensure that the cost incurred in tracing and disbursals to remote sectors as well as enhanced risk exposure is appropriately compensated.

Under the erstwhile provisions, it was mandatory that the share of the co-lending NBFC shall be at least 20%. The same has been retained in the CLM as well, requiring NBFCs to retain a minimum of 20% share of the individual loans on their books.

Under the CLM, the co-lending NBFC shall be the single point of interface for the customers. Further, the grievance redressal function would also have to be carried out by the NBFC.

For the purpose of disbursals, collections etc. an escrow account should be opened. The co-lending banks and NBFCs shall maintain each individual borrower’s account for their respective exposures. It is only for the purpose of avoiding commingling of funds, that an escrow mechanism is required to be placed. The bank and NBFC shall, while entering into the Master Agreement, lay down the rights and duties relating to the escrow account, manner of appropriation etc.

The manner of creation of charge on the security provided for the loan shall be decided in the Master Agreement itself.

Each of the lenders shall record their respective exposures in their books. The asset classification and provisioning shall also be done for the respective part of the exposure. For this purpose, the monitoring of the accounts may either be done by both the co-lenders or may be outsourced to any one of them, as agreed in the Master Agreement. Usually, the function of monitoring remains with the NBFC (since, it has done the origination and deals with the customer.)

Non-PSL loans: whether the framework would apply in pari materia?

The guidelines on CLM have been issued for co-lending of loans that qualify for the purpose of priority sector lending. This does not bar lenders from entering into co-lending transactions outside the purview of these guidelines. The only difference it would make is such loans would not be eligible to be classified as loans to the priority sector (which is the primary motive for banks to enter into co-lending transactions).

Co-lending arrangement between Banks and NBFCs for PSL

Summary of the cartload of amendments introduced towards DTs and corporate ... Corporate Restructuring- Corporate Law, Accounting and Tax Perspective
Scroll to top