In a first of its kind, the Hon’ble National Company Law Tribunal, Bengaluru Bench vide its order dated 16th November, 2020, in the matter of Synew Steel Private Limited[1], has ordered for direct dissolution from CIRP, thereby waiving off the mandatory requirement to undergo the liquidation process.

In this article, the author makes a humble attempt to analyse this rather path-breaking order, and the implications it may carry.

The Insolvency and Bankruptcy Code, 2016 (‘Code’/ ‘IBC’) lays down an established process flow for distressed companies, which entails a compulsory insolvency resolution process prior to liquidation, and the final dissolution only after completion of such liquidation process. Thus, as per the widely accepted understanding of this hierarchy of processes, every company dissolved pursuant to the Code has to mandatorily undergo the preceding CIRP and liquidation process.

However, there may be some cases wherein the CIRP and/ or liquidation process would not be purposeful, and hence not warranted at all- a common example being nil assets in the company. Where the company has nil assets, there is practically nothing left to resolve and/ or realise. As a result, the odds of receiving a resolution plan during CIRP, or realization during liquidation seems certainly negative. Thus, a prima-facie stance would be in favour of a dissolution without liquidation.

At this juncture, one may refer to section 33 (2) of the Code, which provides that-

“Where the resolution professional, at any time during the corporate insolvency resolution process but before confirmation of resolution plan, intimates the Adjudicating Authority of the decision of the committee of creditors [approved by not less than sixty-six per cent. of the voting share] to liquidate the corporate debtor, the Adjudicating Authority shall pass a liquidation order as referred to in sub-clauses (i), (ii) and (iii) of clause (b) of sub-section (1)[2]”

However, while section 33 (2) of the Code, and regulation 14 of the Liquidation Regulations allow early completion of the CIRP and liquidation period, respectively, the sequence of processes is not compromised- hence, irrespective of the outcome, liquidation process shall necessarily ensue.

In this backdrop, it may be appreciated where the corporate debtor has no assets, the liquidation period of one year only implies zero returns with superfluous costs such as liquidator’s fee, public notice etc- which, in fact is in deviation with the Code’s cardinal principle of value maximization.

It is in this pretext that in the instant case of Synew Steel Private Limited, the Hon’ble NCLT held that “…the ultimate objective of the Code is either to resolve the issue by way of a Resolution Plan or to dissolve the Corporate Debtor, as expeditiously as possible. If the facts and circumstances of a case justify that no purpose would be served to keep the Corporate Debtor under regular CIRP proceedings, and thereafter under Liquidation proceedings, under the provisions of the Code, the Adjudicating Authority, by exercising its inherent powers conferred under the Act, may pass appropriate order(s) in the interest of speedy justice.”

Thus, while the basis and rationale behind the direct dissolution comes clear from the above observation, it may be interesting to see the various provisions of law that drive the stance taken by the Hon’ble Bench- 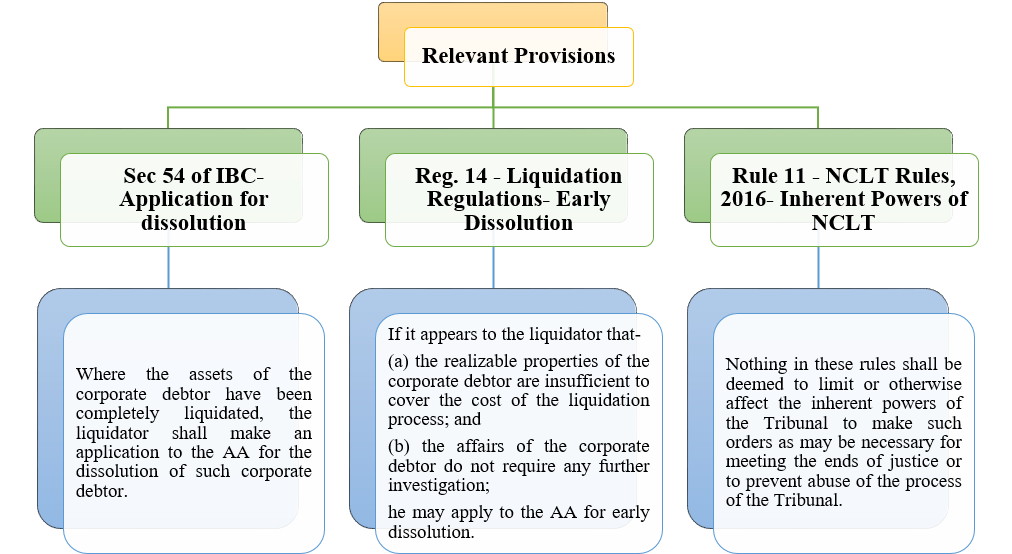 Implications- A burial without death?

While the order, a first of its kind, seems to be in sync with the objectives of the Code, another perception of a direct dissolution may be a “disguised strike-off”. Amongst the several exit routes available for a company, IBC is only the mode opted by distressed companies; whereas, the other modes inter-alia striking off is available for solvent companies[4].

In the context of this article, one may note that a direct dissolution could be placed on the same pedestal as striking off u/s 248 of the Companies Act, 2013, however, without the pre-requisite of having nil liabilities- thus making it more convenient for distressed companies.  It must be noted that for filing an application under section 248 (2), a company is required to extinguish all its assets and third party liabilities- the objective being to ensure that no stakeholder of the company is prejudiced on account of the striking-off. However, where the result of striking off is obtained with over-burdening liabilities, removal of this otherwise mandatory pre-requisite would require critical scrutiny.

At the outset, if the direct dissolution route were to be standardized, companies having nil assets, but significant outstanding dues (greater than Rs. 1 crore), could simply file an application under section 10 of the Code, obtain the benefit of the moratorium and thereafter proceed for direct dissolution.

In such circumstances, it shall become very important to understand the reason for nil liabilities- whether the assets washed off organically, or were hived off to jeopardize the interests of the creditors. This would warrant a critical examination of the transactions of the company, leading to the washout of assets, and whether such transactions fall under the purview of avoidance transactions under section 43, 45, 49 and 66- If it so happens that the assets were in fact hived off, it would be necessary to route back the assets to the corporate debtor to be distributed to the creditors during the liquidation process.

Thus, while being cautiously appreciative of the instant order, it is important that the prospect of direct dissolution is not misused as a tool to wash off liabilities under the guise of the Code. The same would also be a crucial factor for consideration by the adjudicating authority before passing the final dissolution order.

In this pretext, while the order of Hon’ble NCLT seems to be in line with the objectives of Code and saves cost and time incurred in the unfruitful dissolution process, it becomes necessary to ensure that the nil-asset status of the corporate debtor is genuine and not a wrongful disposal to get wash off unpaid liabilities.

[2] As per explanation to section 33 (2), the decision for early liquidation of the corporate debtor can be taken by the committee of creditors (CoC) any time between after its constitution and before preparation of the information memorandum

[4] For a detailed discussion on modes of exit for companies, see our article Ease of Exit for businesses in India.

MCA need not be mandatorily impleaded in applications: NCLAT sets-aside directions issued by of Principal Bench
Mandatory impleadment of MCA as a Respondent- Principal Bench issues direction to all NCLTs
An Odd Scheme: Case for exclusion of schemes of arrangement from scheme of liquidation
Ease of Exit of Businesses in India
ARCs and Insolvency Resolution Plans - The Enigma of Equity vs Debt
Bringing pre-packs to India: a discussion on the way forward
Schemes under Section 230 with a pinch of section 29A – Is it the final recipe?
Recent trends in IBC
1 reply