Blog - Latest News
You are here: Home / Housing finance / RBI all set to regulate the HFCs

The provisions of National Housing Bank Act, 1987 were amended w.e.f August 09, 2019 pursuant to the Finance Act, 2019 thereby shifting the power to govern Housing finance Companies (HFCs) from National Housing Bank (NHB) to the Reserve Bank of India (RBI). Consequently, the RBI on June 17, 2020, issued a draft for review of extant regulatory framework for HFCs[1] (‘Proposed Framework’), and had invited comments from the industry on the same. After considering the inputs received from the industry, the RBI, on October 22, 2020 issued the Regulatory Framework for HFCs[2] (‘Regulations’).

The Regulations state that the existing guidelines issued by the NHB applicable to HFCs shall continue to be applicable unless the relevant provision has been provided for in the Regulations.

Though all major provisions have already been covered in the Regulations, however, certain aspects shall continue to be governed by NHB regulations such as provisions relating to transfer to reserve fund, maintenance of percentage of assets and concept of Tier I and Tier II capital. Better clarity in regards to the extant regulations that would continue to apply to HFCs would be apparent once the revised Master Directions for HFCs is issued.

Are exemptions from provisions of the RBI Act really exemptions?

The Regulations exempt HFCs from complying with the provisions of Chapter III B of the Reserve Bank of India Act, 1934 (RBI Act), except for the registration and Net Owned Funds (NOF) requirements. Further, specific exemption has been granted from the provisions of section 45-IB and 45-IC of the RBI Act, in place of which section 29B and 29C of the National Housing Bank Act, 1987 (NHB Act) shall continue to remain applicable.

Sections 29B and 29C of the NHB Act contain the same provisions as that of sections 45-IB and 45-IC of the RBI Act respectively. Hence, in essence there is no separate requirement for HFCs and the same is in line with the corresponding provisions applicable on NBFCs.

Accordingly, both NBFCs and HFCs will be on the same page since the provisions of section 45-IB and 45-IC of RBI Act are corresponding to that of section 29B and 29C of NHB Act.

Para 3 of the Proposed Framework stated that harmonisation of certain provisions such as capital adequacy requirements, Income Recognition, Asset Classification and Provisioning (IRACP) norms, concentration norms, limits on exposure to Commercial Real Estate (CRE) & Capital Market (CME) etc. shall be done in a phased manner. The Regulations, with respect to para 3, have remained silent for the time being and have stated that the same shall be issued in the upcoming two years. 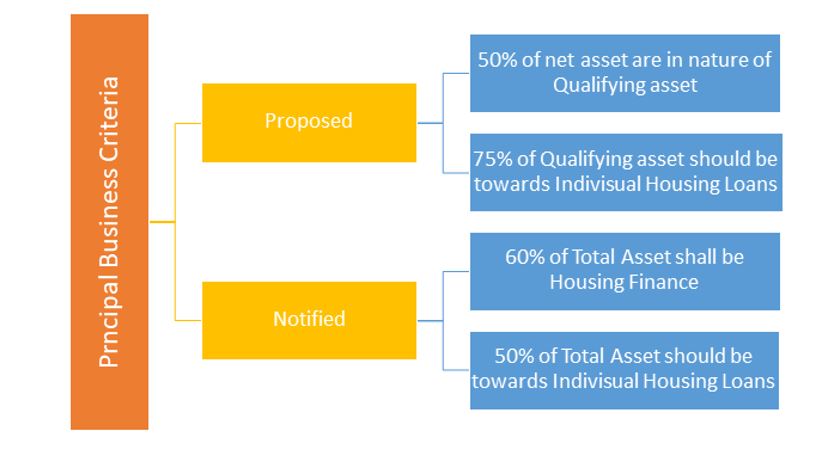 As per the Regulations, in order to be classified as an HFC, following criteria shall be required to be satisfied:

Prior to the amendment in the Finance Act, the term ‘principal business’ was not referred to in the NHB Act. For the purposes of registration, NHB was recognizing companies as HFCs if such a company had, as one of its principal objects, transacting the business of providing finance for housing (directly or indirectly).  Now, the identification and registration of an HFC shall be based on meeting the PBC rather than just mentioning the same as one of the principal objects in its charter documents. Further, the requirement of minimum concentration towards ‘individuals’ is a new concept and possibly to protect the HFCs from systemic exposures.

The PBC prescribed in the Proposed Framework stated that at least 50% of ‘net assets’ shall be in the nature of qualifying assets. However, the income criteria was based on total income. Net assets means total assets reduced by cash and bank balances and money market instruments. However, gross income would include interest and other income earned from bank balances and money market instruments as well, that have been excluded from the computation of net assets. Hence, there was no parity between both the comparative bases. Vinod Kothari Consultants (VKC) had sent recommendation to the RBI suggesting to bring both the bases at parity. The RBI has considered the same and has accordingly revised the bases to total asset and total income. A company will be treated as an NBFC if its financial assets are more than 50 per cent of its total assets (netted off by intangible assets) and income from financial assets should be more than 50 per cent of the gross income. Further, for an HFC, it must have 60% of the total asset towards providing finance for housing and 50% of the total assets towards individual housing finance.

Timeline for achieving the PBC

Existing HFCs, which currently do not fulfill the said criteria shall meet the same within the above mentioned timelines. For this purpose, the HFCs shall be required to submit a Board approved roadmap (as discussed in the ‘Actionables Box’). In case of failure to do so/achieve the PBC specific to housing loans as per the timelines, the HFC shall be treated as NBFC – Investment and Credit Companies (NBFC-ICC) and shall be required to approach the RBI for conversion to NBFC-ICC.

The definition of Housing Finance provided in the Regulations is the same as that provided in the Proposed Framework for ‘qualifying asset’. Further, there is a clarification provided in the Regulations stating- “Integrated housing project comprising some commercial spaces (e.g. shopping complex, school, etc.) can be treated as residential housing, provided that the commercial area in the residential housing project does not exceed 10 percent of the total Floor Space Index (FSI) of the project.”

The aforesaid concept of integrated housing project has been drawn from the NHB Directions.

The detailed analysis of the definition of qualifying asset as compared to the erstwhile definition of Housing Finance may be referred here- http://vinodkothari.com/2020/06/comparison-between-the-proposed-and-existing-regulatory-framework-for-hfcs/

The Proposed Framework stated that HFCs shall maintain a minimum NOF of Rs. 20 crores of more. The same has been retained in the Regulations. The existing NOF requirements for HFCs is Rs. 10 crores and hence, existing HFCs having a lower NOF shall be required to increase their NOF to Rs. 15 crores by March 31, 2022 and Rs. 20 crores by March 31 2023. Further, they are required to submit a statutory auditor’s certificate (as discussed in the ‘Actionables Box’). In case of failure to do so, the registration of the HFC shall be cancelled/ converted into NBFC-ICC upon request of the HFC for the same.

Definition of Tier I and Tier II Capital

The Proposed Framework provided for inclusion of PDIs in the definition of TIer I and Tier II Capital. The Regulations are silent on the same, hence, the existing definition as per the NHB Directions shall continue to be applicable 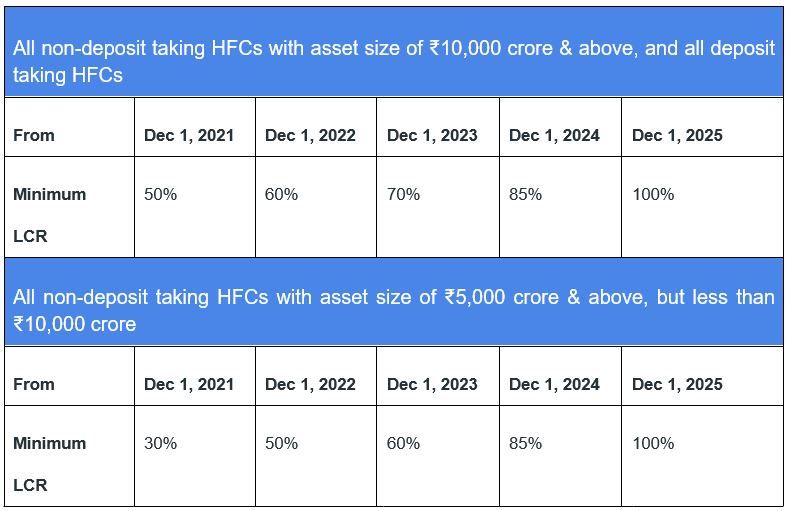 It is noteworthy here that while the milestones for NBFC start from December 1, 2020, the milestones for HFCs shall commence from December 1, 2021. The LRM and LCR framework for NBFCs was introduced on November 4, 2020 and NBFCs were given a time period of more than a year to implement the LCR. Similarly, HFCs have also been given time to implement the same.

The Proposed Framework provided for restriction on dual financing i.e. HFCs may choose to lend only at one level. That is, the HFC can either undertake an exposure on the group company in real estate business or lend to retail individual home buyers in the projects of group entities, but not do both.

The Proposed Regulations lacked clarity as to whether it extends to all kinds of group entities or only such entities which are engaged in real estate. VKC had made a recommendation to clarify the same since the Proposed Regulations used the phrase “HFC decides to take any exposure in its group entities”. It now seems clear that the intention is to cover in general all companies in a group engaged in real estate business and not just the group of the respective HFC.

Considering the requirement for HFCs to do lend a major part of their portfolio to individuals and this restriction on dual financing, it seems that builder lending will be discouraged. In the present state of housing industry in the country, this should not be the intention of the regulator.

Further, the maximum exposure an HFC may have on a single entity in a group of companies shall be 15% of its owned funds and for the group shall be 25% of owned funds. These provisions are similar to the concentration norms applicable to NBFCs. However, these refer to exposure to a group engaged in real estate business. Further, the RBI shall release concentration norms for all exposures of HFCs in due course of time.

The following LTV requirements have been laid down in the Regulations:

A quick comparative of the provisions applicable for HFCs and NBFCs can be seen below: