You are here: Home / financial disclosures

It will be ironic to the extent of being harsh to say that the Covid outbreak is a brutal reminder that mankind needs to ensure a balance between economic growth and environmental conservation. Environmental, Social and Governance (“ESG”) concerns have sharply risen globally, underscoring the financial relevance of various non-financial elements impacting business in several ways. In this scenario, one of the key areas of concern has been climate change. The United Kingdom (“UK”) recently proposed[1] significant changes in the regulatory framework in order to include mandatory climate-related financial disclosures in the regulatory regime. This article discusses the legislative measures proposed in the UK, and takes a look at what other countries are doing in this regard.

Studies have shown that global temperature rises will negatively impact GDP in all regions by 2050 whereas economies in southeast Asia (ASEAN) countries would be hit hardest. If climate risks are not properly managed, the Intergovernmental Panel on Climate Change estimates $69 trillion in global financial losses by 2100 from a 2-degree warming scenario. The Paris Agreement of 2016 was the first integrated approach towards recognizing the impact of climatic change and the need for taking an ambitious approach towards combating its ill effects. It is a legally binding international treaty on climate change adopted by 196 signatory countries around the world, India being one of them. Achieving targets set under the Agreement may prevent a significant global GDP loss while crossing these limits may drag the global economy to a doom. The below table shows the significant impact of global temperatures on global GDP. 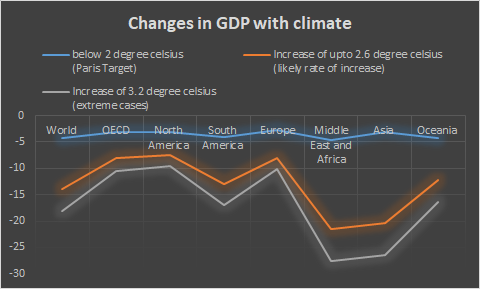 Where countries around the world have a rather limited approach to climate disclosure, UK[2] has gone one step further, proposing mandatory reporting by companies on climate changes and becoming the first country to do so. It won’t be long before market regulators across the globe, including India, take steps to adopt the same in their homeland.

In this background, let us understand the scope of reporting proposed by the UK, compared to the scope of climatic disclosures covered by India’s BRSR and the global reporting framework.

Background of the UK Proposal 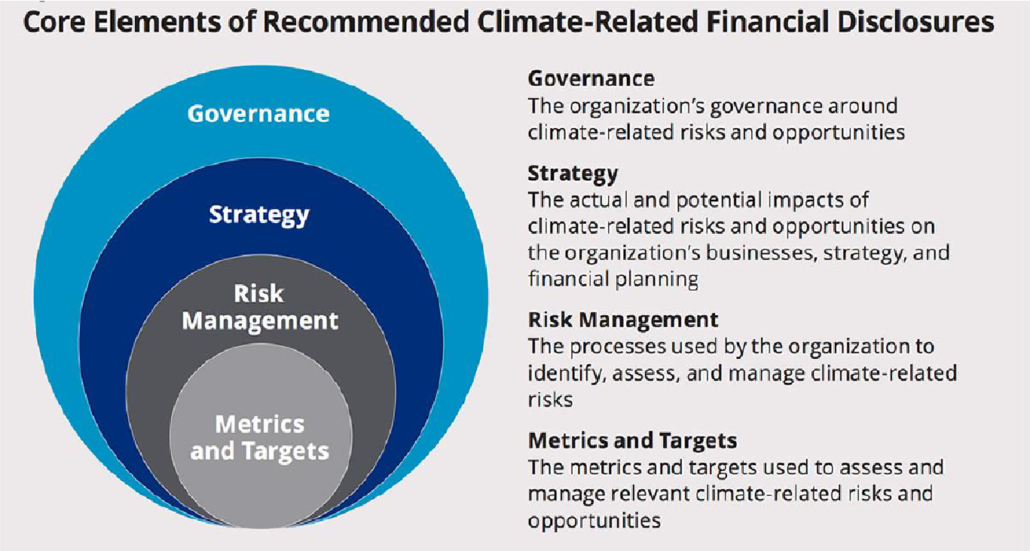 The financial impact of climatic changes may not be apparent but their implications on financial performance are far and wide.

It is important that companies ensure to include the potential impact of climate change in its major decisions. It is essential that climate-induced behaviours are embedded into the company’s culture so that climate change is considered at all levels of an organisation, which these disclosures intend to capture.

The most peculiar feature of the UK Consultation Paper is that apart from the obvious impact company operations have on the environment, it recognizes that climate change would also bring about various risks (and opportunities) on company operations too. For doing so, the Consultation Paper seeks impact of climatic responses on the company as well, thereby giving rise to dual disclosure format.

The UK Government released a roadmap aiming to mandate climate-related disclosures throughout the UK economy by 2025 in a gradual manner. The consultation paper was developed to bring the TCFD’s recommendations based climatic disclosures within the purview of the regulatory obligations by the end of 2021 to come into effect from the year 2022 onwards for large companies and LLPs such as –

However, entities in the UK, like the Bank of England, have already started implementing such disclosures as per their Annual Report for 2021, thereby setting a benchmark for reporting by other companies.

Large corporates have been targeted as it is likely that the larger the company or LLP, the greater their impact on the environment and subsequent climate risk. Further, larger corporates are also interconnected with various other companies and stakeholders. It becomes all the more important that climate risk is well understood and disclosed by them to avoid systemic risks due to climate changes.

Aim behind such climatic disclosures

The need for climatic disclosures has been motivated by the aim of transitioning to a net-zero emissions economy. Net-zero emissions refers to an overall balance between the green-house gases (GHG) emitted and absorbed so that the net effect of such emissions is ultimately zero or nil. This can be achieved by either reducing the GHG emissions or taking steps that help in absorption of such GHG emissions.

Owing to the above, the UK Government intends to ensure that companies with a material economic or environmental impact or exposure assess, disclose and ultimately take actions against climate-related risks and opportunities. This will not only induce companies to take action but also provide investors with the needed information to adequately understand and manage climate-related financial risks. The disclosures aim to achieve the following –

The idea behind the mandatory disclosures was also put forth by the Chancellor[3], ‘this new chapter means putting the full weight of private sector innovation, expertise and capital behind the critical global effort to tackle climate change and protect the environment. We’re announcing the UK’s intention to mandate climate disclosures by large companies and financial institutions across our economy, by 2025. Going further than recommended by the Taskforce on Climate-related Financial Disclosures. And the first G20 country to do so.

Climatic disclosures made by the Bank of England

The Bank of England has become the first entity in the world to publish climate disclosures in its Annual Report in June, 2020, continuing the legacy in this year as well. These disclosures may act as a guidance to other entities in the UK as well in other countries to report on TCFD’s recommendations.

Development of climatic-related disclosures – How UK takes a lead? 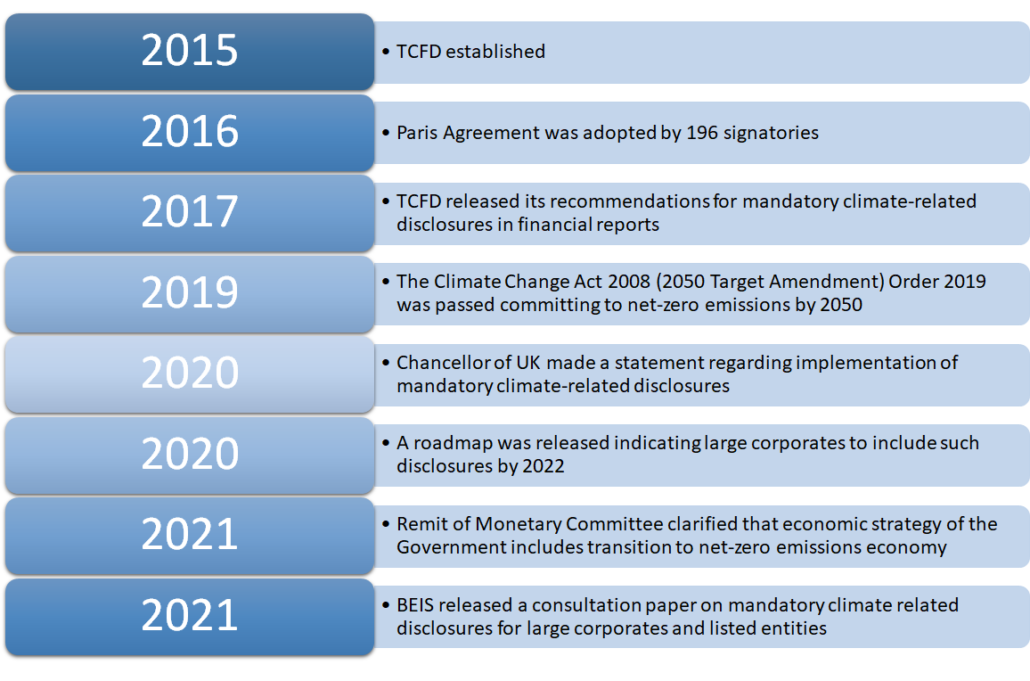 In India, the BRSR is currently the only sustainability report in force by means of regulatory provisions. The BRSR is required to be disclosed in the Annual Report of listed companies. A detailed analysis of the same can be referred to in our article.

What disclosures are covered under the BRSR with respect to climate change?

The above disclosures are mainly quantitative providing merely metrics and only cover the impact of companies on climate changes.

It has to be noted here that while BRSR requires some mandatory disclosures in relation to GHG emissions, these are only quantitative metrics. The other pillars, being governance, risk management and strategy towards climate change have not been specifically catered to under climate change. Rather these fall under the general purview where a company may conveniently skip to address some environmental issues, such as climatic change.

Though India is one of the signatories to the Paris Agreement, proposing, amongst other things, net-zero emissions as a goal, India has not shown a supportive view towards achieving net zero emissions in the country. As per a press release, India is not ruling out the possibility of achieving the net zero emissions mission, however, it does not want to extend an international commitment at the present time.

Unlike the UK, India is a developing country and GHG emissions, mainly carbon prints, are indispensable considering the continuing need for development. Moreover, the cost of countering its CHG emissions are also very high. In the given scenario, therefore, India is not in a position to commit to the cause of net-zero emissions. However, the same does not imply that India is not taking any action for reduction of emissions. The metrics required under the BRSR report serve as evidence to the same.

The above presentation clearly demonstrates that no major country in the world has made disclosures pertaining to climate risk mandatory and the situation is still the same. Most countries have, however, urged companies to disclose such information voluntarily.

Below, we have discussed the current position of climatic change reporting in some countries.

One of the signatories to the Paris Agreement, Brazil has at present no governmental emission trading schemes[6]. The Brazilian Stock Exchange (“B3”) maintains an index of shares of 100 companies (50 till 2020), called Carbon Efficient Index[7] (“ICO2”), that agree to adopt transparency practices regarding greenhouse gas (GHG) emissions. B3 follows a “report or explain” approach towards GHG emissions reporting[8] and compensates for its GHG emissions to make the effect neutral.

In Canada, the TSX (stock exchange) requires issuers to disclose certain environment information as per National Instrument 51-102 Continuous Disclosure Obligations (NI 51-102), National Instrument 58-101 Disclosure of Corporate Governance Practices (NI 58-101) and National Instrument 52-110 Audit Committees (NI 52-110). A guidance note with respect to same was released in 2010[9] followed by another in furtherance to the same in 2019[10], which refers to the TCFD’s recommendations but does not mandate the same.

The Climate Disclosure Standards Board (CDSB) of European Union did a research[11] on the climatic change related reporting by the companies of the country and found that whilst 68% of company disclosures had made some reference to TCFD, the vast majority have still only partially adopted the recommended disclosures. Much lagging was found in adoption of practices such as scenario analysis and risk time horizons. The CDSB even made recommendations to the regulator to imbibe the climate related disclosures in line with the TCFD recommendations into the Directives[12] to ensure reporting in line with the same. The Directives mainly deal with GHG emissions and decarbonisation, although specific reference to TCFD has not been made part of such Directives till date.

Recently, in October, 2020, the President of Japan committed[13] to the target of reaching net-zero emissions by 2020.  The TCFD Status Report, 2020 also presents a picture of how Japan is devoted to the cause of climatic change and is supporting the TCFD Recommendations. 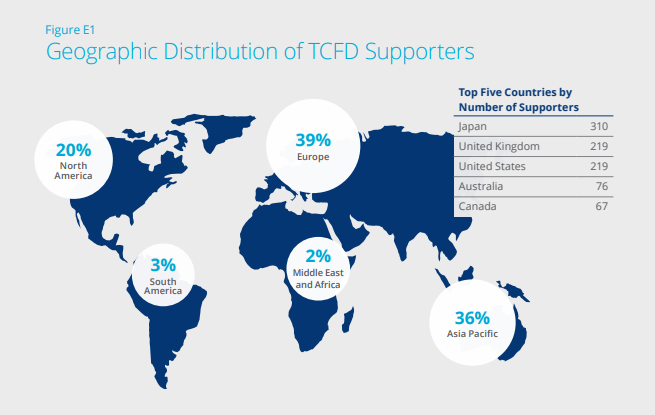 As of 2020, TCFD has the highest number of supporters from Japan. It has to be noted that while the Japanese Government has decided to put the commitment of net-zero emissions into law, till date there is no mandatory reporting requirement on the same. However, the companies take voluntary stands against climate change and give voluntary disclosures on the same.

USA, once a signatory to the Paris Agreement, had pulled out of the same under the leadership of former President Mr. Donald Trump. However, with effect from 19th February, 2021, USA has re-entered into the Paris Agreement under Joe Biden, the current President of the United States. On May 20, 2021, he signed an executive order directing federal financial regulators to take a broad range of actions to assess and respond to climate-related financial risks, including enhancing the disclosure of climate-related financial risks. Consequently, a bill has been placed to pass the Climate Risk Disclosure Act, however the same has not been passed as on date.

Making a move towards mandatory disclosures

A study of major countries in the world shows one considerable trend, gradually moving towards mandating climatic disclosures. While some companies have already taken a voluntary move towards such reporting, the reporting is mostly restricted to the present metrics and future targets, the qualitative parts remain untouched. With the regulators mandating such disclosures as part of a legal framework, the companies will be left with no alternative other than reporting. This will help in identifying the gaps, risks and opportunities, and stimulate working in a strategic way to reduce impact of climatic changes. While disclosure by companies is essential to ensure climate risk is appropriately measured, it is also important that companies move towards recognizing climate change as an important risk and opportunity to their organization.

Read our other articles on related topics –