In 2019, pursuant to the amendments proposed by the Finance Act, 2019, it was proposed to shift the regulations of Housing Finance Companies (HFCs) from National Housing Bank (NH) to the Reserve Bank of India (RBI). Further, the RBI had in its press release[1] stated that HFCs will be treated as one of the categories of Non-Banking Financial Companies (NBFCs) for regulatory purposes with effect from August 09, 2019. It was expected that the RBI shall carry out a review of the extant regulatory framework applicable to HFCs and come out with revised regulations in due course, and till such time HFCs shall continue to comply with the directions and instructions issued by NHB.

In this regard, the RBI has undertaken a review and has identified a few changes which are proposed to be prescribed for HFCs[2]. While certain guidelines in the NBFC Master Directions is proposed to be made straight away applicable to HFCs, in some other cases, changes have been proposed to ensure a seamless shift in the regulations. Most of these regulations are not new to the world at large, banks and NBFCs are already complying with the guidelines issued by the RBI on similar lines. The scope has now been extended to include HFCs under its ambit.

Defining the phrase ‘providing finance for housing’ or ‘housing finance’

The NHB Directions defined the term “housing finance company” [section 2(d)] as a company incorporated under the Companies Act, 1956 which primarily transacts or has as one of its principal objects, the transacting of the business of providing finance for housing, whether directly or indirectly. However, the term ‘providing finance for housing’ or ‘housing finance’ was not formally defined. It has been proposed to define the said terms to mean financing, for purchase/ construction/ reconstruction/ renovation/ repairs of residential dwelling units. Further, an illustrative list has been provided to determine the loans that would fall under the category of housing finance.

There was a NHB Circular dated September 26, 2011[3] which provided an illustrative list of loans which can be classified as housing/ non housing loans. The comparative table showing the difference is provided herein below:

The proposed list is similar to the illustrative list prescribed by NHB earlier. However, the list prescribed as ‘qualifying asset’ for HFCs seems to focus more on individual borrowers. It has also excluded the following-

An entity which falls short of such qualifying assets below 50% cannot be regarded as HFC. This provision is also expected to minimise the practice of giving mortgage loans (LAP-type loans) by HFCs, which would often be granted to meet working capital requirements, etc. of other entities and not for housing purposes; thereby restricting the portfolio deviations of the HFC. The specific definition of housing finance would avoid confusion and ensure better governance as well as reporting for HFCs.

The amendment to section 29 A of the NHB Act vide Finance Act, 2019 provided as follows:

(a) obtaining a certificate of registration issued under this Chapter; and

(b) having the net owned fund of ten crore rupees or such other higher amount, as the Reserve Bank may, by notification, specify.

Prior to the amendment in Finance Act, the term ‘principal business’ was not referred in NHB Act. Further, for the purposes of registration, NHB was recognizing companies as HFCs if such company had, as one of its principal objects, transacting of the business of providing finance for housing (directly or indirectly).  With the aforesaid amendment to NHB Act, there was a need to define the term ‘principal business’ for HFCs. The principal business criteria for NBFCs is well known- an NBFC must have financial assets more than 50% of its total assets and income from financial assets must be more than 50% of the gross income. The same has been proposed to be extended to HFCs as well along with the concept ‘qualifying assets’ which would mean asset qualifying as ‘housing finance’ or ‘providing finance for housing’

The principality test for HFCs has been proposed as follows (both these tests are required to be satisfied as the determinant factor for principal business):

The RBI has also proposed the following timeline for achieving the aforesaid principality:

The concept of ‘qualifying asset’ is similar to that in case of NBFC-MFIs wherein they are specifically focused on micro lending. Though in spirit the HFCs would primarily focus on housing loans only however, the HFCs offering home loans along with other related products would now be required to maintain the principality of individual housing loans. Further, the requirement of minimum concentration towards ‘individuals’ is a new concept and possibly to protect the HFCs from systemic exposures. Though the guidelines do not intend to prohibit the HFCs from providing non-housing loans, however, it limits the same. The remaining 50% can be extended in the form of non-housing loans, including LAP. An HFC which falls short of such qualifying asset criteria has to get registration as NBFC-ICC and consequentially, all laws applicable to such NBFC-ICC shall apply to the HFC.

Classifying HFCs into SIs and NSIs

The existing regulations for HFCs are similar to NBFCs. The intention is to bring the non-systemically important HFCs at par with NBFC-NSI and hence, the applicability of the existing Master Directions for NBFC-ND-NSI can be extended to HFC-non-SI as well.

It is proposed to increase the minimum NOF for HFCs from the current requirement of ₹10 crore to ₹20 crore. For existing HFCs the glide path would be to reach ₹15 crore within 1 year and ₹20 crore within 2 years.

The increased capital requirement is to strengthen the capital base of the HFCs. However, as compared to an NBFC the NOF requirement is very high. The registration requirement for both NBFC-ICC and HFC will also be the same, since both will have to apply to the RBI.

An important question that will arise here is that why should an entity register as an HFC- given the fact that even an NBFC-ICC can extend housing loan, one would have to consider the various factors to carry on housing finance as a principle activity under an HFC or non-principal activity under an NBFC-ICC. As per the provisions of section 29A and 2(d) of the NHB Act (mentioned earlier) read along with the RBI guidelines issued in this regard, an HFC will have to satisfy the principality of 50% housing loans as well as 75% loans to individuals. 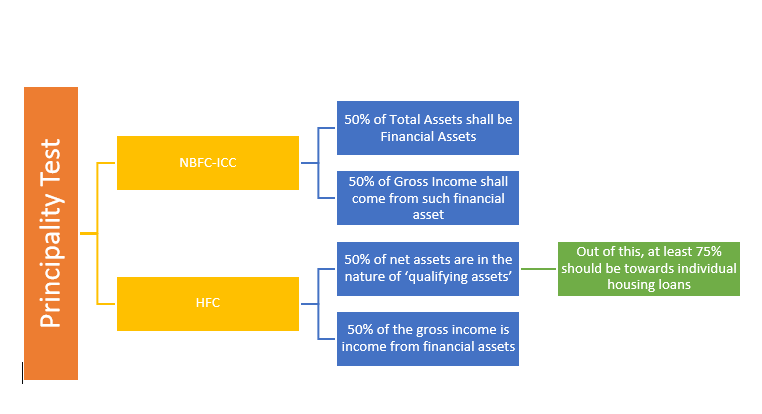 In order to address concerns on double financing due to lending to construction companies in the group and also to individuals purchasing flats from the latter, it is proposed to provide the option to the concerned HFC to choose to lend only at one level. The proposition is that HFC can either undertake an exposure on the group company in real estate business or lend to retail individual home buyers in the projects of group entities, but not do both. The language of the notification is not very clear that it is referring to internal group or external group as well, however, it seems that the restriction should not be just for internal group but also for external group.

In case the HFC decides to take any exposure in its group entities (lending and investment) directly or indirectly, such exposure cannot be more than

The aforesaid limit on ‘Group Exposure’ seems to include both housing and non-housing loans to such group entity. Also, the limits are more stringent than the existing concentration norms, which provide the limit for lending and investment of upto 25% of the owned fund to a single party and 40% of its owned fund to a single group of parties. There is an exemption in the existing concentration norms for investment and lending to group companies to the extent it has been reduced from the owned funds. Hence, the limit of 15% and 25% may not be relevant if the HFC has already knocked off the exposure from its owned funds. This must be clarified by the RBI.

Since, the intent is to stop double finance that is to say ongoing exposure should not be there on both- in case funding has been extended to the builder then already the flat is funded, however, after construction once the loan is repaid by the builder, the individual may be given loan for the flat- this should not be regarded as double financing.

As regards to extending loans to individual, it is required that the HFC must satisfy the arms’ length requirement for retail loans to group’s customers. However, this mutual exclusion clause does not seems to apply to companies outside group and their retail customers – but in case the intent is to bar double financing, the external group companies must also be included.

In case of NBFCs, no foreclosure charges/pre-payment penalties is levied on any floating rate term loan sanctioned for purposes other than business to individual borrowers with or without co-obligors.

In case of HFCs, the foreclosure penalty is waived off in case of housing loans depending on the category of borrower and the source of funds for prepayment. The probable scenarios are provided herein below:

*Fixed rate loan is one where the rate is fixed for the entire tenure of the loan.

**The expression “own sources” for the purpose means any source other than by borrowing from a bank/HFC/NBFC and/or a financial institution.

There are no regulations prescribed for HFCs for not levying the foreclosure charge for non-housing loans such as in case of term loans availed for other than business purpose. Hence, it is proposed to extend these instructions to HFCs as well. This would ensure uniformity with regard to repayment of various term loans by borrowers. Though the language is not very clear and hence, it seems that the foreclosure charges shall be waived off for all floating rate term loans to individual borrowers, including housing loans as well.

Other provisions to be made applicable to HFCs

Further, since HFCs are treated as a category of NBFCs for regulatory purposes, investments in shares of other HFCs and also in other NBFCs (whether forming part of group or not), shall be reduced from the Tier I capital to the extent it exceeds, in aggregate along with other exposures to group companies, ten per cent of the owned fund of HFC.

There are certain major differences between extant regulations of the HFCs and that for NBFCs. It is being proposed to harmonise these regulations in a phased manner over a period of two to three years:

The minimum CRAR prescribed for HFCs currently is 12% and which was to be progressively increased to 14% by March 31, 2021 and to 15% by March 31, 2022. Further, the risk Review of extant regulatory framework for Housing Finance companies (HFCs) weights for assets of HFCs are in the range of 30% to 125% based on asset classification, LTV, type of borrower, etc. However, for NBFCs, the minimum CRAR is 15% and risk weights are broadly under 0%, 20% and 100% categories.

The major differences in provisioning norms applicable to standard, substandard and doubtful assets in HFCs’ books. In case of standard loans, the HFCs are required to create a provision ranging from 0.4% to 2% and for substandard the requirement is 15%, whereas, in case of NBFC-ND-SI, the provision is 0.4% for standard and 10% for sub-standard.

The credit concentration norms for NBFCs and HFCs are similar. NBFCs enjoy certain exceptions in this regard which was also introduced for HFCs in 2018.

Though HFCs are now another form of NBFCs, the RBI draft proposes to carve out a slightly separate set of rules for the HFCs in certain cases. Further, the proposed harmonisation of regulations will be done over a period of two years and till such time the HFCs will follow the extant NHB norms. Thus enabling the HFCs a breather period and to ensure seamless transition.

[4] Our snapshot on the same can be read here- https://vinodkothari.com/wp-content/uploads/2019/11/Liquidity-risk-framework.pdf

A point by point comparative of the existing in proposed guidelines may be viewed here: