Blog - Latest News
You are here: Home / Insolvency and Bankruptcy / Ablution by Resolution

The Insolvency and Bankruptcy Code (Second Amendment) Bill, 2019 seeks to wash out liability of corporate debtors resolved under IBC

The Insolvency and Bankruptcy Code (Second Amendment) Bill, 2019 (‘Bill’) seeks to give effect to the same by way of insertion of section 32A in the Code. Seemingly vast and expansive in terms of drafting, the section broadly operates on 3 fronts, of course, subject to conditions – 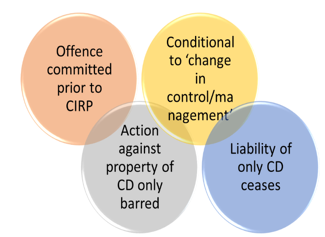 (i) cessation of liability of the corporate debtor in respect of an offence committee prior to the commencement of corporate insolvency resolution process,

(ii) prohibition on any action against any property of the corporate debtor covered under the resolution plan,

(iii) requirement from the corporate debtor and other persons to extend assistance and co-operation to any investigating authority, notwithstanding the immunity granted as above.

At the outset, it is important to note that while releasing the liability against ‘offences’, the section does not define the scope of the word ‘offence’ – hence, the same will have to interpreted broadly so as to cover any offence which the corporate debtor might have committed under any law including but not limited to corporate laws, tax laws, labour laws, environmental laws, and commercial laws. The view finds support in opening non-obstante phrase of section 32A(1). Here, it is equally important to draw a line between offences committed by the corporate vehicle and offences committed by those running the corporate vehicle, as we discuss ahead.

Each of the three aspects are discussed threadbare as follows –

Sub-section (1) of section 32A is a non-obstante provision operating against anything contrary contained in the Code or any other law for the time being in force. The provisions can be summarized in the points –(i) The sub-section grants immunity to the corporate debtor from any liability in respect of an offence committed prior to the commencement of CIRP.

(iii) The benefit under this sub-section is conditional – the same is available only when the resolution plan has resulted into a change in management/control of the corporate debtor, such that a person who was a promoter or who was the person in management or control or who was a related party of such persons are no more in the management/control of the corporate debtor post approval of resolution plan.

(iv) Further, the person in management/control (post resolution) should not be the one with respect to whom any investigating authority has given adverse opinion vis-à-vis the offence committed, and has furnished a report/compliant to relevant statutory authority/court. Notably, the person might not be a direct accused, but the one who has been alleged to have abetted or conspired for the commission of offence (the persons, collectively with persons mentioned in (iii) above called debarred persons hereinafter). 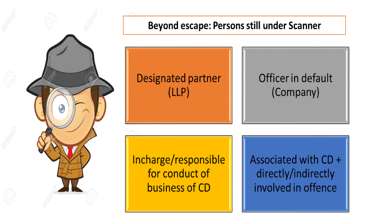 a. designated partner (in case of LLP) or

b. an officer in default (in case of a company), or

c. every person who was, in any manner, incharge of, or responsible to the corporate debtor for the conduct of its business, or

d. every person associated with the corporate debtor in any manner and who was directly/indirectly involved in the commission of the offence as per report of the investigation authority.

Prohibition on action against property

The sub-section makes the following provisions –

(i) The protection is again with respect to an offence committed prior to CIRP.

(ii) The property, against which action is proposed to be taken, is covered under the resolution plan approved by the AA or sale under liquidation.

(iv) The action is not barred against property of other persons (for instance, say officers in default, guarantors, etc.)

As regards sub-section (2), the following points may be noted –

Assistance and co-operation in investigation

Notwithstanding the immunity given in sub-sections (1) & (2), the corporate debtor or any person who may be required to extent assistance/co-operation to any authority investigating an offence committed prior to the commencement of CIRP, has been mandated to assist and co-operate accordingly.

Insolvency and Bankruptcy Code (Second Amendment) Bill, 2019 Quick review of Proposed Amendments
Minority shareholders under IBC
COVID- 19 AND DEBENTURE RESTRUCTURING
Revising minimum public holding requirements for large issuers and companies under CIRP
Financial Service Provider under the clutch of IBC? Nature of the “debt” vs. Nature of the “debtor”
Recent Developments in Corporate Laws
Law of Assignment of Receivables
MCA need not be mandatorily impleaded in applications: NCLAT sets-aside directions issued by of Principal Bench
0 replies