The banking sector is one of the pillars for economic development of any country, and any well balanced and healthy economy is largely dependent on a transparent and credible banking system. In recent years, the Indian economy has recognized the importance of a well-regulated and fundamentally strong banking framework and made it one of its priorities to clear out the vast amount of unhealthy practices and activities that tread on the fine line of regulation. A slew of new policies which led to clearer recognition norms, stricter disclosure requirements, more hands-on approach by the Reserve Bank of India (RBI) and an overall environment that is much more transparent than before are all testimony to the fact that the banking institutions are in for a major overhaul. The introduction of practices such as Asset Quality Review (AQR), restructuring norms and the introduction of Insolvency and Bankruptcy Code (IBC) by the RBI were steps aimed towards a fundamentally cleaner banking system.

On 18th April, 2016 RBI released a circular directing banks to disclose any divergence in case there is a 15% difference in the assessment of bad loans between the RBI and the bank’s financial statements.[1] The circular requires disclosures by banks in a prescribed format in certain cases of divergence in the asset classification and provisioning. Further, it requires the disclosures to be made in the Notes to Accounts (NTA) in the ensuing annual financial statements published immediately following communication of such divergence by RBI to the bank. As pert the circular, the first such disclosure with respect to the divergences observed by RBI for the financial year 2015-16 shall be made in the NTA of financial statements for the year ended March 31, 2017.

The Securities Exchange Board of India (SEBI) also followed RBI’s footsteps and directed listed banks to do the same and disclose any divergence exceeding 15% in the provisioning and asset classification.[2] As per the SEBI circular, listed banks are required to comply with the following:

There was a need for the introduction of such a norm since RBI noticed that its estimates and the actual information released by banks to the public were materially different and did not actually reflect a true and fair view of the banks’ operations. Practices such as ever-greening of stressed loans, round-tripping of funds among banks and incompetent overdraft facilities were some common malpractices committed by banks that did not violate the regulations in paper, but did violate them in spirit, allowing the banks to hide behind the numbers and deter the public from scrutinizing its operations.

This disclosure requirement by the RBI has also allowed SEBI to restrict listed banks from finding loopholes in the law and play a numbers game that benefitted the senior figures in banks by keeping the stock price green during trading sessions. Since the implementation of this new disclosure requirement, banks such as YES Bank, Axis Bank, RBL Bank, to name a few, have come under excess scrutiny of the public as it has been found that there is astronomical difference between theirs and RBI’s results. YES Bank’s divergence ratio is the highest among banks that have reported divergences. The financial results for 2016-17 of some of the listed banks highlighted the following: 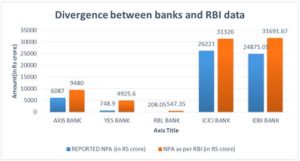 The stock of the following banks tanked badly in the stock market upon disclosure of such reports; and consequently SEBI asked the banks to explain the reason for such gross under-reporting of data. SEBI is also examining the quality of audit taken place during the financial year and making sure that it conforms to applicable RBI standards.[1] The above mentioned banks released statements ensuring investors that this divergence is not a cause for concern as it adheres to RBI’s guidelines and is in conformity with Institute of Chartered Accountants of India (ICAI) regulations. They also justified these results by stating that the divergence was two years ago and has been taken care of now. This has led to confusion because the ICAI itself is seeking a clarification from RBI regarding its reporting policies.

The banks cannot be totally blamed for such a staggering difference until RBI makes available a detailed disclosure of reason for such divergence. If actions such as ever-greening are found in high volumes, it would signal wilful intention to mask bad performance and the investors will have a right to raise its voice against the corporate governance of the banks. India Ratings states that as per its estimates, banks have been sitting on unrecognised stressed loans worth Rs 7.7 lakh crore including both corporates and SME debt – which holds 22% of total bank credit.[2] So far, the effectiveness of this new policy is yet to be observed as a lot of minute details are yet to be ironed out and investors have been advised to wait before making any investment decision until the requisite data is made available to the public. Given the past history of notifications, RBI may also consider introduction of similar reforms for Non-banking Financial Companies (NBFCs) given the fact that their operations are increasing at a rapid rate in the country. This policy is no doubt a step in the right direction and will help present a more prudent and clearer view of the banking sector.

Standard Procedure for Valuation to be followed by HFCs. SEBI aborts brightening of fine lines of control
Scroll to top