Blog - Latest News
You are here: Home / Proposed changes under the LLP Act are much more than decriminalisatio...

By Pammy Jaiswal and Megha Saraf

A Limited Liability Partnership (LLP) being a hybrid form of an entity has always been seen with lesser regulatory burden as compared to a company and is regulated by the Limited Liability Partnership Act, 2008 (LLP Act). Having said that, it is imperative to note that currently there are various provisions under the LLP Act that provide for levying penalty, fine and also imprisonment. The offences have been bifurcated into compoundable and non-compoundable offences as in the case of companies under the Companies Act, 2013 (CA, 2013/Act).

Further, the fact that an LLP in the course of its business can undertake debt obligations cannot be argued, however, the mode of undertaking debt obligations in the case of instruments has not been dealt with under the Act.

Continuing with the policy and intent of the Government of India to decriminalise minor and procedural non-compliances, the Ministry of Corporate Affairs (MCA) has constituted a Company Law Committee (CLC/Committee) on 18th September, 2019 with a view to revamp the LLP Act, 2008 (LLP Act) and bring necessary amendments in line with the economic scenario. The Committee was chaired by Mr. Rajesh Verma and had eminent personalities from regulatory bodies like SEBI etc.

While the main agenda for the constitution of the CLC was decriminalisation, however, when we look at the Report[1] which has been presented on 18th January, 2021 and is open for public comments till 2nd February, 2021, it is seen that it is much more than just decriminalisation.

Highlights of the Report

The proposed reforms go wide enough to confining the business of LLPs to non-financial business, creating a structure for issuance of non-convertible debentures by LLPs, having a separate classification called small LLPs with lower filing or additional fees, extending accounting standards for LLPs and decriminalisation of offences. 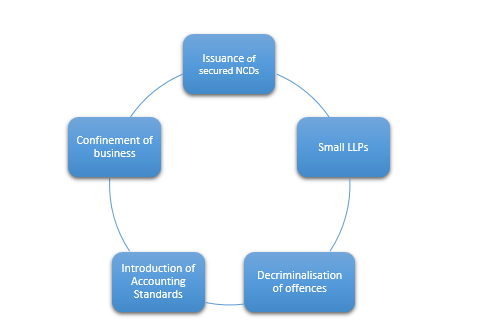 We shall now critically discuss the proposed reforms in detail.

Raising of funds through issuance of secured Non-Convertible Debentures (NCDs)

Debentures are one of the widely used instruments for raising funds. It is not only a structured mode of raising funds as it is in form of a security but also more flexible as compared to loans. As per the Act, a company can raise borrowed funds both by way of loan or issuance of debentures. However, the LLP Act has always been silent on the same.

Having said that, it is observed that the Report recommends issuance of secured NCDs only to bodies corporate and trusts which are regulated by SEBI or RBI with certain fetters as given below:

The Limited Liability Partnerships (Application of Companies Act 2006) Regulations, 2009[2] specifically lays down the provisions for issuance of debentures. The provisions broadly say the following:

FAQs on LLPs by United Kingdom[3]

Hence, the LLP Act of United Kingdom provides for issuance of Debentures by an LLP.

As per para 11 of the Fourth Schedule of the Singapore LLP Act, 2005[4], “Where a receiver is appointed on behalf of the holders of any debentures of a limited liability partnership secured by a floating charge or possession is taken by or on behalf of debenture holders of any property comprised in or subject to a floating charge, then, if the limited liability partnership is not at the time in the course of being wound up, debts which in every winding up are preferential debts and are due by way of wages, salary, retrenchment benefit or ex gratia payment, vacation leave or superannuation or provident fund payments and any amount which in a winding up is payable in pursuance of paragraph 76(6) or (8) of the Fifth Schedule shall be paid out of any assets coming to the hands of the receiver or other person taking possession in priority to any claim for principal or interest in respect of the debentures and shall be paid in the same order of priority as is prescribed by that paragraph in respect of those debts and amounts.”

This implies that the Singapore LLP Act also allows raising of funds by way of debentures.

The Ministry of Law and Justice has laid a comprehensive mechanism to ban any unregulated deposit schemes by introducing Banning of Unregulated Deposit Schemes Act 2019 (BUDS Act). Section 2(4)(e) of the said Act stated that where a capital contribution is received by an LLP, the same is an exempt deposit.

Further, the introductory paragraph as well as Section 41 of the BUDS Act states that the said Act shall not apply to deposits taken in the ‘ordinary course of business’. While ‘ordinary course of business’ has not been defined, however, the same should be construed as  funding raised in order to carry out business operations for which the LLP has been formed since every business requires funding to operate.

In the said case, the LLP intended to raise funds through listed NCDs under the SEBI (Issue and Listing of Debt Securities) Regulations, 2008 (ILDS Regulations) and list them in the wholesale debt market. While the definition of ‘debt securities’ as per ILDS Regulations covered such securities issued by an LLP by virtue of it being a body corporate, however, the definition of ‘Issuer’ specifically covered company, public sector undertaking or any statutory corporation.

While the said informal guidance discussed on the issue of listed NCDs, it nowhere discussed or stated regarding any restriction in the LLP Act to issue NCDs.

The Report states that an LLP Act can contract debt, however, the LLP Act along with the allied Rules do not permit the LLPs to raise funds. While the Report talks about the restriction on issuance of NCDs, however, it is significant to note that the LLP Act and the rules are silent on the same. Accordingly, in the absence of any express restriction for the said matter, construing that the same tantamount to a restriction is not correct in our view.

The Report also focuses on the fact that it is important to boost the debt market in India and allow LLPs to raise funds by issuance of NCDs. Further, in order to protect investors’ interests and to prevent any fraudulent misuse of funds, such issuance will be allowed to be made only to SEBI or RBI regulated entities thereby prohibiting any issuance to retail investors. While this is a welcome move to insert an express provisions for enabling and at the same time regulating the issuance of NCDs by an LLP, however, the following things should also be considered at the time of bringing the final changes in the law:

The CA, 2013 provides for the concept of small companies. Such small companies enjoy several privileges under the CA, 2013 such as reduced no. of board meetings, preparation of concise board’s report, lesser penalties, concise financial statements etc. The rationale behind such relaxations/ privileges is to promote ease of operations by small companies or MSMEs.

With similar intent, the CLC Report has proposed the introduction of small LLPs. Such a provision will facilitate lesser compliances, lesser fee or additional fees for small LLPs.

The proposed definition of small LLPs will be based on contribution and turnover not exceeding 25 lacs or 40 lacs respectively, or such higher amount as may be prescribed. Such small LLPs will be able to enjoy several privileges such as:

The same will reduce cost of compliances and will facilitate business by MSMEs/ small LLPs.

Considering the same, the Report has proposed insertion of a new proviso wherein the definition of ‘business’ comes with a proviso. This proviso gives the power to the Central Government to include or exclude any business activities by way of a Notification.

Express restriction proposed for merger of LLPs with a company

The CLC Report has also placed a proposal to restrict any amalgamation of an LLP with a company by amending Section 62 of the LLP Act.

The CLC has recommended various offences to be decriminalized and to be shifted to the In-house Adjudication Mechanism. Similar to the CA, 2013, where several provisions have been decriminalized both either by amending the CA, 2013 or by Companies (Amendment) Act, 2020. The motive behind the same is to de-clog the courts or the NCLTs thereby reducing their burden from non-serious matters. A list of the offences decriminalized are as follows:

In order to ease out and de-clog the Courts, various offences have been proposed to be decriminalized and brought under the In-house Adjudication Mechanism (IAM), similar to the CA, 2013. The CLC Report has introduced Section 77A in the LLP Act thereby enabling the Central Government to appoint officers for adjudging penalty under the provisions of the LLP Act.

As per the extant provisions in the law, in absence of any specific provision, LLPs are required to comply with the Generally Accepted Accounting Principles (GAAP). It has been discussed that it is important to make accounting standards applicable on certain class of LLPs particularly LLPs engaged in manufacturing activities. Further, it is also proposed to lay down standards for auditing to certain classes of LLPs. Accordingly, it has been recommended to insert new sections 34A and 34AA in the LLP Act in respect of the same.

Alignment with the provisions of CA, 2013

Introduction of a new Section 68A- Registration Offices

With the plethora of changes proposed, it seems that the LLP Act is set to be amended significantly. While the title of the Report suggested that decriminalisation is the main agenda, however, after looking into the same, we understand that the proposed changes are deep and wide.

Some of the proposed changes related to the issuance of NCDs and restriction on amalgamation with a company will surely attract market reaction. Since the Report is currently open for public comments, it will be interesting to see the final set of changes proposed.

Our other related material:

To read our Articles on corporate laws, click here

To read our Articles on other matters, click here