Last year, the European Covered Bonds Council celebrated 250th anniversary of covered bonds[1]. That year also marked a substantial increase in global volumes of covered bonds issuance, which had been flat for the past few years. However, no one, joining the 250 years’ celebration, would have the COVID disruption in mind

With a history of more than 250 years now, covered bonds would have withstood various calamities and disruptions, both economic and natural, over the years. Covered bonds have not seen defaults over all these years. Will they be able to sustain the COVID disruption as well, given the fact that the major countries where they have been used extensively, have all suffered COVID casualties or infections, in varying degrees? In addition to the challenging credit environment, covered bonds will also be put to another question – does this device of refinancing mortgages in Europe hold the answer to sustaining continuous funding of home loans, thereby mitigating the impact of the crisis?

While, over the years, the instrument has been talked about (and less practiced) in lots of jurisdictions over the world, EU countries are still the bastion for covered bonds. About 82% of the world’s Euro 2.50 trillion dollar outstanding covered bonds are issued by EU entities.

European banks have a substantial dependence on covered bonds. Germany, where covered bonds have widely been regarded as a “fixture of German banking”, account for nearly 32% of the total capital market funding. In some countries, albeit with smaller bank balance sheets, the number goes up to as high as 78 – 81% [See Graph]. 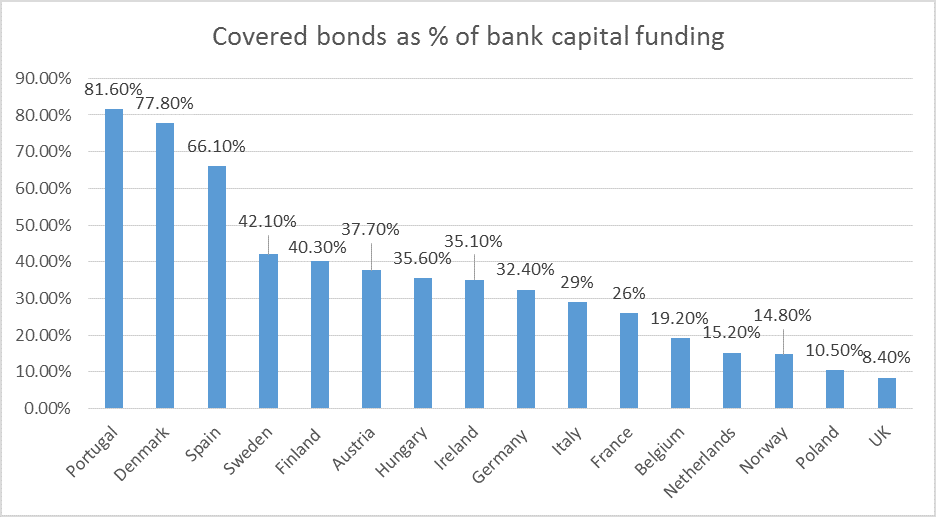 If covered bonds were to prove resilient to the crisis, the investors’ confidence in these bonds, which have so had several regulatory privileges such as lower risk weights, will stand justified. On the other hand, if the bonds were to prove as brittle as some of their issuing banks, the claim to 250 years of unblemished vintage will be put to question.

Covered bonds have a dual recourse feature – the issuer, and the underlying pool, in that order. Covered bonds are generally issued by mortgage-lending banks in Europe. Therefore, a default of covered bonds may occur only the issuing banks face the risk of default. Even if that were to happen, the extent of over-collateralisation in the cover pool may be sufficient to hold the bondholders safe. The recourse that the bondholders have against the loan pool is further strengthened by inherent support in a mortgage loan in form of the LTV ratio.

After the Global Financial Crisis and the introduction of Basel III norms, the capital of EU banks has generally strengthened. Data published by European Central Bank shows that European banks have a common equity tier 1 [CET 1] ratio of about 14.78%, as against the regulatory minimum of 4.5%. Therefore, the issuer banks seem to be poised to withstand pressure on the performance.

Past instances of default

Robustness of covered bonds is not the only factor which has kept them standing over all these years – another very important factor is sovereign support. European sovereigns have been sensitive to the important of covered bonds as crucial to maintain the flow of funds to the housing sector, and hence, they have tried to save covered bonds from defaulting.

In the period 1997 to 2019, out of covered bonds, there have been 33 instances of default by covered bond issuers, in various other on-balance sheet liabilities. However, these issues did not default on their covered bonds[2].

There are several regulatory incentives for covered bonds. Central banks permit self-issued covered bonds to be used as collateral for repo facilities. ECB also permits covered bonds as a part of its purchase program. In addition, there are preferential risk weights for capital requirements.

Rating agency Fitch also had a similar observation – stating that the rating downgrades for covered bonds were mostly related to sovereign downgrades, as in case of Greece and Italy.

Risk of downgrades in covered bonds

Risk of downgrades in covered bonds arises mainly from 2 reasons: weakening health of issuer banks, and quality of the underlying mortgage pools. Mortgage pools face the risks of reducing property prices, strain on urban incomes and increase in unemployment levels, etc. Over-collateralisation levels remain a strength, but unlike in case of MBS, covered bonds lean primarily on the health of the issuer banks. As long as the bank in question has adequate capital, the chances that it will continue to perform on covered bonds remain strong.

At the loan level, LTV ratios are also sufficiently resilient. Moody’s report suggests that in several jurisdictions, the LTV ratios for European covered bonds are less than 60%.

Additionally, in several European jurisdictions, the regulatory requirement stipulate non-performing loans either to be replaced by performing loans, or not to be considered for the purpose of collateral pool.

A covered bond rating may rise by several notches, because of a combination of factors, including issuer resolution framework, jurisdictional support, and collateral support[4]. Either because of the strength of the pool, or because of the legislation support, or because of both. However, in any case the issuer’s credit rating is already strong, say, AAA, the notching up that could potentially have come has not been used at all. This is what is referred to as “unused notches”.

In order to assess the ability of covered bonds to withstand the pressure on the issuer bank’s rating will be the extent of unused notches of rating upliftment. In a report dated 25th March, 2020[5], rating agency S&P gave data about unused notches of rating upliftment of covered bonds in several jurisdictions. These ranged between 1 to 6 in many countries, thus pointing to the ability of the covered bond issuances to withstand rating pressures.

We are at the cusp of the disruption in global economies caused by the COVID pandemic. Any assessment of the impact of the crisis on capital market instruments may verge on being speculative. However, current signals are that the 250 years of history of performance does not face the risk of a collapse.

Links to our other resources on covered bonds –

MBS and covered bonds after the crisis for APUHF conference

[1] 29th August, 1769, Frederick the Great of Prussia signed an order permitting the issuance of a landowners’ cooperative.  It was in 1770 that the first German pfandbrief was issued. Going by this, the 250th anniversary should actually be this year.

Buy-back of shares during Covid-19 Pandemic
IMPACT OF COVID-19 ON FINANCIAL CONTRACTS
Convening of AGM during COVID-19 crisis
Leasing: The way forward in the post COVID-19 world
SEBI extends deadline for June quarter results amid COVID-19
Would the doses of TLTRO really nurse the financial sector?
Modes of Restructuring of Stressed Accounts
ECLGS 2.0- Another push for businesses
0 replies

Transacting by exception: Listed cos in India give substantive carve outs for... RBI proposes to strengthen governance in Banks
Scroll to top