Here, let us first identify the various possibilities with respect to clauses in Articles and provisions of law in the same subject matter. 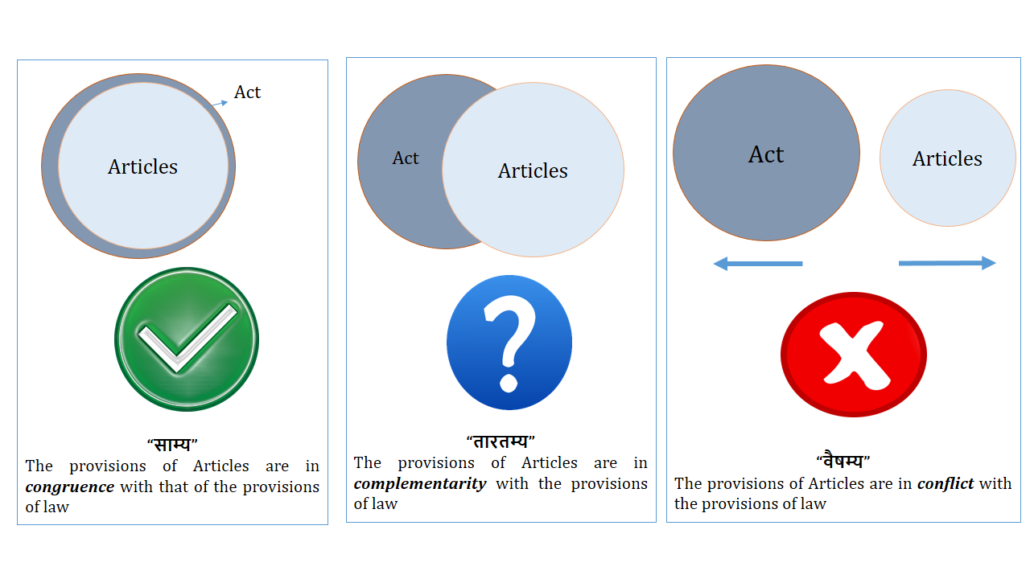 In this write-up, the author tries to analyse and bring answers to the same, on the basis of available judicial precedents.

Authority to the Articles

Section 5 of the Act provides that “the articles of a company shall contain the regulations for management of the company.”

To limit the powers of Articles, Section 6(b) provides that “any provision contained in the memorandum, articles, agreement or resolution shall, to the extent to which it is repugnant to the provisions of this Act, become or be void, as the case may be.”

In another matter not necessarily dealing with the authority of articles [refer Dale & Carrington Invt. (p) Ltd v. P K Prathapan, 2005(1) SCC 212] in the appeal placed before the Hon’ble court, had referred to certain clauses of articles not referred to by lower Courts in view of the fact that the Articles of a company are its constituent document and are binding on the company and its directors.

There have been many references where the binding nature of the articles have been reiterated and established that provisions contained in the articles of a company are generally binding. Here, we present an analysis of some case rulings and judicial pronouncements to help us get into a conclusion as to whether there can be situations where the articles can be disregarded on the argument of the same being inconsistent with law.

This would include rulings from jurisdictions where corporate laws are structurally similar to that in India and therefore, may be of relevance for the purpose of taking references. For example, Section 18 of the Companies Act, 2006 [UK] also gives similar authority to the Articles of the companies incorporated there.

In the matter of Staray Capital Limited vs Cha, Yang , one of the questions that fell for consideration before a bench of Lords of the Privy Council of UK, was an amendment in articles of the Company, requiring a particular acquisition to be redeemed by way of fair valuation, valid?

The judge recorded his observations as – “it seems to me that it is not possible for me to say that a company in general meeting cannot reasonably take the view that shareholders who have acquired their holdings as a result of misstatements, whether fraudulent or negligent, or who have committed acts which may result in the company incurring or suffering disadvantage or negative publicity, should have their shares redeemed at a valuation. By itself the amendment is not so oppressive or extravagant as to cast doubts upon the bona fides of Mr Chen in professing the view that it was in the best interests of Staray that Mr Cha should cease to be associated with it. The charge of malice falls away accordingly.”

2.      Limitations of a company with regard to amendment of its articles

An amendment in articles of a company passed with requisite majority approval is generally valid unless it is prejudicial to the interests of the company or its member(s). Here, in the matter of Charterhouse Capital Ltd [2015] EWCA Civ 536; [2015] 2 BCLC 627, the Royal Courts of Justice had made an attempt to enlist the principles that can limit the company from acting as per the provisions of the articles of the company.  The ruling also takes into consideration various previous pronouncements of courts to derive the extent upto which the articles of a company may be rendered valid.

1.     Question of repugnancy arises when reconciliation is not possible

In the matter of Madanlal Fakirchand Dudhediya vs Shree Changdeo Sugar Mills Ltd, 1962 AIR 1543, the question mainly revolved around payment of commission in excess of the limits as provided in the Act. The matter mostly dealt with the conflicting interpretation of two sections of the same Act, where the issue of repugnancy has also been dealt with. The Supreme Court observed – The two sub-sections must be read as parts of an integral whole and as being inter- dependent; an attempt should be made in construing them to reconcile them if it is reasonably possible to do so, and to avoid repugnancy. If repugnancy cannot possibly be avoided, then a question may arise as to which of the two should prevail. But that question can arise only if repugnancy cannot be avoided.” In the said matter, an alternative interpretation of the said sub-sections avoided repugnance, and hence, such an interpretation was taken.

2.     Validity of articles beyond the provisions of law

In the matter of General Commerce Ltd. And Anr. vs Apparel Export Promotion Council, 1990 69 CompCas 159 Delhi, the matter of whether or not some specific clauses in the Articles of the company beyond the provisions of the Act are rendered contrary and hence invalid, has been adjudged on the basis of the principle enunciated in Nazir Ahmed v. King Emperor, Air 1936 Privy Council 253(2). The principle laid down by the Privy Council is as follows –

“where a power is given by a statute to do a certain thing in a certain way, the thing must be done in that way or not at all. Other methods of performance are necessarily forbidden.”

3.     Articles providing a power to Board whose mode of operation has been prescribed by the Act

In the matter of Sri Kishan Rathi vs Mondal Bros. And Co. (P) Ltd., AIR 1967 Cal 75, the question was whether the Articles of the company, which provides the board of directors with powers to borrow money, was repugnant to the provisions of the Act since the Act requires the powers to be exercised by way of a resolution in the board meeting. The High Court held that the same is not repugnant since –

“The Articles deal only with the Director’s powers to borrow on a promissory note or a Hundi. They do not enjoin any particular procedure to exercise that power to borrow.

If the Articles had stated that the Board of Directors could exercise that power to borrow money without a resolution at a meeting of the Board, then of course, that provision would have been repugnant to this section.”

4.     True repugnancy can exist beyond direct conflict but can be avoided by taking a stricter interpretation

The Calcutta High Court in the matter of G.P. Stewart v. B.K. Roy Chaudhury [AIR 1939 Cal 628] provided the meaning of ‘repugnancy’ as follows –

“ It is sometimes said that two laws cannot be said to be properly repugnant  unless there is a direct conflict between them, as when one says “do” and the other “don’t”, there is no true repugnancy, according to this view, if it is possible to obey both the laws. For reasons which we shall set forth presently, we think that this is too narrow a test: there may well be cases of repugnancy where both laws say “don’t” but in different ways.”

5.     Repugnancy – not the only criterion to render something invalid

“Repugnancy arises when two enactments both within the competence of the two Legislatures collide and when the Constitution expressly or by necessary implication provides that the enactment of one Legislature has superiority over the other then to the  extent of the repugnancy the one supersedes the other. But two enactments may be repugnant to each other even though obedience to each of them is possible without disobeying the other. The test of two legislations containing contradictory provisions is not, however, the only criterion of repugnancy, for if a competent legislature with a superior efficacy expressly or impliedly evinces by its legislation an intention to cover the whole field, the enactments of the other legislature whether passed before or after would be overborne on the ground of repugnance. Where such is the position, the inconsistency is demonstrated not by a detailed comparison of provisions of the two statutes but by the mere existence of the two pieces of legislation”

6.      Principle of necessary implication to be applied while dealing with repugnancy

In the matter of Cricket Club Of India Ltd. And Ors. vs Madhav L. Apte And Ors. , 1975 45 CompCas 574 Bom, the Bombay High Court has observed that while dealing with the matters of repugnancy, one should not only look at the express provisions but also apply the principle of necessary implication.

7.     Articles of a company may prescribe stricter compliances than the Act

The High Court in the matter of Amruta Kaur Puri vs. Kapurthala Flour Oil and General Mills Company Pvt Ltd. and Others (1982) SCC Online ERH 518 has provided that where the articles provide a higher quorum, the same has to be adhered to. The Hon’ble justice has provided his statement as follows –

“No doubt, it is true that the Act has provided a quorum of one-third of the total strength of the directors or two directors, whichever is higher, but it does not forbid the company to fix a higher number of directors to form a quorum. It provides the minimum number of directors. That means that the company in its articles cannot provide a quorum of lesser number of directors than what is provided in Sub-section. (2) of Section 287. However, it can provide a quorum of directors on the higher side. According to Section 9(b), the provisions contained in the articles are void if these are repugnant to the provisions of the Act. In my view, there is no repugnancy between the provisions of Article 98 and Section 287. Therefore, the minimum quorum for the meeting of the directors is four. However, there were three directors present when resolution No. 4, reproduced above, was passed and, therefore, it is illegal.”

The above analysis makes it clear that the authority of the articles cannot be denied by the company or its members and other stakeholders unless the same is either beyond the scope of powers granted to it or is grossly prejudicial to the interests of the company and other shareholders and the public at large. Articles cannot be rendered invalid and disregarded merely because it is affecting one or more individuals in an adverse manner, so long as the same is legal.

Similarly, the articles cannot be said to run contrary to the provisions of the Act only on the ground that it provides something stricter than or beyond what the Act provides, expressly or impliedly, subject to the same not defeating the intent of the Act.

Therefore, articles, so long as the same is legally valid, are enforceable and binding on the company, in the same manner as it would have, had the same been incorporated in the provisions of law itself.