The Insolvency and Bankruptcy Board of India (“IBBI”/ “Board”) has invited comments on its Discussion Paper on Corporate Liquidation Process[1], dated 03.11.2019 (“Discussion Paper”), which essentially deals with two issues which have been the focal point of contrasting opinions as well as judicial interpretation at various instances, i.e. (a) Relinquishment of Security Interest in Corporate Liquidation Process; and (b) Applicability of section 29A of the Code to Compromise and Arrangement.

In this article, the author has delved into the said issues based on the problem statement presented by the Board, and has also attempted to analyse the propose amendments in the Insolvency and Bankruptcy Code, 2016 (“Code”) w.r.t. relinquishment of security interest in corporate liquidation.

We shall discuss the applicability of section 29A of the Code to Compromise and Arrangement in a separate article.

The question of Retrospective/ Prospective Application-

At the very outset, the question that remains a grey area, is whether the amendments proposed by way of the Discussion Paper are applicable on the extant cases also, or only on those cases which shall commence after notification of the proposed amendments.

Most recently, the Board vide The Insolvency and Bankruptcy (Amendment) Act, 2019[2] and The IBBI (Liquidation Process) (Amendment) Regulations, 2019, brought about several amendments, mostly curative in nature, with a view to remove difficulties in the extant liquidation matters. While the said amendments seemed to be a sigh of relief, the same turned out to be short-lived, as not much later, the Board, vide its circular dated 26.08.2019, being circular no. No. IBBI/LIQ/024/2019[3] clarified that the said amendments would only applicable on fresh cases of liquidation, and not on extant matters.

One may note that a reading of the aforesaid amendments, makes it evidently indicative of the fact that amendments proposed therein were inspired out of problems identified in the on-going matters of liquidation; and as such, were essentially curative in nature. It is a well-established principle that a procedural law, curative law, remedial law or clarificatory law is always intended to be retrospective; hence, a prospective application of the amendments rendered it nothing, but fruitless.

The author is of the view that a completely technical aspect like applicability of timelines, shall not be allowed to frustrate the very objective of a curative amendment; accordingly, its shall only be reasonable and prudent that the amendments proposed in the Discussion Paper are applied retrospectively.

We shall now move on to discuss the amendments as proposed w.r.t. realisation from assets by Secured Creditors, as dealt with in the Discussion Paper-

After a phase of extensive discussion and judicial interpretation, the Board vide the IBBI (Liquidation Process) (Amendment) Regulations, 2019[4] dated 25.07.2019, steered the way for presumptive relinquishment of security interest by secured creditors. The said amendment, by way of insertion of Regulation 21A, mandated upon the secured creditors to intimate to the liquidator, within 30 days of commencement of liquidation, their decision to relinquish or not.

While the first stepping stone seems to have passed, it was observed that while a time-frame for intimation of relinquishment is now set out in the Liquidation Regulations, the time limit within which the secured-creditors who chose not to relinquish, shall sell the respective asset, is not stipulated.

Where on one hand the question of relinquishment posed a substantial question on the asset’s inclusion in the Liquidation Estate, delay in realisation marks an unavoidable delay in the process of distribution.

Regulation 21A (2), of the Liquidation Process Regulations, provides that where a secured creditor proceeds to realise its security interest u/s 52 of the Code, it shall pay as much towards the amount payable towards insolvency process cost and liquidation cost, and workmen’s dues for the period of twenty-four months preceding the liquidation commencement date under section 53 of the Code, as it would have shared in case it had relinquished the security interest.

Let us analyse the provisions of Regulation 21A (2) with the help of an illustration:

P Ltd. is a company under-going liquidation, wherein Q is a secured creditor having security over assets worth Rs. 10 crores; IRP and Liquidation cost- Rs. 10 lakhs; and, workmen’s due for 24 months- Rs. 5 crores. (Assuming that the said asset is the only asset of the corporate debtor). There may now be two scenarios:

Now, assuming that the liquidator sells the asset at Rs. 7 crores, the sum so realised shall be disbursed in the manner as depicted in Fig 1. 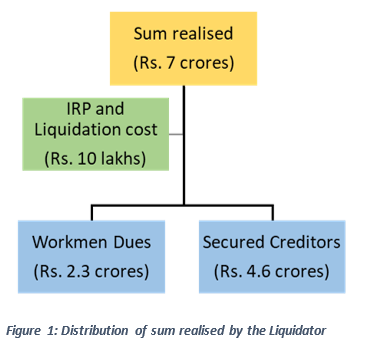 In this scenario, the sum realised by liquidator on sale the asset is first appropriated towards IRP and liquidation cost wholly; following which the workmen dues and secured creditors are pari-passu paid.

Say, Q realises Rs. 7 crores, then, in accordance with section 21(A) distribution has to be made in the same manner (see Fig 2.) as was done in Scenario 1 above. 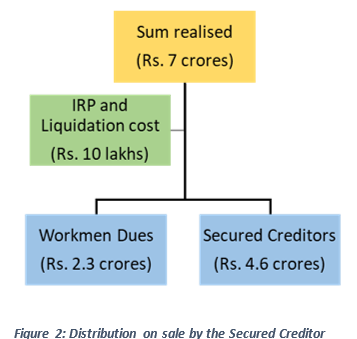 While for the remaining value of the debt, the secured creditor falls under section 53 (1) (e) (ii).

Thus, it is evident that the amount to be received by the secured creditor in either case remains the same.

Assignment of Value by Creditor

It is interesting to note that another alternative, which remains largely unexplored is assignment of value to the asset by the creditor. Provided for under section 37 of the Code, a secured creditor who decided to realise it assets under section 52 of the Code, may, assign and intimate to the liquidator, such value to the assets, which the creditor proposes to realize.

The above-provision as laid down by the Code is largely inspired from Rule 14.17 of the UK Insolvency Rules, 2016[5] which recognises this idea under the head “Redemption by office-holder.”

Timeline on realisation- Why is it necessary

While all the above cases of realisation essentially have the same impact on the creditors’ pockets, it is a noteworthy observation that until all secured creditors realise their securities fully, payment may neither be made under regulation 21A (2) of the Regulations nor under section 52 (7) of the Code. Hence, while the rights of secured creditors are well defined, their liability to contribute towards insolvency resolution process costs, liquidation costs and the workmen’s dues is not bound in a timeframe. This becomes highly counter-intuitive to the Code’s cardinal objective of timely and speedy redressal, and more so its latest amendment by way of which the stipulated time-frame for completion for liquidation process has been reduced from 2 years to 1 year.

It has been widely acknowledged and accepted that the Code is largely inspired from the UK Insolvency Act, thereafter tailor-made suiting the Indian dynamic. Accordingly, to analyse the above case from a broader perspective, a parallel may be drawn between the provisions of the Code and the UK Insolvency Rules, 2016.

In what may seem as an uncharted territory, timelines for realisation of assets by the secured creditors comes as a first by the Indian Legislature.

The Discussion Paper issued by the Board proposes to bring the following amendments in the IBBI (Liquidation Process), Regulations, 2016-

When a secured creditor proceeds to realise its security interest, it shall:

It is expected that the proposed amendments will prod the secured creditors to realise their security interest which will improve their realisation from the asset. While it may be apprehended by some that a rushed sale may lead to lower realisation than otherwise, an assumption as such may not be enough to overshadow the expected realisation and benefits derived therefrom- both from the stakeholder perspective and the creditor perspective.

1. Extension of Liquidation Period for sale of Asset, be provided for

From the proposed amendment, the following time-frame for liquidation process can be drawn (assuming that the creditor decided to retain security over assets)

(assuming that the creditor was unable to contribute or realize) T+180 No. of days left for liquidation 185 days

Attention must be drawn to the fact though a timeline has been proposed for sale of assets by the secured creditor, there has been no breather for the liquidator by way of any extension in liquidation period. Hence, in a situation where the asset eventually falls back in the Liquidation Estate, the Liquidator figuratively is left with half the time which he would otherwise have, for selling off the asset.

It is thus recommended that the aforesaid be considered and as such, an extension if deemed fit, be provided to the Liquidator for sale of assets, if cases where the asset falls back into the Liquidation Estate only on the 180th day from liquidation commencement.

2. Basis for estimation of costs-

The Discussion Paper by way of proposed amendments provides or contribution/ payment by the creditors in two cases- (a) Contribution of dues within 90 days; and (b) Repayment in excess of realizable value within 180 days.

While the Code provides for repayment in excess of realizable value vis-à-vis the value assigned by registered valuers (in case the asset is not realised), it remains silent as to what shall be the basis of computation of dues.

It is recommended that in case of such ambiguity, the creditor may take the Estimated Liquidation Cost computed as per Regulation 39B (1) of the IBBI (Corporate Insolvency Resolution Process) Regulations, 2016 as the basis, and accordingly the contribution shall be made as a percentage of such costs, on the basis of the creditor’s due as a percentage of the total dues.

The author is of the view that the proposed amendment may potentially be lucrative and shall complement the Code’s objective of concluding the process in a time-bound and efficient manner.

Ease of Exit of Businesses in India
Retrospective Operation of S. 29A & OTS under IBC – Analysing Prospects
Assessing the Viability of a Gold Spot Exchange in India
Secured Creditors under Insolvency Code : Searching for Equilibrium
Comments on Proposed Framework for Prepacks
Implications of IBC Ordinance, 2020- Quick Round up
Failed Redemption of Preference Shares: Whether a Contractual Debt?
MCA need not be mandatorily impleaded in applications: NCLAT sets-aside directions issued by of Principal Bench
0 replies