Yet another year went by and Indian securitization market certainly had a year to rejoice. Starting from the volume of transactions to innovative structures, the market has everything to boast about. Before we discuss each of these at length, let us take stock of the highlights first:

The volume of retail securitization grew by 123% as figures soared to ₹1.9 lakh crore compared to ₹85,000 crore in fiscal ’18. Mortgages, vehicle loans and microfinance loans constituted the three major asset classes comprising of 84% of the total volume. The growth was primarily propelled by a combination of three factors.

First, a few big players who stayed away from the market returned after the GST Council clarified that securitized assets are not subject to GST.

Second, Two non-banking companies (DHFL& IL&FS) rushed to securitize their receivables as traditional sources of financing dried up after September 2018. After this, banks started preferring portfolio buyouts over taking credit exposure on the NBFCs.

The graph below shows the performance of the Indian securitization market over the years: 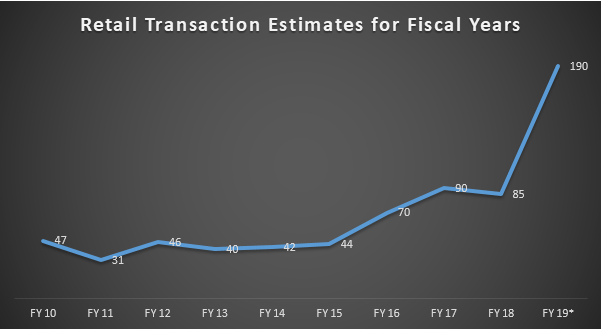 Traditionally the bulk of securitization transactions have been driven by Priority Sector Lending (PSL) from banks. At present though, securitization transactions are being increasingly backed by non PSL assets that are making their presence felt as they gain market traction. The trend has been clear. The share of non-PSL assets as a part of total transaction rose to a record of 42% in 2018, up from 33% in 2017 and a relatively moderate share of 26% in 2016. Banks are focusing on securing long term assets such as mortgages that have displayed fairly stable asset quality to expand their retail asset portfolio.

An additional recurring theme is the growing popularity in PSLCs which serves as a direct alternative to securitization. The volume of transactions have skyrocketed to ₹ 3.3 lakh crore in fiscal ’19 up from ₹ 1.9 lakh crore in fiscal ‘18 and ₹ 49,000 crore in fiscal ‘17. PSLCs which were introduced in 2015, was an idea which appeared in the report of a Dr. Raghu Ram Rajan led Committee- A Hundred Small Steps. Out of the four kinds of PSLCs, the PLSC- General and PSLC- Small and Marginal Farmers remain the highest traded segments. The supply side consists of private sector banks with excess PSL in the general PSLCs category and Regional Rural Banks in SFMF category.

Another point of note is the increasing share of the DA’s in the securitization market. The move from PTCs to DA isn’t surprising given the absence of credit enhancements, amount of capital requirements and relatively less regulatory due diligence in DAs. The fact that the share of PTC transaction fell from 47% in fiscal ‘17 to 42% in fiscal ’18 and further to 36% in fiscal ’19 serves as a case in point. However, one hasn’t impeded the growth for the other. DA transactions soared a record 146%. Whereas PTCs soared 95% reaching a volume of ₹69,000 crore. Also, mortgages still remain the preferred asset class, accounting for almost 74% of DA volumes and 46% of total securitization volumes. 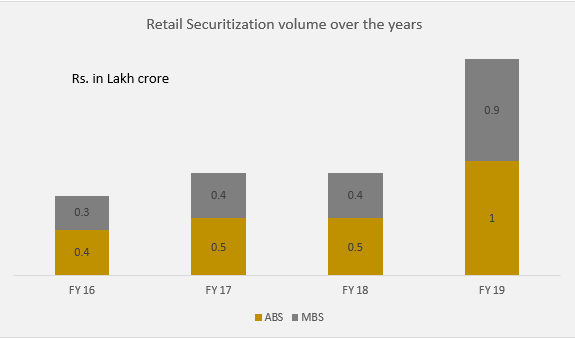 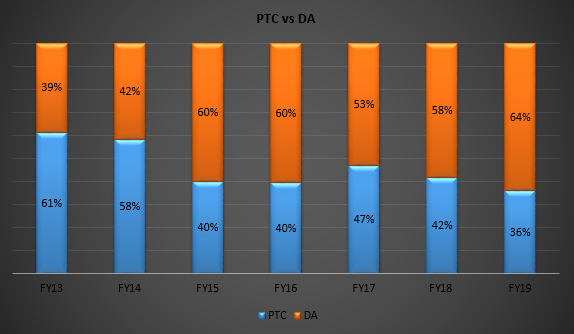 India on the Global Map

2018 was a landmark year for global securitization with over a trillion dollars’ worth of issue, as the memories of the 2008 crisis gradually fade into oblivion. The U.S has been the major player in the global market, issuing over half of the total transactions by volume. Europe recorded a surge in volume clocking $106 billion against $82 billion in 2017. In Asia, China both grew and remained the dominant player in Asia at $310 billion, followed by Japan at $58 billion. Elsewhere issuance in Australia and Latin America declined. Some potential factors that could affect the global markets in the coming future include the Brexit uncertainty, market volatility, rising interest rates, renegotiations of existing trade agreements and liquidity. Some of these are contentious issues, the effects of which could sustain beyond the near future. 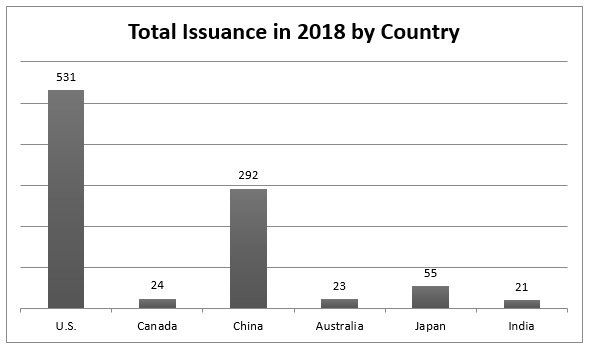 Heading into the next fiscal year, some of the tailwinds that propelled the market in fiscal 2019 are fading gradually. Pent-up supply following the implementation of the Goods and Services Tax (GST) has almost exhausted, the funding environment for non-banks have been steadily stabilizing and the relaxation on the minimum holding period will be only available till May 2019. The entry of a new segment of investors- NBFC treasuries, foreign portfolio investors, mutual funds and others such brought about differing risk appetites and return aspirations which paved the way for newer asset classes. The trend for education loan receivables and consumer durables loan receivables accelerated in fiscal 2019. Although, the overall volumes of these unconventional asset classes are relatively small at present, investor presence in these non-AAA rated papers is a good sign for the long term prospects of the securitization markets.