In the wake of rising discrepancies and deficiencies witnessed in the implementation of NBFCs general services, the Reserve Bank of India(“RBI”) came up with The Ombudsman Scheme for Non-Banking Financial Companies, 2018 (hereinafter referred to as the “Scheme”)[1] to address and target any complaint by any party aggrieved by any discrepancy in the service obligation of the NBFC.

The intent behind this scheme is to alleviate any laxity in the service delivery mechanism of the NBFC such that any party aggrieved may turn to a system for Ombudsman for a quick and ready solution and seek for any redress regarding any issue concerned with it.

The Scheme shall come into effect and force from February 23, 2018.

Applicability of the Scheme

The Scheme lucidly lays down the applicability of the provisions to the following class of NBFCs:

Though the scheme presently is applicable to all the deposit taking NBFCs, it is however proposed to operationalise the scheme for the remaining identified categories of the NBFCs in the later stage. Hence currently, the scheme does not reflect any obligation on the part of the non-deposit taking NBFCs with asset size of one billion rupees and above to comply with the requirements of various provisions of the scheme.

Non-Applicability of the Scheme

The RBI is of the view that one or more officers in the rank of not less than General Manager shall be called the Ombudsman to carry out the functions entrusted by or under this Scheme. The territorial jurisdictions of the Ombudsman cover four metro centres viz. Chennai, Kolkata, Mumbai and New Delhi for handling complaints from different zones.

The Scheme specifies various grounds for complaints as per which the customer may approach the Ombudsman, they can be further classified and rearranged as follows:

While the directions do specify at length the grounds for filing of compliant, they also specify certain conditions which must be satisfied before filing of a complaint. One of the most notable conditions is the fact that the complainant, before approaching the Ombudsman, must approach the NBFC. In case the NBFC is of no help to the complainant, only then can he/she seek remedy from the Ombudsman. A detailed flowchart covering the possible scenarios for the aforesaid case has been shown below. 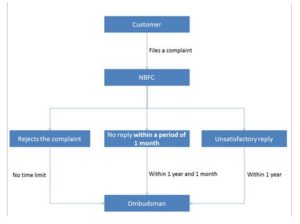 This Scheme also specifies certain other conditions which must be satisfied before seeking redressal from the ombudsman and they are:

Additionally, the Ombudsman may decide to reject a complaint, at the time of inception or during the process as well in the following cases:

Process for filing Complaint under the Ombudsman Regime

Consequent to receiving of a complaint, the primary road of action for the Ombudsman remains to arrive at an amicable solution, which means a Settlement.  A complaint will be adjudged to be settled when any of the following scenarios are satisfied:

In cases where it is deemed practical to do so, the Ombudsman shall intimate the concerned NBFC and forward all requisite documents with the view of reaching an understanding. The Ombudsman shall consider documents and declarations from both the concerned parties and in case a decision cannot be arrived at, a meeting may be arranged between the two. In case a settlement has been reached through such meeting, the proceedings of the meeting must be signed by both parties concluding the same.

Award by the Ombudsman

If the complaint is not settled by agreement, the Ombudsman shall pass an Award where it will either allow or reject a complaint. While doing so it shall take into account all the relevant evidence placed before him, the RBI circulars and Directions as prescribed from time to time, and shall state the reasons for passing such an award.

The Ombudsman shall prescribe certain conditions of specific performance on the part of the NBFCs if it allows the complaint and also direct the NBFCs for the payment of any compensation. The complainant shall also submit to the NBFC and the Ombudsman concerned within a period of 30 days, a letter of acceptance of the Award in full and final settlement of his claim.

The NBFC shall unless it has preferred an appeal within one month from the date of receipt by it of the acceptance in writing of the Award by the complainant comply with the Award and intimate compliance to the complainant and the Ombudsman.

Appeal before the Appellate Authority

Any person aggrieved by the award may within 30 days of the receipt of the communication of Award or rejection of the complaint, prefer an appeal before the Appellate Authority. An appeal by an NBFC may be filed within 30 days from the date on which the NBFC receives letter of acceptance of the Award from the complainant.

Appeal may be filed by the NBFC only with the previous sanction of the chairman or the Managing director/Chief Executive Officer or any other officer of equal rank.

Quick Actionable by NBFCs pursuant to the scheme

The Scheme though is currently applicable to only deposit taking NBFCs, however the intent is to gradually extend it to other NBFCs as well. Following is a set of actionable required on the part of the NBFCs:

Display salient features of the scheme for Public Knowledge

To appoint Nodal Officers at their Head/ Registered/ Regional/ Zonal Offices who shall be responsible for representing the company and furnishing information to the Ombudsman in respect of complaints filed against the NBFC.

Information to all offices of Ombudsman

Inform all the Offices of the Ombudsman about the appointment of nodal officers. Wherever more than one zone/ region of a NBFC is falling within the jurisdiction of an Ombudsman, one of the Nodal Officers shall be designated as the ‘Principal Nodal Officer’ for such zones or regions.

Obligations of the NBFCs pursuant to the Scheme

Provide information to the Ombudsman when there is a call for any to decide upon any complaint filed, and furnish all certified copies and documents as required from time to time.

Where the Ombudsman decides to allow the compliant, it is required to do specific performance of its obligations in addition to or otherwise, the amount, if any to be paid by it to the complainant by way of compensation for any loss suffered by the complainant arising directly out of the act or the omission of the NBFC.

It shall be the obligation of the NBFC concerned to implement the settlement arrived with the complainant or the Award passed by the Ombudsman when it becomes final and send a report in this regard to the Reserve Bank of India within 15 days of the award becoming final.

NBFC’s are required to pay an amount which is more than the actual loss suffered by the complainant as a direct consequence of the act, omission, or commission of the NBFC, or one million rupees whichever is lower.

Compensation for any harassment

NBFCs are  also required to pay compensation as a requirement of the Reward passed by the Ombudsman not exceeding one hundred thousand rupees to the complainant, taking into account the loss of time, expenses incurred, harassment and mental anguish suffered by the complainant.

In a nutshell, this will increase the responsibility of the NBFCs while dealing with the customers and other stakeholders and ensure that proper redressal is provided by them to the aggrieved party so as to avoid scrutiny of the Ombudsman.

Presentation on corporate structuring and regulatory framework Revised Section 42: What’s in the name!
Scroll to top