Blog - Latest News
You are here: Home / Accounts and Audit / Indefinite deferral of IFRS for banks: needed reprieve or deferring the...

On 22 March, 2019, just days before the onset of the new financial year, when banks were supposed to be moving into IFRS, the RBI issued a notification[1], giving Indian banks indefinite time for moving into IFRS. Most global banks have moved into IFRS; a survey of implementation for financial institutions shows that there are few countries, especially which are less developed, where banks are still adopting traditional GAAPs. However, whether the Notification of the RBI is giving the banks a break that they badly needed, or is just giving them today’s gain for tomorrow’s pain, remains to be analysed.

This article analyses the major ways in which IFRS would have affected Indian banks, and what does the notification mean to the banking sector.

Major changes that IFRS would have affected bank accounting:

The ECL methodology prescribed is very subjective in nature, this implies that the model will vary based on the management estimates of each entity; this is in sharp contrast to the existing provisioning methodology where regulators prescribed for uniform provisioning requirements.

Currently, a significant amount of NPAs are currently been sold to ARCs. Normally, transactions are executed in a 15:85 structure, where 15% of sale consideration is discharged in cash and the remaining 85% is discharged by issuing SRs. Since, the originators continue to hold 85% of the SRs issued against the receivables even after the sell-off, there is a chance that the trusts floated by the ARCs can be deemed to be under the control of the originator. This will lead to the NPAs coming back on the balance sheet of banks by way of consolidation.

It is expected that the new requirements will lead to capital erosion for most of the banks and for some the hit can be one-half or more, considering the current quality of assets the banks are holding. This deferment allows the banks to clean up their balance sheet before transitioning which will lead to less of an impact on the capital, as it is expected that the majority of the impact will be caused due to ECL provisioning.

World over most of the jurisdictions have already implemented IFRS in the banking sector. In fact, a study[3] shows that major banks in Europe have been able to escape the transitory effects with small impact on their capital. The table below shows the impact of first time adoption of IFRS on some of the leading banking corporations in Europe: 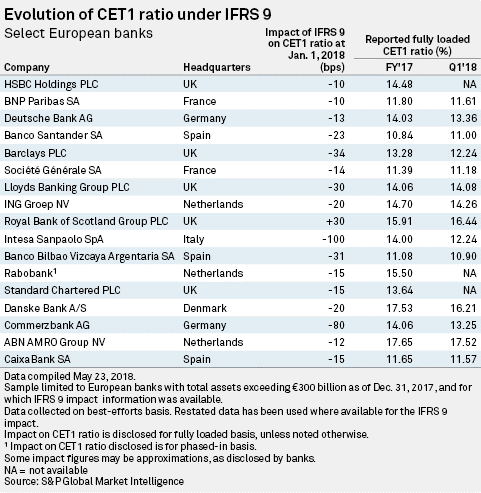 Impact of this deferment on NBFCs

While RBI has been deferring its plan to implement IFRS in the banking sector for quite some time, this deferral was not considered for NBFCs at all, despite the same being admittedly less regulated than banks. The first phase of implementation among NBFCs was already done with effect from 1st April, 2018.

This early implementation of IFRS among NBFCs and deferral for banks leads to another issue especially for the NBFCs which are associates/ subsidiaries of banking companies and are having to follow Ind AS. While these NBFCs will have to prepare their own financials as per Ind AS, however, they will have to maintain separate financials as per IGAAP for the purpose of consolidation by banks.

What does this deferment mean for banks which have global listing?

As already stated, IFRS have been implemented in most of the jurisdictions worldwide, this would create issues for banks which are listed on global stock exchanges. This could lead to these banks maintaining two separate accounts – first, as per IGAAP for regulatory reporting requirements in India and second, as per IFRS for regulatory reporting requirements in the foreign jurisdictions.