The Reserve Bank of India (RBI), on 12th February, 2018[1], notified the “Resolution of Stressed Assets – Revised Framework” (Revised Framework). This aims to replace the four year old, “Framework for Revitalised Distressed Assets in the Economy”[2] (Framework) read with association circulars, guidelines and directions issued from time to time. To be precise the following instructions/ mechanisms have been withdrawn to make way for this Revised Framework:

(i)    Framework for Revitalising Distressed Assets

(v)    Change in Ownership outside SDR

The preamble of the Revised Framework states that the changes have been effected with the intention to align the measures for dealing with stressed assets with the Insolvency and Bankruptcy Code (IBC). Broadly, the Revised Framework is an attempt to ensure timeliness of resolution of these stressed accounts. Further, with this RBI has also tried to arrest the various measures resorted to by the banks for ever-greening the accounts.

The notification states that the Revised Framework will come into effect from the date of notification itself, i.e. 12th February, 2018.

In this write-up we intend to not only capture the Revised Framework at length, but also draw parallels from the existing Framework.

Identification and monitoring of stressed accounts

The RBI has also amended the periodicity for CRILC forms, which are meant for the purpose of the reporting and monitoring of large and stressed credits. The revised timelines and the revised scope for filing have been produced below:

Resolution plan and timelines for implementation

The Resolution Plan (RP), which is the equivalent of Corrective Action Plan under the erstwhile Framework, is a bail-out package to be prepared by the lender(s), singly or jointly, for the purpose of reviving the distressed account, provided the same looks feasible. The RP may involve any actions / plans / reorganization including, but not limited to, regularisation of the account by payment of all over dues by the borrower entity, sale of the exposures to other entities / investors, change in ownership, or restructuring.

As per the Revised Framework, the banks must have in place policies for resolution of stressed assets under this framework, including the timelines for resolution and the same be approved their Board of Directors.

An RP involving restructuring or change in ownership will require an independent credit evaluation (ICE) of residual debt to understand if the account is eligible for the RP or not. The ICE will have to be done by independent credit rating agencies, recognised by the RBI. The following must be noted with respect to ICE:

This requirement shall apply with implemented with immediate effect and will be applicable even if the restructuring package is implemented before 1st March, 2018. 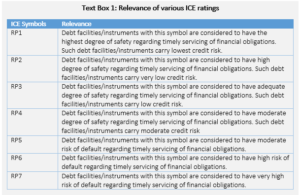 In the past, the RBI had come with several measures to tackle the rising level of stressed assets in the economy, but none of them worked out well. Delays in implementation of the measures can be treated as one of the most important reasons for these measures not working out. Having realised the shortcomings from the past, the RBI has prescribed timeline for implementation. For the time being, the RBI has announced the timeline for implementation of RP in case of accounts where the total exposure is ₹ 20 billion (₹ 2,000 crore), with a promise to notify the timelines for smaller accounts as well over a period of two years.

The prescribed timeline for implementation is as follows:

In respect of accounts with aggregate exposure of the lenders at ₹ 20 billion and above, on or after March 1, 2018 (‘reference date’), including accounts where resolution may have been initiated under any of the existing schemes as well as accounts classified as restructured standard assets which are currently in respective specified periods (as per the previous guidelines), RP shall be implemented as per the following timelines:

Therefore, these cases get a period of 180 days for implementation of RP. This time frame is largely in line with the one under IBC; even under IBC, applicant gets time till 180 days for preparation of resolution plan and implementing the same. This is also similar to the timelines provided in the erstwhile Framework; for instance, in case of strategic debt restructuring, a period of 90 days to approve the package and another 90 days were allowed to convert the debt into equity. However, under the scheme for sustainable structuring of stressed assets, a period of only 90 days was allowed for approval and implementation of the package.

What if the RP is not implemented within the specified timeline?

The most apparent question that arises next is what would happen if the RP is not implemented within the specified timeline. As per the Revised Framework, if the lender(s) fails to implement the RP within the specified timeline, it will have to, singly or jointly with other lenders, make an application for insolvency of the borrower under the IBC within a period of 15 days from the expiry of the said timeline.

What happens if RP fails event after its implementation?

The next question that arises is, what if an account, despite the timely implementation of RP, fails to perform satisfactorily. The Revised Framework states that if an account fails to perform satisfactorily during the specified period, that is, if it defaults anytime during the specified period, the lenders shall file insolvency application during, singly or jointly, under the IBC within a period of 15 days from the date of such default.

For this purpose, the term “specified period” means the period starting from the date of implementation of the RP and ending on –

In reality, the restructuring packages in India are typically back heavy, where the amount recovered during the first few years are insignificant and larger shares of the pie are recovered towards to the end of the tenure. Therefore, in most of the cases, this specified period will be longer than what has been the case all these years. Under the existing Framework, the meaning of the term “specified period” was restricted only to the following:

Specified Period means a period of one year from the commencement of the first payment of interest or principal, whichever is later, on the credit facility with longest period of moratorium under the terms of restructuring package.

Therefore, the inclusion of the repayment clause will cause a lot of difference.

Prudential norms and norms for restructuring

The Revised Framework clearly lays down the prudential norms with respect to the accounts where RP has been implemented and norms for various aspects of restructuring these accounts and they are as follows:

a. In case the exposure is ₹ 1 billion (₹ 100 crores) or above, at least one CRA must be engaged to rate the residual debt;

b. In case the exposure is ₹ 5 billion (₹ 500 crores) or above, at least two CRAs must be engaged to rate the residual debt;

c. The residual debt must attain investment grade rating of BBB- or above

d. If rating is obtained from more than one CRA, all of them should fetch the minimum prescribed rating

The additional requirement for large credits will act as an additional check before upgrading the account.

However, if the account fails to demonstrate satisfactory performance during specified period, the account shall have to immediately be reclassified based on the original repayment schedule that existed before the implementation of the RP.

2. Provisioning norms: Provisioning will have to be done in accordance with the requirements laid down in the Income Recognition and Asset Classification norms.

5. Conversion of principal into debt/ equity or conversion of unpaid interest into FITL –

a. Banks shall have to conduct necessary due diligence in this regard and clearly establish that the acquirer is not a person disqualified in terms of Section 29A of the Insolvency and Bankruptcy Code, 2016.

c. The new promoter must be in ‘control’ of the borrower entity as per the definition of ‘control’ in the Companies Act 2013 / regulations issued by the Securities and Exchange Board of India/any other applicable regulations / accounting standards as the case may be.

d. The conditions with respect to timeline for implementation of RP must be complied with.

The most important part of this is that section 29A of the IBC is made binding on the prospective buyer, even if the lenders decide not to adopt the NCLT route. 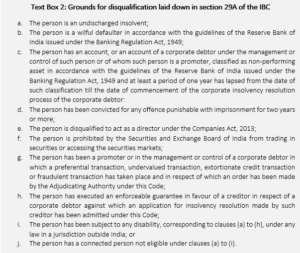 However, the asset classification will have to be downgraded if the account fails to demonstrate satisfactory performance during the specified period.

As already stated above, the Revised Framework also attempts to arrest such arrangements which are nothing but disguised restructuring arrangements, like the one illustrated below: 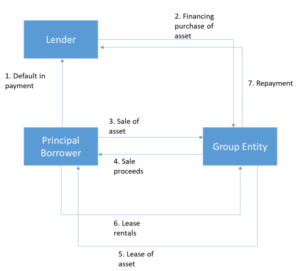 The Revised Framework attempts to arrest these kind of arrangements and therefore, lays down that these accounts will be treated as restructuring in the books of the lenders for the purpose of IRAC with respect to the residual debt of the seller or the fresh exposure on the buyer if the following conditions are met:

While the RBI has tried to cover all the aspects of restructuring comprehensively under the Revised Framework, but there are certain issues which remain unaddressed, namely:

1. What will happen to the financial institutions other than banks, like NBFCs?

However, this will create problems in case of arrangements involving banks as well as such which are not covered under the Revised Framework, like NBFCs. Not only the scope of the two frameworks are like chalk and cheese, the position of the remaining regulated entities under the Revised Framework is clear. Hopefully, the RBI will come out with some clarification in this regard.

2. Is the NCLT route under IBC still open for banks after this?

While the intention of this notification is harmonise the guidelines for dealing with the stressed accounts with the IBC, however, it is not very clear from the Revised Framework, if going forward, a lender has to first take action under the Revised Framework before knocking the doors of NCLT under the IBC. Nothing in the Revised Framework bars anyone from moving an application for insolvency of the borrower in the NCLT under IBC. Therefore, theoretically, the option will still be open for the banks to adopt the IBC route instead of this. However, practically, in India, considering the self-control that can be achieved under this Revised Framework, there is a strong likelihood that this will be favoured more than the NCLT route.

3. Is the concept of JLF really dead?

While formal JLF mechanism has been abolished, joint action by unpaid lenders against a borrower will still have to be the rule, since, if the intent of the RBI was to let each unpaid lender take care of his interest separately, the guidelines were not required at all. The moment we believe that the action is joint action, the issue is – what will be the mode of voting in the joint body of lenders? Since no particular voting mechanism has been laid in the new Guidelines, it may mean (a) unanimous consent; or (b) simple majority; or (c) such majority as the lenders define for themselves.

Unanimous consent is ruled out, as the same is never achievable. The answer, therefore, lies in favour of (b) or (c).

The Revised Framework is a big move by the RBI towards eradication of the growing burden of sick loans from the economy. This framework leads to a shift from prescriptive guidelines of stress management by banks to automated resolution of the distressed assets. The abolishment of the JLF mechanism supports the preceding statement; earlier, the JLF had to operate as per the policies laid down by the RBI, but now the lenders can decide the mode of operation mutually.

Also, the RBI’s attempt to tighten the loose ends with respect to timeline for implementation of bail-out packages also comes as a welcome move.