Raghuram Rajan and Viral Acharya, both having got the first-hand experience of holding the reins at the RBI, have prescribed several urgent measures to restore the health of the banking system. Neither do we have the fiscal space to support the banking system with fresh doses of capital, nor can we afford any more spikes in the almost top-of-the-world GNPA ratios. The duo, who have written several articles in the past, wrote this piece[1] on 21st Sept. 2020.

In a strongly worded write-up, the two celebrated academics of the financial world, have clearly taken it out on the bureaucracy and the government.  The authors say while advocacy for comprehensive banking sector reforms have been done in the past, the onus of not making it happen is clearly on the government itself: “There are strong interests against change, which is why many would-be reformers are cynical, and either have given up, or recommend revolutionary change that has little chance of being implemented. We are more optimistic that a middle road is achievable, given that the greatest stumbling block has been the government, the bureaucracy, and the interests within it. With the enormous strains on government finances from the slow growth pre-COVID and the subsequent effects of the pandemic, the country has to transform the banking

sector from being a drain on government resources and an impediment to growth to becoming an engine of growth. This will not happen through incremental reforms. The status quo is fiscally untenable.”

The authors are unsparing when they clearly say the Department of Financial Services should be scrapped. The authors recommend that “Winding down Department of Financial Services in the Ministry of Finance is essential, both as an affirmative signal of the intent to grant bank boards and management independence and as a commitment not to engage in “mission creep” when compulsions arise to use banks for serving costly social or political objectives.” They also say that despite clear recommendations of the Nayak Committee in 2014[2], nothing has changed in terms of autonomy of the banks in the country. The authors may be resonating the bitterness of many senior bankers when they say: “Parliamentarians of all parties are not immune to the lure of public sector banks – the banks are often asked to arrange the logistics for their fact-finding committee meetings in enjoyable locales across the country. And Finance Ministry bureaucrats are reluctant to let go of the power that allows a young joint secretary to order the chairpersons of national banks around”

Banks in India cannot afford to have the false sense of having safe assets by “lazy lending”. The term, coined by Dr Rakesh Mohan, the-then Deputy Governor of RBI[3], refers to bankers choosing to invest in risk-free government bonds, even when the opportunity cost of capital for them is much higher. At the same time, banks also cannot afford to do “crazy lending”, by lending to riskiest of borrowers as more credit-worthy borrowers choose to rely on capital markets, and thereby, pile up non-performing loans on their balance sheets.

Indian banks, particularly PSUs, have managed to pile up bad loans on their balance sheet. There were sizeable NPAs even before the Covid. Six months of covid-moratorium meant virtually no cashflows, and as the servicing burden on the borrowers has increased over these months, most banks will be forced to use the loan restructuring option following covid-disruption[4]. The contention that the covid-disruption will become the alibi to restructure loans that were even otherwise fragile does not require much evidencing. 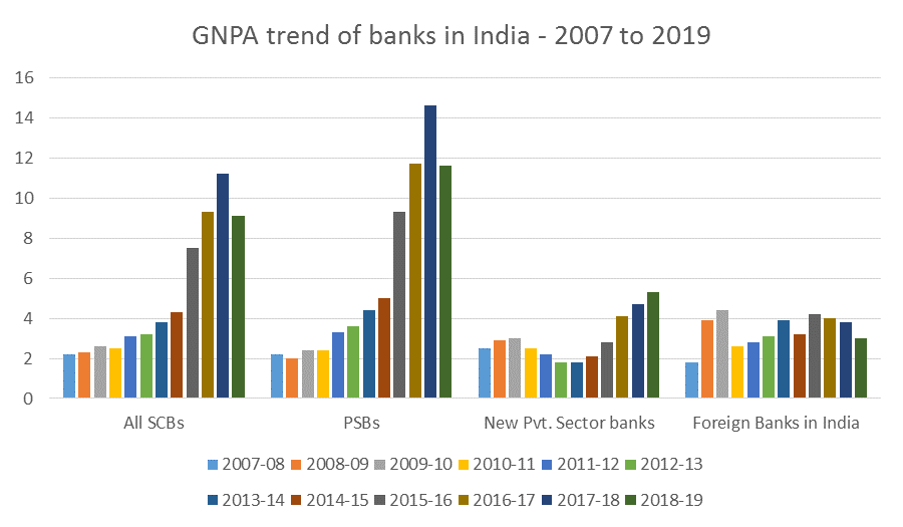 Rajan and Acharya refer to the well-known ever-greening problem of Indian banking – with the bankers supporting bad loans by sequential doses of further lending, and the promoters continuously stripping the assets out and diverting profits and cashflows, leaving the borrower to be a “zombie”. Authors say that banks, by keeping the zombies alive, do a double damage to the system – on one hand, the bankers continue to focus on bad loan management and therefore, spend less time and resources to creating healthy loans, and on the other, the presence of half-dead firms discourages healthy industries as well.

While banks over the world have converged to IFRS, which provides for an “expected loss” model, the Indian banking system is still driven by the regulatory requirement of provisioning, in form of the so-called IRAC (Income recognition and asset classification) norms. However, periodically, the RBI comes with schemes whereby banks can avoid classifying a loan as an NPA. 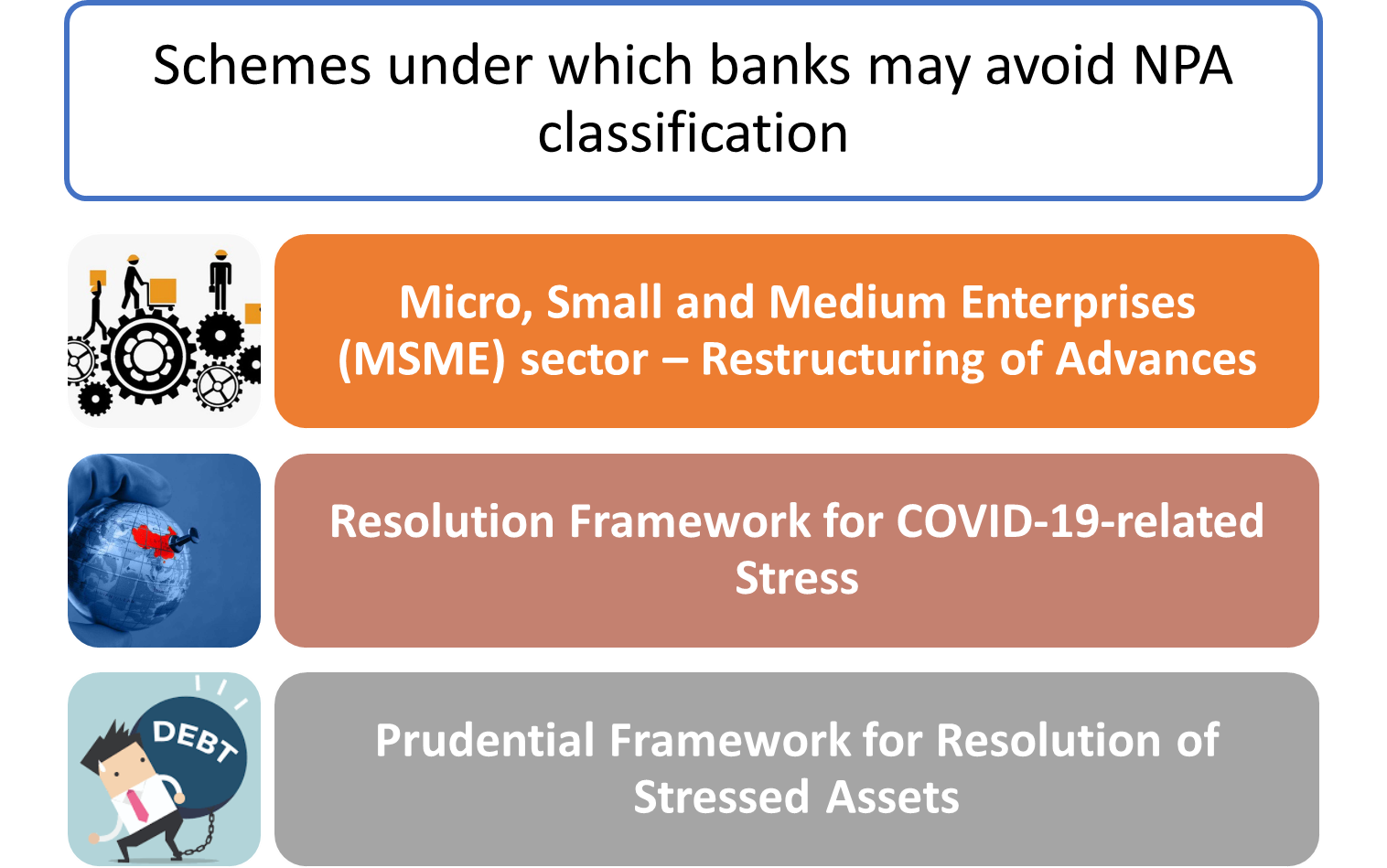 “With forbearance in the form of delayed provisioning, not only does the firm’s condition deteriorate, but the banker has to take a large loss when he eventually restructures the loan. So instead the banker holds off, under-provisioning mounts, and what was meant to be temporary regulatory forbearance inevitably creates banker demand for more, near-permanent forbearance”, say the authors. The authors say that fear-struck bankers are more comfortable in letting the NCLT process take over the bankers’ resolution, since, in that case, the decisions are made by the NCLT-appointed professional, and not by the bank, who may thus get sheltered by the proverbial 3 Cs that haunt bankers.

Arguing for the need to revisit sec. 29A of the Insolvency Code, Rajan and Acharya say that the provision are needed at the time when the defaulting borrower was to be prevented from buying bank his own assets and potentially scaring other buyers. But in the present scenario of pandemic stress, this will also prevent the promoter whose business faltered for no fault of his. The authors also reflect the reality when the say the NCLT “already has a large backlog of cases, some of which have dragged on for much longer than the targeted duration for bankruptcy. It cannot possibly handle the volume of distress that will have to be dealt with post-pandemic without a significant expansion of the number of its judges and benches. Unfortunately, the quantum of trained personnel that is needed may simply not exist.”

The authors also advocate the retention of the debtors’ control, at least in the post-pandemic restructurings. Notably, the creditors’ in control model that India has adopted, is inspired by the UK approach, whereas the USA has a debtor-in-control approach.

The bad bank experience has had a limited success in India. IDBI created SASF in 2004. However, neither did it help the bad loans, nor IDBI. Subsequently, India has worked on a private sector model of so-called “bad banks”, in form of the ARCs. However, the transfer of loans to ARCs may mostly take the form of security receipts, which is paper-for-paper. It is only in the recent past that banks have insisted on all-cash loan transfers.

Hence, authors argue that what may be more effective is a transparent market for bad loans. Notably, the draft Directions for Sale of Loans, issued by the RBI for public comments on 08th June, 2020[6], provided, among other things, an auction-based disposal of bad loans. There is apparently also a discussion on permitting foreign investors to invest in bad loans directly.

Additionally, the authors also suggest the creation of a “public credit registry”. Currently, there are multiple registries in India working with significant overlaps and lack of cohesiveness. CERSAI, NeSL, and CRILC are such registries, each intended to serve different purposes. However, it will not be a high hanging fruit to combine them into a loan registry, where the information about a loan, its collateral, performance, etc. are all pooled into a single database. Authors say that KAMCO, Korea, after completion of its asset management task, is now evolving itself into a loan registry.

Authors suggest that selling of loans will bring transparency and price discovery. Currently, RBI’s regulatory framework has been restraining banks from selling loans, mainly on the concerns of originate-to-hold model.

The authors contend that if a transparent pricing could emerge by creating a secondary market, a bad bank could emerge by the market mechanism itself. These market-based bad banks can have sectoral focus, rather than a generic pool of NPAs as is currently the case. The authors also cite global examples of warehousing bad loans to find a more opportune time for disposing them.

Lending can be, as it traditionally has been, focused on the on-balance sheet assets and collateral, or may be focused on the cashflows of the business. In case of asset-based lending, the lender focuses on balance sheet ratios such as leverage and loan-to-value. In cash-flow based lending approach, the lender focuses on liquidity and debt-servicing ability.

An RBI Expert Group led by Shri U K Sinha recommended a cash-flow based lending structure for MSME funding[7].

Recently, large Indian banks announced plans to move to cashflow-based lending, such as SBI. SBI Chairman Rajnish Kumar stated “SBI will switch to a cash flow-based lending model beginning April 2020 from a mechanism where loans are given against assets”[8].

The authors have recommended a transition from asset based lending to (also) cash flow based lending. The authors mention that “Banks could rely more on loan covenants for large borrowers, tied to liquidity and leverage ratios (instead of lending purely against assets). This would set up “trip wire” points for enhancing loan collateralization, rather than requiring it from the beginning; in case of small borrowers, reliance on GST invoices and utility payment bills, among other cashflow information, can facilitate such a transition.”

The authors talk about the problem relating to certain promoters running large conglomerates while sitting on thin slices of equity. Due to this the following problems are highlighted by the authors, namely, a) this creates systemic risk in the banking system, b) leads to concentration of corporate power and a complex maze of related party transactions between financial and real subsidiaries of the group that are often the veil behind which frauds are perpetrated.

The authors recommend that highly indebted groups should not be allowed to expand their footprint significantly by using bank money to bid on new projects. Group lending norms should be enforced as the economy recovers. Further, the authors state that aggregate permissible system exposures should be linked to the aggregate debt equity ratio for the group (including non-bank borrowing and foreign borrowing). Over-leveraging by specific promoters or groups needs to be limited if the Indian banking system’s health is to be restored.

Our write up & FAQs on the framework may be viewed here: http://vinodkothari.com/2020/08/resolution-framework-for-covid-19-related-stress-resfracors/