Companies will have a tough time in complying with ever changing provisions relating to RPTs. In view of several recommendations made in the Company Law Committee report (CLC Report) dated 1st February, 2016, Companies (Amendment) Bill, 2016 (Bill, 2016) was introduced in Lok Sabha on 16th March, 2016[1], 37th Standing Committee Report of December, 2016 and Companies (Amendment) Bill, 2017 (Bill, 2017) as passed by both Houses of Parliament. .

Key concerns relating to RPTs that were discussed in the CLC Report:

This article analyses the amendments proposed and whether same bridges the gap between the provisions of Listing Regulations and Act, 2013.

With the intent to capture companies incorporated outside India within the purview of meaning of related part, words ‘any company’ reflecting in clause (viii) of sub-section (76) of section 2 of Act, 2013 was substituted with ‘any body corporate’ in Bill, 2016. The revised provision read as under:

“(viii) any body corporate which is –

(C) an investing company or the venturer of a company”

Instead of replacing ‘company’ with ‘body corporate’ in the aforesaid clause, the correct amendment would have been inserting an explanation similar to explanation (c) to section 2 (87) in the definition of associate company under section 2 (6) of Act, 2013. In the absence of the same, the term ‘associate company’ cannot include associates incorporated outside India.

In case of a subsidiary and holding company, by virtue of explanation (c) to section 2 (87), company includes a body corporate. However, if the intent was to make it absolutely clear, an explanation similar to explanation (c) aforesaid could be inserted in section 2 (46).

Bill, 2017 inserted an explanation in Section 2 (76) to bridge the gap to the following effect:

Section 177 of Act, 2013 specifies the scope of Audit Committee with respect to approving the transactions entered into with related parties and subsequent modifications thereof. The reason behind the same is that the Audit Committee comprises of majority of independent directors i.e. disinterested members of the Board. The transactions for which Audit Committee approval needs to be obtained, are not limited to those specified under section 188 (1) (a) to (g) but all transactions entered into with the related parties specified under section 2 (76). In case of listed entities, the scope expands to all related parties under section 2 (76) and applicable accounting standards (i.e. AS18 or IND-AS 24 as the case may be). While section 177 does not specifically mandate prior approval, the CLC report has clearly specified that the existing requirement to pre-approve all RPTs should continue.

As evident from the proposed amendments to Section 177, there seems to have a vertical distinction made in relation to transactions covered under section 188 and those not covered under the same. Power to ratify transactions have been granted only for any transaction involving any amount not exceeding 1 crore rupees. This seems to be contradicting with the provisions relating to omnibus approvals, as provided under proviso to sub-rule (4) of Rule 6A of Companies (Meetings of Board and its Powers) Rules, 2014 as reproduced hereunder:

“Provided that where the need for related party transaction cannot be foreseen and aforesaid details are not available, audit committee may make omnibus approval for such transactions subject to their value not exceeding rupees one crore per transaction.”

The proviso above grants a deemed omnibus approval for such transactions. Why will the need to ratify such transactions from Audit Committee ever arise? While the intent was to address the concern of possible misuse of the flexibility to ratify transactions within 3 months from the date of transaction, the committee recommended prescribing an upper threshold of 1 crore rupees. However, the same appears to be inconsistent with the existing provisions of the Act, 2013. If the said ratification is not obtained, such transaction shall be voidable at the option of the Audit Committee and if the transaction is with the related party to any director or is authorised by any other director, the director concerned shall indemnify the company against any loss incurred by it.

Further, what will be the fate of RPTs exceeding value of Rs. 1 crores, not placed before Audit Committee for prior/ omnibus approval remains unanswered. In case Audit committee disapproves any transaction, the Board may still consider approving the same subject to ensuring compliance of section 177 (8).

Approval in case of transaction between holding company and WOS

Listing Regulations as well as erstwhile Clause 49 exempted the transaction between holding company and its wholly owned subsidiary[2] from the requirement of obtaining prior approval of Audit Committee and shareholder’s approval in case of same being material RPTs. Provisions relating to granting of omnibus approvals, in order to align the provisions with Clause 49/Listing Regulations, were inserted vide Companies (Amendment) Act, 2015 and were enforced with effect from 15th December, 2015. However, corresponding exemption in case of transactions between holding company and its wholly owned subsidiary were not provided under Section 177 (4) (iv).

Bill, 2017 has made an attempt to exempt such transactions by way of inserting the following proviso:

“Provided also that the provisions of this clause shall not apply to a transaction, other than a transaction referred to in section 188, between a holding company and its wholly owned subsidiary company.”

The insertion seems to provide that transactions between holding company and wholly owned subsidiaries that are entered into under section 188 (1) still require approval of the Audit Committee by virtue of omnibus or specific approval. Exemption granted for transactions between holding company and wholly owned subsidiary under Section 188 (1) does not exempt from the requirements of obtaining approval of Audit Committee under Section 177. The proposed amendment will fail to fill the gap in the provisions as compared to Listing Regulations.

Scope of approval of Audit Committee under Act, 2013 is presented below in the form of a flowchart: 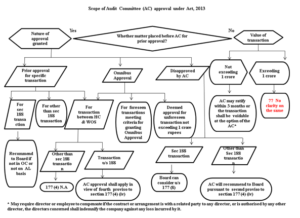 Shareholder’s approval for RPTs moves to majority of minority regime

Transactions specified under section 188 (1) (a) to (g) entered into not in the ordinary course of business and/or not on an arm’s length basis will require prior approval of shareholders in case such transactions exceed the amounts specified under Rule 15 of Companies (Meetings of Board and its Powers) Rules, 2014 as amended from time to time.

In case of shareholders approval obtained under Clause 49/ Reg. 23 of Listing Regulations, all related parties are required to abstain from voting on such resolutions. However, in case of approval obtained under section 188 it was clarified by virtue of MCA Circular no. 30 of 2014 dated 17th July, 2014 that related parties who are parties to such contracts being approved, shall abstain from voting. The proposed insertion as well the recommendation in the CLC report clarifies that the intent always was to mandate all related parties to abstain from voting. Accordingly, Bill, 2017 proposes a carve out by exempting companies in which ninety percent or more members, in numbers, are relatives of promoters or are related parties, from complying with the said requirements. The objective is to remove the difficulty faced by closely held public companies while obtaining approvals for such transactions.

The proposed amendment will lead to interesting scenarios, as discussed below: 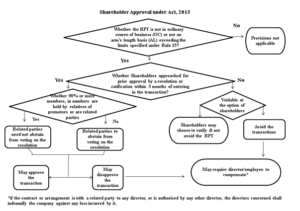 In this case, since B Ltd does not hold majority of shares in numbers, the ones holding 9% of paid up capital will decide the fate of the RPTs. If they choose to block the RPTs, there is no way to get the same approved unless the RPT is in ordinary course of business and on arm’s length basis.

Case 2 – Shareholding pattern of X Ltd comprises of Mr. Y (promoter) along with one of his relative holding 91% of paid up capital and Z Ltd (an unrelated entity) holding 9% of the paid up capital.

In the instant case, Mr. Y and his relative need not abstain from voting on the transaction as they hold majority of shares in numbers.

While numerical majority has always been considered in cases such as amalgamations and mergers, but RPTs involves a far more frequent exercise of majority wishes than a corporate restructuring. Is it worthwhile that even with over 90% shareholding strength, the majority cannot have its way? There are several situations where the minority may use this as a power of blackmail. On the contrary the ends of justice are better served by the minority giving the right to seek redressal under oppression relief provisions. After all companies have to continue to run based on shareholding majority.

However, no exemption has been provided under Section 177 for approval of Audit Committee or under section 188 (1) from obtaining approval of the Board.

Power to ratify by the Shareholders

Lastly, Bill, 2017 provides an option to the shareholders to regard such contracts or arrangement as voidable, that are entered into by a director or any other employee, without obtaining prior approval by way of a resolution under sub-section (1) or without getting the same ratified within three months from the date of entering into such contracts. The proposed amendment fills the gap that existed in case of RPTs for which prior approval or ratification was not obtained. It seemed improper to grant the power to the Board to ratify the same.

Scope of approval by shareholders has been presented below in the form of a flowchart.

Report of the Uday Kotak Committee on Corporate Governance issued on October 5, 2017 proposed following amendments in Listing Regulations in relation to RPTs:

Materiality in case of brand usage or royalty

While MCA has made a decent attempt to align the provisions of Section 188 with that of Listing Regulations, Bill 2017 does not ensure absolute alignment and leaves few gaps unfilled. In the meantime, SEBI is in the process of inching forward by imposing stricter restrictions on listed entities.

SEBI asks companies to strengthen controls on handling of UPSI Can the liquidator accept a claim after the last date for submission of cla...
Scroll to top