Listed Companies are those companies of which shares are listed on the stock exchange and certain percentage of such shareholding is available for the public to trade in with transparency and liquidity. If large portion of the shareholding of listed companies remain blocked in the hands of the promoters, subsidiary or associate company then the intent of listing such securities is breached and becomes redundant. The promoters will be at liberty to manipulate the price and the market tricking will be easy. This will also reduce the floating capacity of the securities of the company due to less liquidity.  Ministry of Finance vide press release dated June 4, 2010 has also stated that:

“A dispersed shareholding structure is essential for the sustenance of a continuous market for listed securities to provide liquidity to the investors and to discover fair prices. Further the larger the number of shareholders, the less is the scope for price manipulation.”

To prevent such abuse, sub-rule 19 of the Rules, 1957 specifies the conditions for initial and continuous listing of a company.

As per regulation 19(2)(b) of the Rules, 1957, any company proposing to list its securities shall maintain MPS as mentioned below based upon the post issued share capital of the company:

SEBI has, vide circular dated March 10, 2017, laid down criteria for Schemes of Arrangement by Listed Entities and relaxation under Rule 19 (7) of the Securities Contracts (Regulation) Rules, 1957 (SCRR). Further, to align with the rules of Rule, 1957, amendments were carried out therein through circular dated September 21, 2017.

Pursuant to aforesaid circulars, any listed issuer may for the purpose of arrangement submit a draft scheme of arrangement under sub-rule 19 of Rules, 1957 for seeking relaxation from the applicability of strict provisions of sub-rule 19(2) of Rules, 1957, for listing of its equity shares on a recognized Stock Exchange without making an initial public offer, on satisfying the conditions as mentioned in para III of Annexure I thereof. In terms of such conditions at least 25% of the post-scheme paid up share capital of the transferee entity shall comprise of shares allotted to the public shareholders in the transferor entity. However, on fulfillment of following condition, requirement to attain such MPS may be waived off:

What if MPS is less than 25% in case of continuous listing?

Pursuant to proviso of sub-rule 19A of Rules, 1957, every listed company which is not meeting the minimum public shareholding specified under sub-rule 19 of the Rules, 1957 shall in accordance with the provision of sub-rule 19A accomplish the same within the stipulated time period which is 4 year from the date of commencement of SCRA Amendment Rules, 2014 i.e. by January 15, 2018. Earlier the time specified was upto January 15, 2017 and listed companies failing to comply with the same has faced severe consequences in past. Albeit, strict steps have been taken by SEBI against such companies, public shareholding of such companies was still below the requirement. Therefore, SEBI has, once again vide circular on July 03, 2017, extended the time limit for achieving the minimum public shareholding by one year i.e. January 15, 2018. 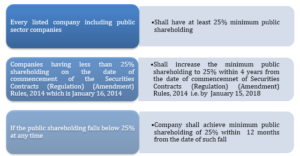 This extension of time yet again by SEBI is a clear indication of the its accommodative and perceptive regulatory approach and takes cognizance of the need for a reasonable timeframe within which non-compliant companies may take remedial action with respect to public holding requirements. SEBI has not only increased the time limit for bringing the public shareholding within specified limits but has also amended various Regulations and Acts thereof for achieving the requirement of minimum public shareholding.

Subsequently, another circular was issued by SEBI on February 08, 2012 through which listed companies were allowed to achieve minimum public shareholding through institutional placement programme. Along with the aforesaid, SEBI has also specified that listed companies desirous of achieving the minimum public shareholding may approach SEBI with the appropriate details and the same will be entertained by it on the basis of merits.

Despite aforementioned efforts of the SEBI to facilitate achieving minimum shareholding, various companies have not complied with the same. As a result SEBI has taken stern actions like freezing of voting rights, delisting of securities, exclusion of scrips from F&O segments etc.

SEBI has once again vide circular dated October 10, 2017[1], in order to bring uniformity of approach in enforcement of MPS norms and to ensure compliance with same, laid down following procedure: 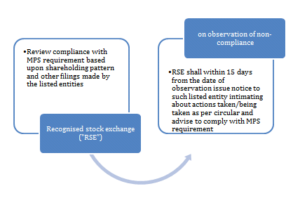 Steps to be taken by RSE on observing non-compliance

Provided that where it is observed that the listed entity has adopted a method for complying with MPS requirements which is not prescribed by SEBI under clauses (2)(i) to (vi) under SEBI circular[1] dated November 30, 2015 and approval for the same has not been obtained from SEBI under clause 2 (vii) of the said circular, the recognized stock exchanges shall refer such cases to SEBI.

Upon intimation of compliance and on being satisfied, RSE shall remove the aforementioned restriction levied on the listed entities, its promoter, promoter group and directors.

Aforementioned actions taken by SEBI are without prejudice to its power to take action under the securities laws for violation of the MPS requirements.