Blog - Latest News
You are here: Home / NBFCs / Aadhaar Ordinance – Paving way for use of voluntary Aadhaar by Private...

Supreme Court in the case of Justice K.S. Puttaswamy (Retd.) & Anr. V. Union of India, W.P. (Civil) 494/2012 dated September 26, 2018[1] (‘Aadhaar Verdict’) partially quashed section 57 of the Aadhaar Act, which dealt with use of Aadhaar by private companies or bodies corporate. Pursuant to the Aadhaar verdict, the private entities were not allowed to demand Aadhaar for establishing identity unless the same is pursuant to any law.

Consequently, it was proposed to amend the Aadhaar (Targeted Delivery of Financial and Other subsidies, Benefits and Services) Act, 2016 (‘Aadhaar Act’), Indian Telegraph Act, 1885 and the Prevention of Money Laundering Act, 2002 (‘PML Act’) in line with the Supreme Court directives. In order to ensure that personal data of Aadhaar holder remains protected against any misuse and Aadhaar scheme remains in conformity with the Constitution, the Aadhaar and Other Laws (Amendment) Ordinance, 2019[2] (Ordinance) was passed.

In this write-up we intend to discuss the outcome of the Ordinance.

Highlights of the Ordinance 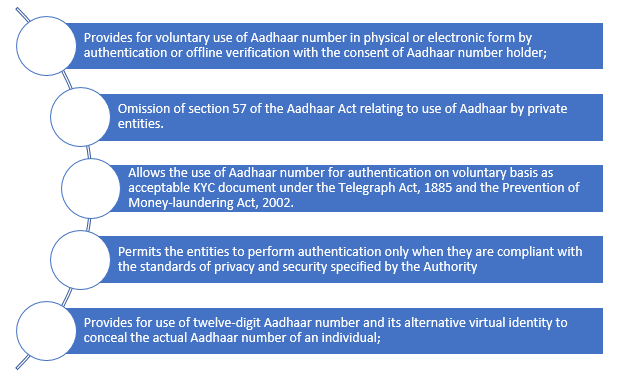 It is pertinent to note that the offline modes are not specified in the regulations. However, Unique Identification Authority of India (UIDAI) had proposed two methods of using offline Aadhaar verification –

Omission of section 57 of the Aadhaar Act

In the Aadhaar Verdict, Supreme court had struck down the last phrase in the main provision of section 57 of the Aadhaar Act., i.e. “or any contract to this effect”, which enabled fintech companies to use Aadhaar number for verifying the identity of a person for the purpose of KYC. Pursuant to this Ordinance, section 57 of the Aadhaar Act is omitted. This omission does not mean that private companies are barred from using Aadhaar to verify the identity of any customer. This ordinance has paved a way for private companies to accept Aadhaar if given voluntarily by the customers.

Amendment to the PML Act

The Ordinance provides that banking companies shall verify the identity of the customers by authentication under the Aadhaar Act or by offline verification or by use of passport or any other officially valid documents. Further distinguishing the access, the Ordinance permits only banks to authenticate identities using Aadhaar. Other reporting entities are permitted to use the offline tools for verifying the identity of customers provided they comply with the prescribed standards of privacy and security. The use of Aadhaar shall be a voluntary choice of every customer who is sought to be identified. In order to safeguard the interests of the customers, the reporting entity must inform the customer of the other alternatives available to them.