You are here: Home / Whole-time director

Demarcation of salary and fees makes the difference

The Goods and Services Tax laws (GST) introduced in 2017, also brought with itself, a concept of Reverse Charge Mechanism (RCM). GST is a tax on supply, however, under the concept of RCM, the liability to pay tax is on the recipient of supply of goods and services instead of the supplier of such goods or services.

Section 9(3) and 9(4) of the Central Goods and Services Tax Act, 2017 (CGST Act) provide two scenarios in which tax shall be chargeable on RCM basis:

The government, pursuant to section 9(3) notified that any services supplied by a director of a company to the said company shall be taxed on RCM basis.

While it is clear that as per section 7(2) and schedule III of the CGST Act keep the services provided by an employee to its employer outside the purview of GST. This raised concerns on differential treatment between services of an executive director and an employee of a company.

RCM can be understood as a method of levying GST under which the liability to pay tax is upon the recipient of services rather than on supplier. Following figure explains taxation on RCM basis: 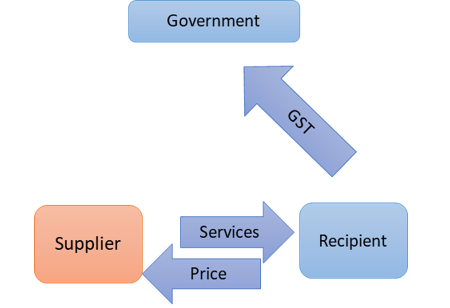 Levy of GST on Director’s Remuneration

As discussed above, the focal point of issued in GST on director’s remuneration is that GST is not chargeable on services provided by employees but is chargeable of services of directors. Hence, the key question for determination of GST liability will be determining the nature of the employment of a person.

Can director be an employee?

“Executive Director” means a whole time director as defined in clause (94) of section 2 of the Act;

Further, whole-time director is defines in the CA as-

From the above, it is clear that a director can also be an employee of a company.

Taxability on services of ‘Director + Employee’

The above discussion clarifies that a person can be both employee as well as director of a company. The question in this case will be the whether services provided by such person would be taxable under GST law? Would an executive director be treated as an employee of a company both under CA and CGST Act?

This issue was raised in the matter of Clay Craft India Private Limited[1] (‘Company’), where advance ruling was sought on whether GST would be payable on RCM basis on the salary paid to directors, given that-

The AAR, considering the above facts, provided the following observations:

Based on the above observations, the AAR held that any consideration paid to directors shall be taxable on RCM basis.

Analysis of the Ruling

The above discussed ruling failed to consider the existence of relationship of master and servant which is present in the employer-employee relationship.

Also, the AAR did not consider that the definition of whole time director under section 2(94) of the CA. The contention that director cannot be an employee does not hold good at all times.

It is pertinent to note that the outcome of an advance ruling is applicable only on the assessee who was involved in the case. However, the rulings provide guidance on the stand of revenue authorities.

Clarification issued by the CBIC

The CBIC issued a circular on June 10, 2020[3], which clearly demarcated between services provided by an independent director and a whole-time director.

Consideration for services of Independent Director

Hence, GST will be levied on his remuneration and the company shall be liable to pay the same on reverse charge basis.

Consideration for services of a Whole-time Director

The circular also clarified that the employer-employee relationship of a director in a company may be established on following grounds:

Where the above grounds are satisfied, the services provided by director in such cases shall be exempt under Schedule III of CGST Act, 2017.

However, if the remuneration is declared as any expense other than salary say professional fees, and TDS is deducted under section 192J of IT Act (Fees for professional or technical services) it shall be treated as consideration for providing service and tax on such consideration shall be paid by the company on RCM basis.

A person may provide his/her services to a company as an employee or a director or both. If the consideration paid is recorded as income from salary, the same is not chargeable under GST. If it is not shown as salary income under IT Act, GST on the same will be chargeable on RCM basis. Obviously, where part of consideration is shown as salary income and part is shown as other income, the GST shall be charged on the part other than salary.

The AAR ruling failed to recognise the principles of the CA that differentiate between executive and non-executive directors. However, the clarification issued by CBIC recognises those principles and provides guidance on taxability in both cases.