Initiation of insolvency proceedings, whether by creditors or by the debtor himself, may be compared with the Brahmastra: as the latter cannot be retracted without killing the target, the former, once admitted, cannot be withdrawn. However, after all, any insolvency resolution process is a case of a mutual contract between the creditors and the debtor – with requisite majority of creditors, it gets the seal of approval of the Adjudicating Authority and becomes a “statutory contract”. Resolution is, therefore, a consensus in substance. Isn’t it possible for the creditors to reach to a consensus with the debtor outside of the insolvency resolution process, and thus, recall the proceedings? In banking parlance, can there be a one-time-settlement (OTS) after admission of insolvency proceedings?

Section 12A was inserted specifically providing for withdrawal after admission. It is well known that the section was inserted after the Supreme Court ruling in Lokhandwala Kataria Construction Private Limited v. Nisus Finance And Investment Managers LLP, where the Apex Court had to use its plenary powers under Article 142 of the Constitution of India to permit withdrawal after admission of resolution process. The SC subsequently eased out the process of withdrawal by its ruling in Brilliant Alloys Private Limited v. Mr. S. Rajagopal & Ors.

This article intends to get into the limits, if any, of creditors’ discretion in withdrawal under Section 12A. The article reviews the law in this regard based on precedents under the winding up regime under the Companies Act, 1956, and international experience. Finally, the article tries to identify the boundaries of creditors’ wishes and the discretion of the Adjudicating Authority.

Law of Section 12A

As per Section 12A of the Insolvency and Bankruptcy Code, 2016, the Adjudicating Authority may allow the withdrawal of application admitted under Sections 7, 9 or 10, with the approval of ninety per cent. voting share of the committee of creditors. Considering that the proceedings are primarily carried on behalf of and for the benefit of stakeholders of the corporate debtor, the section stipulates two layers of consent. While it is understood that this is the sole requisite is consent of the majority of creditors, the ultimate authority to permit withdraw or not to permit vests with the Adjudicating Authority.

The Hon’ble Supreme Court in the case of Brilliant Alloys Private Limited v. Mr. S. Rajagopal & Ors. held that Section 12A contains no time stipulation and allowed the settlement, even after issue of invitation for expression of interest, thereby annulling the CIRP proceedings.

In Satyanarayan Malu v. SBM Paper Mills Ltd., NCLT Mumbai permitted withdrawal of CIRP at the stage when resolution plan was pending approval of the NCLT, after acceptance by CoC. The Bench took into account the offer of one-time settlement (OTS) made by the corporate debtor to the financial creditor, which was more economical than the resolution plan. 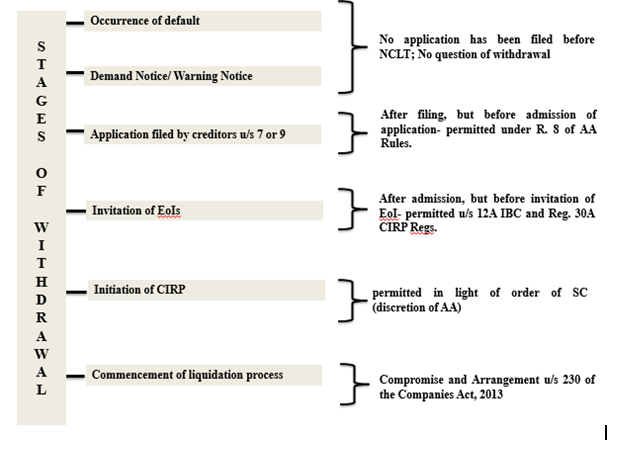 Similar provisions were contained in Section 35 of the Provincial Insolvency Act, 1920, which provides for power to annul adjudication of insolvency. Under the Companies Act, the general rule was that “wishes of the majority creditors prevail”. If the majority show confidence in the continuance of the business of the company, the court will not interfere. The law on this point is stated in Palmer’s Company Law 21st Edition, page 742, as follows:

“The right to winding up order is, however, qualified by another rule, viz., that the court will regard the wishes of the majority in value of the creditors, and if, for some good reason, they object to a winding up order, the court in its discretion may refuse the order.”

The wishes of the creditors will, however, be tested by the court on the grounds as to whether there are matters which should be inquired into and investigated if a winding up order is made. The court is invested with a wide jurisdiction, and if the facts disclose an unsatisfactory state of affairs so as to make out a strong case for investigation, the court will not hesitate to make a winding up order, inspite of the wishes of the creditors[2]. [See Madhusudan Gordhandas & co. v. Madhu Woollen Industries P. Ltd.]

Considering the facts and circumstances of the case, and in exercise of its inherent powers under Rule 9 of the Companies (Court) Rules, 1959, the courts have on several occasions allowed revival of a company even after winding up order was passed. In the case of NGEF Ltd., since attempts to revive the company by clearing the debts had failed, as per the suggestions of Board for Industrial & Financial Reconstruction, the Karnataka High Court had on 3rd August, 2004 ordered the winding up of the company. However, on 22nd June, 2017, the court recalled its 13-year-old order[3]. In the said case, while the minority shareholder claimed that there was no provision in law for recalling a wind-up order and there was no scheme placed by the state for revival; the court very clearly held that though there is no specific provision in the Companies Act for recalling of a wind-up order, the law does not restrict the court from it either, if the circumstances requiring such recall are established by any of the applicants, be it the Official Liquidator, or a creditor, or a contributory or a shareholder. The court also went on to state that revival of a company does not necessarily mean revival and restoring of the usual manufacturing or business activity. It is a broader term including therein, the best utilisation of the assets. It is only the live and operating companies or business, which contribute to the economic welfare of the country and not the process of winding up of companies, which achieves this objective of larger public good.

In Sudarsan Chits (I) Ltd v. O. Sukumaran Pillai, the Apex Court observed that it is well settled that a winding up order once made can be revoked or recalled.

Section 706(a) of US Bankruptcy Code bestows upon the debtor one-time absolute right of conversion of a liquidation case to a reorganization or individual repayment plan case. If the case has already once been converted as such, then the debtor cannot exercise the right. The policy of the provision is that the debtor should always be given the opportunity to repay his debts, and a waiver of the right to convert a case is unenforceable. Section 706(b) permits the court, on request of a party in interest and after notice and a hearing, to convert the case to one under reorganisation at any time. The decision whether to convert is left on the sound discretion of the court, based on what will most inure to the benefit of all parties in interest. For instance, in Re Wallace, 191 B.R. 925, 927 (Bankr. M.D.Fla. 1995), the bankruptcy court has taken due cognizance to the fact that conversion of a bankruptcy case to one under reorganisation would be a futile, where there exits circumstance that will cause reconversion to bankruptcy.

Section 261 of the UK Insolvency Act, 1986 also stipulates that a debtor can make a proposal for voluntary arrangement, and if creditors approve the voluntary arrangement, the bankruptcy order may be annulled by the court. As to all matters relating to the winding up of a company, the court will give effect to the wishes of the majority[4] (Section 195). Section 282 further provides for court’s power to annul bankruptcy order. The considerations for annulling the order is provided under Section 282(1) of the Act. The relevant extract is reproduced below for reference:

that, on any grounds existing at the time the order was made, the order ought not to have been made..”

on plain reading of the provision, it may be stated that the court retains a discretion whether to annul the adjudication or not, for Section 282(1) merely mentions that the court “may” annul the bankruptcy order under the circumstances described[5]. Thus, a bankrupt may still be denied an annulment if his conduct has been in some way improper [Refer In Taylor, Re (1901) 1 QB 744 (DC)].

Discretion of the Adjudicating Authority:

In case where no resolution plan has been received or the resolution plan is not approved before the expiry of the insolvency resolution process period or the maximum period permitted for completion of the corporate insolvency resolution process, the Adjudicating Authority shall pass an order for liquidation of the corporate debtor, in terms of Section 33 of the Code. As against the mandatory provisions of Section 33, Section 12A is not an automatic remedy. If the debtor files an OTS scheme, the creditors may consider the same. However, the ultimate authority to approve withdrawal of CIRP vests with the Adjudicating Authority, and the power should be exercised, considering commercial as well as social interest.

The Adjudicating Authority has adequate powers to deal with illegal activity or abusive conduct. The considerations for permitting withdrawal may be nature of OTS, in terms of fundamental requirements. The provisions of the Code should not be misused by any stakeholder to strip asset value or otherwise work to the detriment of the business or other stakeholders. The intent of IBC was to provide a reasonable opportunity for rehabilitation of a business before a decision is taken to liquidate and the Adjudicating Authority may allow withdrawal if the pre-conditions are met, however, Section 12A should not provide the debtor with an opportunity to abuse the process of law. The Adjudicating Authority should, therefore, have relevant information about the debtor for effective consideration of withdrawal. If required, the Tribunal may obtain independent comment and analysis of that information by experts.

Can Section 12A be used as the surrogate to enable what is not possible under Section 29A? It may be noted that Section 29A is ineligibility to submit resolution plan by promoters. Section 12A is not a resolution plan- Section 12A hits at the very roots of the initiation of the process itself. However, if in guise of withdrawal of CIRP, the creditors are actually agreeing to a resolution plan, then the Adjudicating Authority may exercise discretion. The idea of withdrawal under Section 12A is akin to a declaration by overwhelming majority of creditors that the circumstance which led to initiation of insolvency do not exist anymore. If the facts are that the entity is intrinsically insolvent, the idea of Section 12A cannot be perpetuation of insolvent business. Section 12A should not be allowed to become a re-run of the process under BIFR or earlier regime where an insolvent business could continue to run without any hard time lines. The IBC regime does not want deadwood to continue to lock economic resources, and unsuccessful/unscrupulous promoters to continue to manage businesses. Hence, if the circumstances that led to initiation of insolvency continue to prevail, the Adjudicating Authority will be justified in using its discretion to refuse to allow withdrawal.

Brand usage and royalty payments get a new dimension under Listing Regulati... Entity versus Enterprise: Dealing with Insolvency of Corporate Groups
Scroll to top