You are here: Home / Listing regulations

It has always been interesting to see how SEBI takes various steps to increase the level of transparency for augmenting the level of corporate governance in a listed company. Recently, SEBI notified the changes under the SEBI Listing Regulations on 6th May, 2021, which contained several significant changes to enhance corporate governance (hereinafter referred to as CG), like specifying the scope of the risk management committee or intimation of recordings and transcripts for analyst meetings[1]. Following the said notification, SEBI, on 31st May, 2021, came up with a circular[2] dealing with enhanced disclosures under CG report to be submitted to the stock exchange under Regulation 27 (2) of the SEBI Listing Regulations by adding Annexure IV to the existing formats.

The new requirement coming out from this circular is extremely significant since it aims at revealing almost all types of financial transactions (to say almost 24 types of permutations) which the company has entered into with its close connections and which may have the highest chances of involving any conflict of interest. 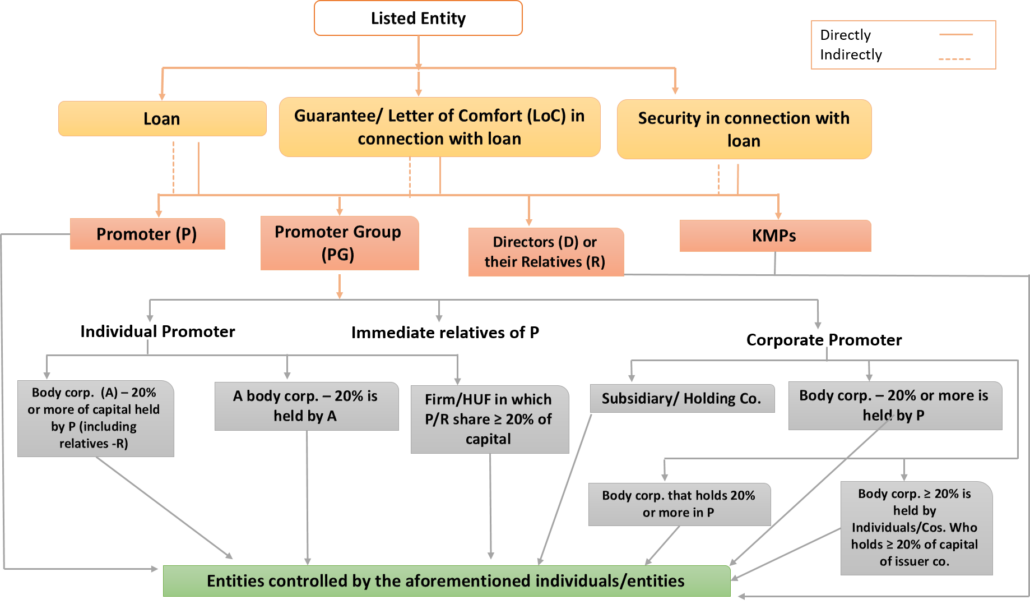 In this write up we have tried to critically discuss and examine the requirements emanating from the said circular.

Scope and time of applicability

While the format under the new annexure may seem to be simple in terms of presentation, however, it has various aspects related to it which needs to be discussed. Owing to the extent of disclosure required, listed companies will have to consider and understand every part under the format before feeding the details. Some points which need to be discussed include the actionable, the meaning of the entities controlled by the promoters, the meaning of direct and indirect accommodation, distinction between a LoC and a co-borrowing arrangement, and last but not the least the ‘affirmation’ on the economic interest of the company.

Actionable on the part of the listed entity

While the meaning of the term promoter and PG is well defined under SEBI ICDR Regulations, the question that may arise is which entities will be considered to be controlled by the promoters or the PG. The meaning of control here has to be taken form SEBI Takeover Regulations, which defines it as a right to appoint majority of the directors or to control the management or policy decisions exercisable by a person or PAC, directly or indirectly, including by virtue of their shareholding or management rights or shareholders agreements or voting agreements or in any other manner.

As per the format of annexure IV, any other form of debt advanced is also required to be included for the purpose of the said disclosure. Looking at the intent of the disclosure, any book debt that is present in the books like merely selling of goods on credit should not be made part of this disclosure. In our view, only the book debt which has the color of an advance and which is in the nature to serve as a financial accommodation (for example selling of goods on credit for an unreasonable period of time or under unreasonable terms of understanding) is required to be disclosed.

As per the requirement, one of the biggest challenges for the listed entities will be to identify the connecting links or conduits through which these interested entities have been benefitted. Such transactions are generally camouflaged and put through layers to create smokescreen. These entities which are used to route the benefits to the interested parties are merely acting as a stopover. Therefore, it is extremely important to identify such transactions where there is a clear and direct nexus between flow of money from the listed entity to the intermediary and ultimately to the interested party. For instance, if a company raises preference share capital with the reason that it needs it for its own business operations, however, uses the funds so raised to on lend to another entity.

Difference between LoC and co-borrowing arrangement

The new requirement includes an LoC to be disclosed in the half yearly report. One needs to understand that providing a guarantee or giving an LoC by the listed company is nothing but to agree and provide financial accommodation to the borrower. It is significant to note that companies cannot disguise the LoC into a co-borrowing arrangement and therefore, avoid the disclosures to be made under Annexure IV.

Under a co-borrowing arrangement, if the listed entity is the co-borrower, then it should be getting the benefit or be a beneficiary of the loan being taken together with the interested party. Acting merely as a signatory to the co-borrowing agreement will make it no different from being considered as a guarantee or providing an LoC.

Affirmation for being in economic interest of listed company

One of most crucial and difficult part of the disclosure is the part requiring affirmation that loan (or other form of debt), guarantee / comfort letter (by whatever name called) or security provided in connection with any loan or any other form of debt is in the economic interest of the Company.

Some pointed issues under this are:

Further, the practicing professionals who provide their report on compliance with CG requirements and which has to be annexed with the CG report cannot be expected to dive into this question and scrutinize the reasoning provided by the company.

Further, it is imperative to note that the entities covered under this disclosure are mainly upstream entities which are either promoters or PG or controlled entities by them. Therefore, it becomes all the more difficult to justify the act of financial accommodation to be in the economic interest of the company. If it were a case of downstream accommodation (like subsidiaries, associates, joint ventures, etc.), it would have been much easier to form a basis to affirm that the same is serving the economic interest of the company since any profits in them will reflect in the consolidated financial results of the listed entity, however, the same reason cannot be for an upstream entity.

Also, merely earning an interest on loan granted or a commission on a guarantee or security or even on lending cannot act as a justification here since the earning interest or commission cannot be said to serve the economic interest of a company which is not even in the business of lending. Having said that listed NBFCs may have an upper hand in terms of providing justifications in this case.

• Whether the same needs to be reviewed by the Audit Committee as well?

Regulation 18 of the Listing Regulations read with Part C of Schedule II as well as section 177 of the Companies Act requires that the audit committee needs to scrutinize the inter-corporate loans and investments. While the same is required and covers loans, there does not seem to be any reason to exclude provision of security or extending guarantee since it is given in connection with loan.
The management needs to show the audit committee how does the transactions covered for the purpose of the said disclosure are in the economic interest of the Company.

Comparison between section 185 of the Companies Act, 2013 and Annexure IV

Section 185 of the Companies Act, 2013 (Act, 2013) deals with the provisions to provide loan and related services to directors or the interested entities. While section 185 is more from an angle of regulated provisions, the extent of casting restrictions on providing loan to directors or its connected parties is divided into two parts. One is completely prohibited (to directors and to firms where the director or his relative is partner) and the other one is restrictive, which means, financial accommodation can be given subject to prior approval of the shareholders.

The new disclosure requirement has several similarities with section 185 which are given below:

While the format requires the financial accommodation made, if any, to the directors or their relatives or entities controlled by them, it will surely not include or have any disclosure relating to financing of directors since it is completely prohibited under section 185 of the Act, 2013.

While one of the exclusions is for a banking company, it is imperative note the following:
 SEBI (LODR) Regulation does not define the term “banking company” but the term “banks”.
 Section 5(c) of the Banking Regulation Act, 1949 (‘BR Act’) defines banking company as: “banking company” means any company which transacts the business of banking in India;”
 Further, section 5(d) of the BR Act defines company as: “company” means any company as defined in section 3 of the Companies Act, 1956 (1 of 1956) and includes a foreign company within the meaning of section 591 of that Act;”
 Public sector banks like State Bank of India, being a body corporate, do not fall under the aforesaid definition of banking company. However, it is engaged in the business of banking and should therefore, be excluded.

Accordingly, clarity on the same is still awaited from SEBI.

As stated in the beginning, SEBI’s move to increase the standards for CG has been extremely interesting. Further, considering the fact that listed companies have a limited amount of time to arrange for huge amount of information, this circular needs the immediate attention of the listed entities.

[1] Our write up on the same can be viewed here

The Securities and Exchange Board of India (SEBI) has issued an Advisory on 20th May, 2020[1] for listed entities  advising them to evaluate the impact of the COVID 19 pandemic on their business and disseminate the same to stock exchanges.