You are here: Home / Securitisation

Covered Bonds are seen as an effective alternative to securitisation and the world seems to be all promoting the instrument by making necessary regulatory amendments or devising new enactments[1].

Canada too is set to follow the trend globally. Canada Housing and Mortgage Corporation (CMHC), the country's national housing agency has announced the details of the legal framework for Canadian covered bonds[2].

The National Housing Act (the Act) in Canada is the legislation governing the construction of new houses, the repair and modernization of existing houses, and the improvement of housing and living conditions. As part of the 2012 Federal Budget[3], amendments were made to the National Housing Act charging CMHC with administering a legal framework for covered bonds. The provisions relevant to covered bonds are contained inPart I.1 Section 21.5-21.66 of the Act.

The important provisions are:

CMHC feels that the framework will support financial stability by helping lenders diversify their sources of funding and attract more investors from off shore markets as well.

The issuers of covered bonds will have access to an alternative source of funding and will gain a broader investor base since some international investors are restricted from purchasing bonds issued under a non-legislative framework. For the investors, the benefits come in the form of high standards of disclosure in tune with international best practices; statutory protection, dual recourse to the issuer as well as the cover pool. The ultimate beneficiary will be the market.

CMHC has issued a Covered Bonds Guide for easy understanding of the framework.

The step by the Canadian Regulators comes as an incentive to boost the global covered bonds market, where financial regulators of some countries like Norway are seeing covered bonds as risk accelerators for banks[4].

[1] As for example, in India, recently a Working Group constituted by National Housing Bank, the apex housing agency, submitted its Report that suggests a unique structure for introducing covered bonds in India: the NHB-intermediated structure. The Working Group report can be viewed herehttp://vinodkothari.com/CB%20news/covered%20bonds%20with%20NHB%20Intermediation%20coming.htm.

Vinod Kothari was a member of the Group, also see Covered Bonds with NHB intermediation coming, by Vinod Kothari.

Monetary Authority of Singapore (MAS) came out with a consultation paper on guidelines for issue of covered bonds by the banks of Singapore. The paper titled "Covered Bonds Issuance by Banks Incorporated in Singapore" was issued in March last year. Since then the paper was put up for public and industry comments for almost a year.

DBS bank is already preparing and pressing for structural reforms to issue covered bonds once the regulations are approved and are in line. DBS working closely with Deutsche Bank and Barclays are all set to be the first to issue the first covered bonds of Singapore. DBS is likely to face tough competition from the Australian banks which are pricing their covered bonds at a cheaper rate. Thus, penetrating the market with a tight pricing policy seems to the primary objective of DBS. The currency denomination is yet to be determined for the issue. Europe is speculated to be the favorable buyers of the covered bonds with their vast experience in this area and familiarity of the structure.

Singapore banks are eagerly waiting for the final guidelines to be approved. Due to their little experience in securitisation, structural standardization of the loans to be used as collaterals need to paid heed with a constant supervision.

The world witnessed a steep fall in the issuance of covered bonds during the last year. The main reason behind this is assumed to be the consumer behavior- which in due course had resorted to cheaper liquidity available from the central banks. However, international rating agency Standard & Poor's (S&P) opines that lower issuance costs and a host of maturing bonds in 2013 will keep the volume of covered bonds at par. Based on their analysis, Standard & Poor's came out with a report on covered bond's performance captioned "Covered Bonds face another tough year" on January 24, 2013.

The report consists an overview and a critical analysis about the performance of covered bonds last year along with the predictions of 2013. S&P evaluated and analyzed the following pointers:

Covered bond issuance started well in the beginning of 2012, with transaction volumes already exceeding Euro40 billion[1]. But increasing funding pressures forced the banking regulatory bodies to press for better legislations for covered bonds as a secure source. In this mounting pressure many have continued working on (e.g., the U.S. and Belgium) or finally implemented (e.g., Australia) new covered bond laws in 2011. However, from the short-term viewpoint, due to the euro-zone fallout risks started creeping up and brought 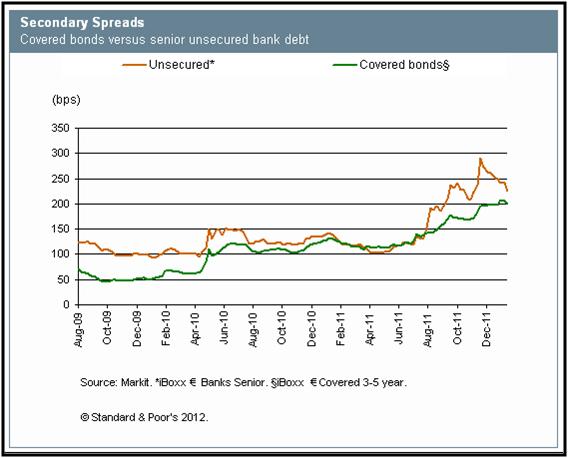 S&P published a special report titled "Global Demand for Covered Bonds is Growing" wherein it stated that 2011 symbolized enough dynamism for the covered bonds market. Global issuance touched about 300 billion Euros with a very diverse set of issuers. Unfortunately, this acceleration was somehow hindered and the global turnout stated declining in 2012. An immense stress in credit markets in the second half of 2012 stalled new issues. Better and diversified options available to the investors from banks have changed the course of this asset backed security to a large extent but the market players are hopeful that the situation will be soon restored.

The Fall of Covered Bonds in the US

Covered bonds being widely perceived as the alternative on-balance sheet option for RMBS, several countries have sought legislation to regulate covered bond issuances.[2] In response to mortgage market turmoil in 2007 and 2008, the Treasury Department and the Federal Deposit Insurance Corporation (FDIC) considered rulemaking to encourage the use of covered bonds as an alternative to mortgage securitization.[3] However, the Federal Reserve Board (FRB) and Federal Deposit Insurance Corporation (FDIC) have yet to recognize covered bonds as a valid source of bank capital. Legislation on covered bonds does not exist as of now, although efforts have been underway for over three years.

Presently, covered bonds are issued under the Securities and Exchange Commission (SEC) 144(a) Private Placement Rules or under Rule 3(a) 2 provisions. This has limited the number of prospective buyers and made covered bonds less attractive for issuers who are seeking large number of bidders to lower their financing costs. This slump is mainly the result of lack of interest by large US banks in the absence of regulation. Since Federal Housing Administration insurance is easily available and there is heavy participation of GSEs in the housing market, there seems to be little incentive for banks to float a market for covered bonds. It is also possible that some banks may not have sufficient collaterals.

The slump in the market was experienced outside the US as well. In Europe also, the recent efforts at reduction of bank’s balance sheets and cheap liquidity available from central banks have caused the demand for funding to slump.[4] Globally, issuances stand at $130 bn, which has decreased by 40 % year on year. Issuances of unsecured bonds have also decreased by 2%. [5]

Data  presented  at  the  European  Banking  Authority's  public  hearing  this  week  has boosted  the  outlook  for  covered  bonds  in  the  continent.  The  regulator  released  its findings at a public hearing on liquidity in London, where it also summarised responses to a discussion pap er on defining liquid assets released in February and its views on the feedback. The EBA is charged with advising the European Commission, by 31 December 2013, on the determination of “extremely high” and “high” quality liquid assets (HQLA) for  LCRs under  the Capital Requirements Regulation (CRR),  corresponding to  Level 1 and Level 2 assets under Basel III, respectively. [ 1]

The  EBA's  findings  may  pave  the  way  for  covered  bonds  to  be  counted  among  the highest rank of assets  –  Level 1  –  in a bank's liquidity  coverage ratio, meaning they do not face haircut in the  calculation of a bank's  LCR. [ 2] EBA’s data is gathered  from 9 million trades, 13,000 bonds, 1 million observations and 844  distinct equities. The EBA rated government bonds, covered bonds, non -financial corporate bonds, ABS (including RMBS)  and  equities  on  8  distinct  criteria,  including  pricing  impact,  trading  volume, turnover  ratio,  and  30 -day  price.  The  scale  was  from  1  to  5 ,  with  1  being  the  highest score and 5 the lowest. Both covered bonds and government bonds scored an average of two, whereas ABS finished in fifth place with 4.38. [ 3]

The EBA held that the results were preliminary and subject to change before it publishes a report on liquidity ratios and HQLAs at the end of the year.

However in the US, the Fed has  opposite views. According to the Fed, covered bonds do not deserve a place within Level 1 assets. It published a paper on the implementation of LCR  requirements.  It  will  keep  covered  bonds  at  a  ranking  below  sovereign  paper,
holding the view that they are insufficiently liquid and hence not marketable. [ 4]