Section 236 of the Companies Act, 2013 (‘Act, 2013’) sets out a process of squeezing out minority shareholder whereby any shareholder of the company, either alone or along with person acting in concert, holding 90% or more of the total issued equity share capital, may acquire the remaining equity shares of the company by giving an offer to the minority shareholders. This “Rule of Majority” principle was recognized in a landmark case Foss v. Harbottle, where it was held that that the minority shareholders are bound by the decision of the majority shareholders and the Courts do not interfere in the internal matters of the Company. However, the powers of majority should be exercised in reasonable manner which do not result into oppression of minority. Thus, the inherent protection under the law is that the acquisition shall take place at a fair value or higher value as determined by the valuer in accordance with Rule 27 of the (Compromise, Arrangements and Amalgamation) Rules, 2016 (‘CAA Rules, 2016’).

The section 236 was incorporated under the Act, 2013 on the recommendation of the Dr. J.J. Irani Committee Report on Company Law, 2005[1] for the reason reproduced below:

“The law should enable companies to purchase the stake of minority shareholders in order to prevent exploitation of such shareholders where a promoter has bought back more than 90% of the equity. Such purchase should, however, on the basis of a fair offer. Appropriate valuation rules for this purpose should be prescribed, or, the last known price prior to delisting, could be made the benchmark for such acquisitions.”

Fair value of the shares of the Company whose shares are being transferred in accordance with Rule 27 (Compromise, Arrangements and Amalgamation) Rules, 2016.

Fair value of the shares of the company to be offered to the minority shareholders shall be calculated by a registered valuer in accordance with Rule 27 of the CAA Rules, 2016 which provides for evaluation criteria for listed companies as well as unlisted companies.

The company whose shares are being transferred to the acquirer, shall act as a transfer agent for receiving and paying the price to the minority shareholders and for taking delivery of the shares and delivering such shares to the majority.

The offer letter received from the acquirer will be dispatched to the shareholders along with the consideration.

Minority shareholders shall on receipt of offer letter, provide for physical delivery of their shares to the company within the offer period.

In the absence of a physical delivery of shares by the shareholders within the time specified by the company, such shares shall be taken as cancelled and the transferor company shall be authorized to issue shares in lieu of the cancelled shares and complete the transfer by following the applicable transfer provision and dispatching the amount paid by the acquirer in advance.

In order to ensure smooth implementation of acquisition of minority shareholding, the Act, 2013 empowers the company whose shares are being transferred to issue new shares in lieu of the undelivered shares within the time specified.

While in case of shares held in physical form, section 236(6) of the Act, 2013 is clear to state that share certificates shall deemed to be cancelled for non-receipt of physical delivery of shares and the company is authorized to issue new shares in lieu of cancelled share certificates, however, there is a difficulty in implementing the same in case of shares held in dematerialized form.

The company shall within 2 weeks from the date of receipt of the amount equal to the price of shares to be acquired by the acquirer, verify the details of the minority shareholders holding shares in dematerialised form.

The company shall send notice to minority shareholders by registered post or by speed post or by courier or by email informing about a cut-off date on which the shares of minority shareholders shall be debited from their account and credited to the designated demat account of the company, unless the shares are credited in the account of the acquirer, as specified in such notice, before the cut-off date.

A copy of the notice served to the minority shareholders shall also be published simultaneously in two widely circulated newspapers (one in English and one in vernacular language) in the district in which the registered office of the company is situated and also be uploaded on the website of the company, if any.

Immediately after newspaper publication of notice, the company shall inform the depository w.r.t cut-off date and submit the following declarations stating that:

For the purposes of effecting transfer of shares through corporate action, the Board of Directors of the company shall authorise the Company Secretary, or in his absence any other person, to inform the depository and to submit the documents as may be required.

Note: In case a specific order of Court or Tribunal, or statutory authority restraining any transfer of such shares and payment of dividend, or where such shares are pledged or hypothecated under the provisions of the Depositories Act, 1996, the depository shall not transfer the shares of the minority shareholders to the designated demat account of the company.

Note: The company shall continue to disburse payment to the entitled shareholders, where disbursement could not be made within the specified time, and transfer the shares to the demat account of acquirer after such disbursement.

A pictorial presentation giving step-by-step procedure to the above requirements is summarized below: 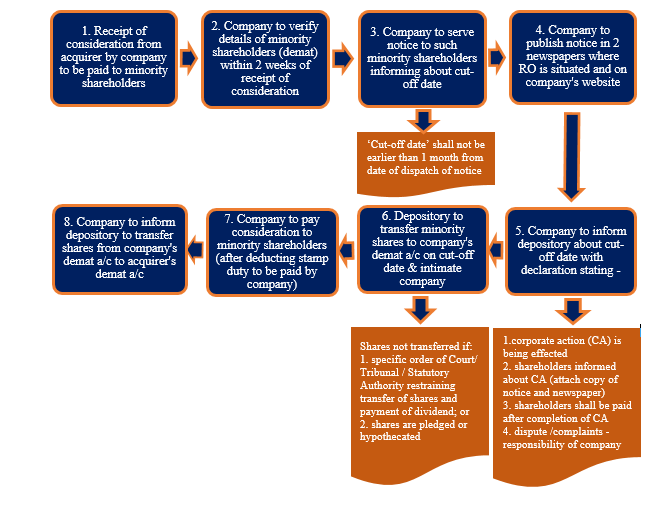 Other reading materials on the similar topic: