You are here: Home / AGM

In the present scenario, it is difficult to conduct physical AGM. Considering the disruption caused due to COVID-19, the Ministry of Corporate Affairs vide its circular dated 5th May, 2020 allowed companies to hold AGM through video conferencing.

We have put up this page to provide the access to all relevant resources on the subject at one place, along with our analysis. Hope that the readers find it useful.

Presentation on General Extension for holding AGM for FY 2019-2020 by Ms. Pammy Jaiswal

Checklist for AGM by VC for Companies providing e-voting facility

Convening of AGM during COVID-19 crises

-Will VC mode motivate the companies to call the AGM early?

In view of the COVID-19 outbreak, the Ministry of Corporate Affairs (‘MCA’) had come up with the circular dated April 08, 2020[1] providing certain relaxations from the provisions of Companies Act, 2013 (‘Act’) and rules made thereunder including conducting the extra-ordinary general meeting (‘EGM’ or ‘Meeting’) for passing the resolutions of urgent nature through video conferencing (‘VC’) and other audio visual means (‘OAVM’) till June 30, 2020. Further, in order to provide more clarity on the modalities to be followed by the companies for conducting EGM viz. manner of issuance of notice, voting by show of hands and postal ballot etc., another circular dated April 13, 2020[2] (Collectively referred to as ‘EGM Circulars’) was brought in force. In continuation to the aforesaid circulars and in view of the social distancing norms and other restrictions thereof, MCA provided an extension of 3 months for holding annual general meeting (‘AGM’) for the companies having the calendar year as the financial year vide its circular dated April 21, 2020[3].

Now, considering the representations of various stakeholders, MCA has issued a circular dated May 05, 2020 [4](‘AGM Circular’) in line with the relaxations provided under the EGM Circulars to hold AGMs through VC/ OAVM.

While the AGM Circular will draw its reference from the EGM Circulars in terms of the modalities, however, there are various issues worth discussing to understand the scope, impact and applicability for companies to call AGM during the COVID-19 crisis. This write-up focuses on some of the issues and also provides the comparison between both the EGM Circulars and AGM Circular.

Para B (I) of the AGM circular provides that such companies can conduct their AGM through VC or OAVM only if the company has in its record, the email-ids of at least half of its total number of members, who –

While the AGM Circular provides three classes of companies, most of the companies fall under the second class where two types of majority has been mentioned. The following flow chart represents the manner in which such classes of companies, as a pre-requisite will need to have the email-ids registered with themselves: 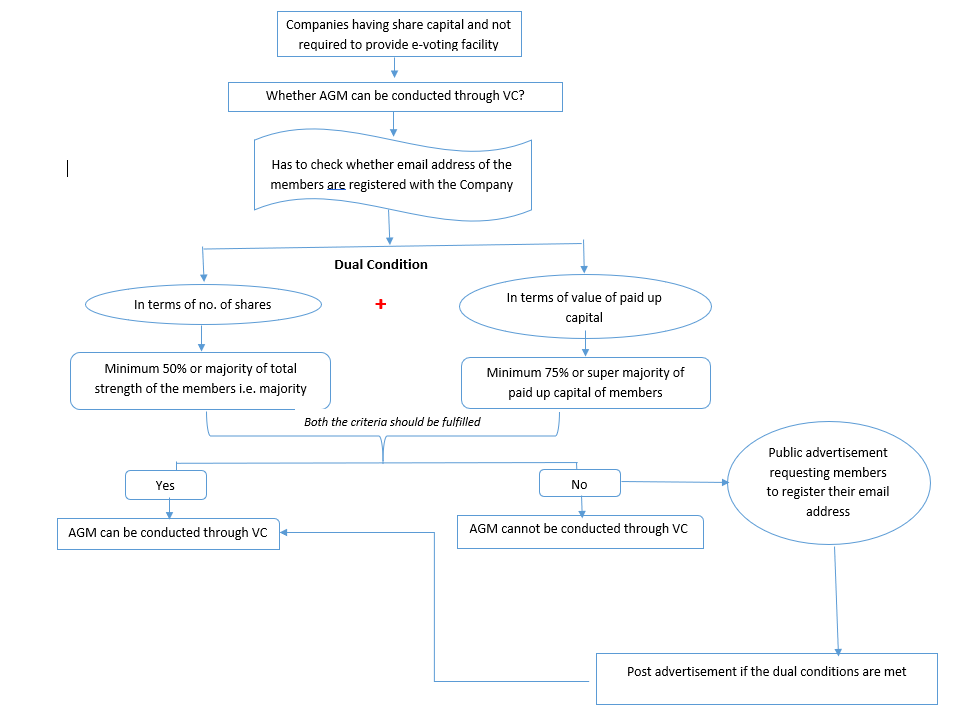 Further, while this AGM Circular is applicable on companies, other entities like public sector banks will not be covered under this circular. Seemingly, SEBI will have to provide some sort of similar relaxation to such entities.

Furthermore, while the AGM circular comes with the time frame to avail the AGM Circular within the calendar year 2020, however, considering the fact that there would be movement restrictions even after the lockdown is lifted, therefore, this added feature, seems to be of a permanent nature for the times to come under Indian legislation. Also, many countries like US and UK already allow this facility and other countries like Hong Kong, Austria, Belgium, Germany and Italy, etc. have started giving this facility post the outbreak of COVID-19.

After the enforcement of the AGM Circular, the companies will be motivated to convene the AGM through VC/OAVM mode. The reasons for such a motivations are many, some of them are as follows:

While there are many reasons to conduct the AGM through VC/OAVM mode, the only difficulty seems to be is the completion and audit of the annual accounts. Once the audit is done, the companies may proceed for convening the AGM through this mode.

Will Companies want to convene their AGM early?

This question in our view, should be in affirmative for various reasons as given below:

AGM Circular to cover both ‘Ordinary Business’ and ‘Special Business’

Para A(II) and B(IV) of the AGM Circular provides the type of business which will be transacted in the AGM through VC/OAVM. The text of the same is provided below:

“In such meetings, other than ordinary business, only those items of special business, which are considered to be unavoidable by the Board, may be transacted.”

Further, for items requiring right of representation like removal of auditors or directors, etc. cannot be conducted through VC/OAVM as mentioned under EGM Circular.

Meaning of the term ‘Unavoidable’

Both the AGM as well as the EGM Circulars use the term ‘unavoidable’ business matters. The term ‘unavoidable’ means something which cannot be deferred and should not be deferred. If a company is calling and conducting its AGM, there is no reason for the company to unnecessarily defer any item of business and call a separate meeting to deal with them. Therefore, no company would ideally call a separate meeting to decide on matters just because they were not requiring immediate action during the said year. Accordingly, based on the reason of exigency or business urgency, etc., the Board of the company has to decide on the matters which are unavoidable.

Comparison of the Circulars

A meeting of the shareholders’ which is required to be convened by the companies on an annual basis, on account of a statutory requirement is called as AGM. Whereas an EGM is required to be convened by a company when the approval of the shareholders’ is required on urgent matters. The AGM Circular provides that the framework and manner of issuing notices provided in the EGM Circulars shall be applicable mutatis mutandis for conducting the AGM. While both the meetings are of the shareholders only, however called and conducted with different mindset altogether. Accordingly, it is imperative to see the implications of the provisions of EGM Circulars on the AGM. A brief comparison of both circulars is provided below:

Additional requirements to be complied with by the companies which are required to provide the e-voting facility:

Additional requirements to be complied with by the companies which are not required to provide the e-voting facility:

Application for extension of AGM for certain companies

The companies which do not have calendar year as their financial year and are unable to conduct their AGM in accordance with the framework provided in AGM Circular may apply for the application for extension of AGM before the concerned Registrar of Companies under section 96 the Act.

Many companies which have already approved their AGM notices will have to make suitable changes therein in line with the said circular. Further, post the issue of this AGM Circular, most of the companies will be making their debut in conducting the AGM through VC/ OAVM and it will be interesting to see smooth convening amidst the crisis.

Implicit deferral of concomitant actions with IEPF amidst COVID-19?

While currently the world is suffering due to the pandemic COVID-19, our regulatory authorities have been continuously providing reliefs/ relaxations to all corporate houses from making various compliances required under the statutory laws. While some of the major relaxations such as conducting extraordinary general meeting of shareholders through VC, making contribution to PM-CARES Fund as a notified CSR expenditure or making compliances under Listing Regulations have already been notified, MCA has come up with yet another Circular[1] granting relaxation from holding AGMs to such companies that follows calendar year as their financial year.

Can there be a different financial year apart from April-March?

Provided that where a company or body corporate, which is a holding company or a subsidiary or associate company of a company incorporated outside India and is required to follow a different financial year for consolidation of its accounts outside India, the Central Government may, on an application made by that company or body corporate in such form and manner as may be prescribed, allow any period as its financial year, whether or not that period is a year:”

There are corporate groups where the structure of shareholding is such, that the holding company is situated outside India and is having Indian subsidiaries. The provisions of law provide that where the relationship between the group is such, that it requires the Indian company to follow a different financial year for the purpose of consolidation of its accounts with the accounts of the company situated outside India, such Indian company can have a different financial year. However, such company needs to apply to the Tribunal for the same.

What is the timeline for holding AGMs?

Are there such companies following a different financial year? 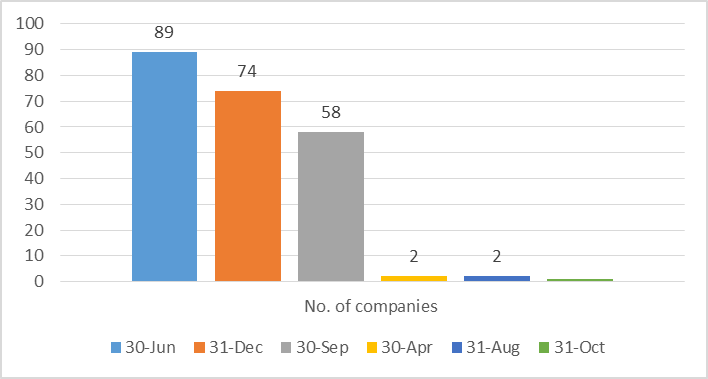 What is the relaxation?

Currently, only companies that follows calendar year as financial year have been granted a 3-months relaxation from holding their AGMs i.e. such companies are allowed to hold their AGMs till 30th September, 2020 instead of June, 2020. Further, the due dates of all other related compliances such as filing of annual returns or financial statements which are required to be done within 60 days/ 30 days as applicable shall be construed accordingly.

What if the company is a listed entity?

Regulation 44(5) of the SEBI (LODR) Regulations, 2015 provides that where the listed entity is within top 100 listed entities based on market capitalization, they have to hold their AGM within 5 months from the closure of the financial year i.e. by August 31, 2020. However, considering the present situation and the need for social distancing, conducting AGMs within such time was becoming a challenge for large corporates. Keeping this in mind, SEBI has granted relief to such entities by extending the requirement by 1 month i.e. till September 30, 2020. However, there was no clarity on what if such entity is a listed entity and follows calendar year as their financial year and is among the top 100 listed entities.

SEBI has now also clarified the same vide its Circular[3] dated 23rd April, 2020 and the present timeline may be summarized as follows:

Therefore, all types of companies can conduct their AGMs till 30th September, 2020.

Our other articles on related subject may be found here.