The Ordinanceis the second ordinance in respect of this legislation; which, among several other amendments, seeks to provide first-aid for the burns given by the first ordinance passed 6 months ago in November, 2017 [later enacted as IBC (Amendment) Act, 2018, with modifications] in the form of section 29A. END_OF_DOCUMENT_TOKEN_TO_BE_REPLACED

The Insolvency and Bankruptcy Code (“the Code”) provides for resolution of corporate debtors and then liquidation, where the insolvency proceedings fail. Liquidation of a company entails settlement of claims of creditors in the staking order of their priorities. Hence, the task of collection, collation, verification, admission and rejection of claims by the liquidator constitutes a major function in the liquidation process. The function becomes all the more crucial when the company under liquidation is an insolvent entity. The competing stakeholders put their claims on insufficient assets. The laws regulating liquidation generally mandate the stakeholders to furnish their claims within a specified time limit. However, it might be possible in several cases that a creditor fails to furnish his proof of debt within the time so stipulated. Issues generally do not arise when there had been no distributions before the filing of proof by the creditor. Concerns would be there when a distribution had already been made. Also, the issue does not come up during resolution process, since the proofs are invited for the purpose of determining eligibility as a member of the committee of creditors and voting in meetings thereof[1]. END_OF_DOCUMENT_TOKEN_TO_BE_REPLACED

To curb the illicit ways, several amendments were made in the Code, first by way of Insolvency and Bankruptcy Code (Amendment) Ordinance, 2017[1] dated 23rd November, 2017, then by Insolvency and Bankruptcy Code (Amendment) Act, 2018[2] dated 19th January, 2018 (“Amendment Act”). Of all the amendments, the one which has become a riddle for all is section 29A. The section specifies persons not eligible to be resolution applicant, and has ten parts (i.e. clauses), the tenth part is further divided into three sub-parts, of which the third part has its own descendants. These layers of section 29A are more in the nature of elimination rounds. The write-up below digs deeper into the section.

Resolution Applicant – Who and Who Not?

Vide the Amendment Act, the definition of “resolution applicant” was amended so as to mean a person, who individually or jointly, submits a resolution plan to the resolution professional pursuant to the invitation made under section 25(2)(h).

Section 29A is a restrictive provision- any person falling in the negative list is not eligible to submit a resolution plan.

Therefore, a person in order to be eligible to submit a resolution plan –

Section 29A – A Pandora Box

Major aspects of the provision have been analysed as below-

An assiduous analysis of Section 29A reveals that the section imposes four layers of ineligibility, as mentioned below- 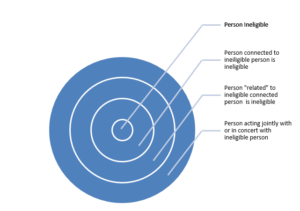 At least a period of 1 (One) year should have elapsed from the date of classification till the insolvency commencement date. Therefore, any company (including the promoters/persons in the management of or control of such company) which has its account classified as NPA for last 1 (One) year will not be able to file a resolution plan however, the Code provides for a carve out that such person shall be eligible to submit the resolution plan if such person makes payment of all overdue amounts with interest thereon and charges relating to non-performing asset accounts before submission of resolution plan. See also, clause (j) of Section 29A.

The provision came up for discussion in RBL Bank Ltd. v. MBL Infrastructures Ltd. [CA(IB) No. 543/KB/2017; order dated 18.12.2017], where NCLT took a view that there was no intent of the Government to debar all the promoters, only for the reason for issuing a guarantee which is enforceable, unless such guarantee has been invoked and not paid for, or the guarantor suffers from any other antecedent listed in section 29A. The resolution applicants stated that by purporting to disqualify the entire class of guarantors under the said clause would be violative of the valuable rights of the applicant. If the guarantee is not invoked and demand is not made on the guarantor, the debt payable by him is not crystallized and the guarantor cannot be therefore said to be in default for breach of the guarantee and be penalized merely because a legal and binding contract of guarantee exists, which is otherwise impossible but is subject to its invocation in accordance with the terms of the guarantee. The NCLT agreed to the view observing that the guarantors in respect of whom, a creditor has not invoked the guarantee or made a demand under guarantee should not be prohibited. Therefore, no default in the payment of dues by the guarantor has occurred, cannot be covered under clause (h) of Section 29(A). It cannot be the intent of clause (h) to penalize those guarantors who have not been offered an opportunity to pay by calling upon them to pay the dues, by invoking the guarantee. Therefore, the words “enforceable guarantee” appearing in clause (h) are not to be understood by their ordinary meaning or in the context of enforceability of the guarantee as a legal and binding contract, but in the context of the objectives of the Code and Ordinance in general and clause (h) in particular.

The word “connected persons” appear in clause (j) of section 29A. A person who is connected to the persons as defined under the Explanation, shall be disqualified if the other person suffers disability under clause (a) to (i) of section 29A.

“Connected persons” have been defined so as to include three categories –

Explanation.— For the purposes of this clause, the expression “connected person” means-

(i) any person who is the promoter or in the management or control of the resolution applicant; or

(ii) any person who shall be the promoter or in management or control of the business of the corporate debtor during the implementation of the resolution plan; or

(iii) the holding company, subsidiary company, associate company or related party of a person referred to in clauses (i) and (ii):

The definition can be analysed as follows-

of an ineligible resolution applicant.

Further, in accordance with clause (iii),

of the corporate debtor, who suffer from disqualification under section 29A.

Further, in accordance with clause (iii),

For scope of the term “related party”, see below.

Note that from the scope of “holding company, subsidiary company, and associate company”, the following have been excluded, i.e. the following can proceed to submit the resolution plan-

For the purpose of determining whether a company is an associate of the other, the definition as under Section 2(6) of the Companies Act, 2013 shall be referred, wherein “Associate company”, in relation to another company, means a company in which that other company has a significant influence, but which is not a subsidiary company of the company having such influence and includes a joint venture company.

For the purpose of the said definition, “significant influence” means control of at least 20% (twenty per cent) of total share capital, or of business decisions under an agreement.

For example- “Company X” holds 20% of total share capital of Company “Y”, then Company X will be deemed to be an associate company of Company Y.

A relevant question would be regarding the point of time at which the ineligibility has to be ascertained. The language of the section suggests that only present status of the resolution applicant has to be seen. No lookback period has been prescribed. However, the authors opine that it would be upon the committee of creditors to decide on whether any past event shall be weighed upon while making the final decision.

More of a Diktat?

The Code has been designed to find the best possible way out for an ailing entity- it was meant to be more inclusive in approach. However, the reach of Section 29A extends to four layers (as explained above), and may lead to exactly opposite results. The intent of the Code was not to restrict genuine applicants, but only to exclude participation from habitual miscreants or applicants who might themselves be sick, however, Section 29A may result in elimination of persons who might be interested in buying stakes in the entity.

See RBL Bank Ltd. v. MBL Infrastructures Ltd. [CA(IB) No. 543/KB/2017; order dated 18.12.2017], where the NCLT, considering the objective of the Ordinance, 2017, opined that clause (h) of section 29A is not to disqualify the promoters as a class for submitting a resolution plan. The intent is to exclude such class of persons from offering a resolution plan, who on account of their antecedents, may adversely impact the credibility of the processes under the Code. The case is, for the time being, pending with NCLAT[3].

The Code was designed to find the best possible way out for an ailing entity- it was meant to be more inclusive in approach and there was definitely no intention to avoid promoters from submitting resolution plans. However, the reach of Section 29A extends to four layers (as explained above), and may lead to exactly opposite results. It is quintessential to ensure that the citadel of insolvency resolution does not have holes into it but at the same time, it is also important to ensure that the citadel is not inaccessible, with no steps, doors or windows.

The intent of Section 29A will be counter- productive if it results into a whole lot of intending resolution applicants being disentitled, because the recursive definitions of related party, connected persons etc are cast wide enough, intertwining all the entities promoted by an entity.