The concept of independent directors was first introduced in the Desirable Corporate Governance Code issued by the Confederation of Indian Industry[1] followed by the recommendation in the Corporate Governance Committee constituted by SEBI and headed by Mr. Kumar Mangalam Birla[2] (Kumar Mangalam Birla Committee). Later in the year 2000, SEBI incorporated the recommendations of the Kumar Mangalam Birla Committee under Clause 49 of the Listing Agreement[3]. Independent directors have always been regarded as the means to strengthen the corporate governance framework in a public or a listed company. 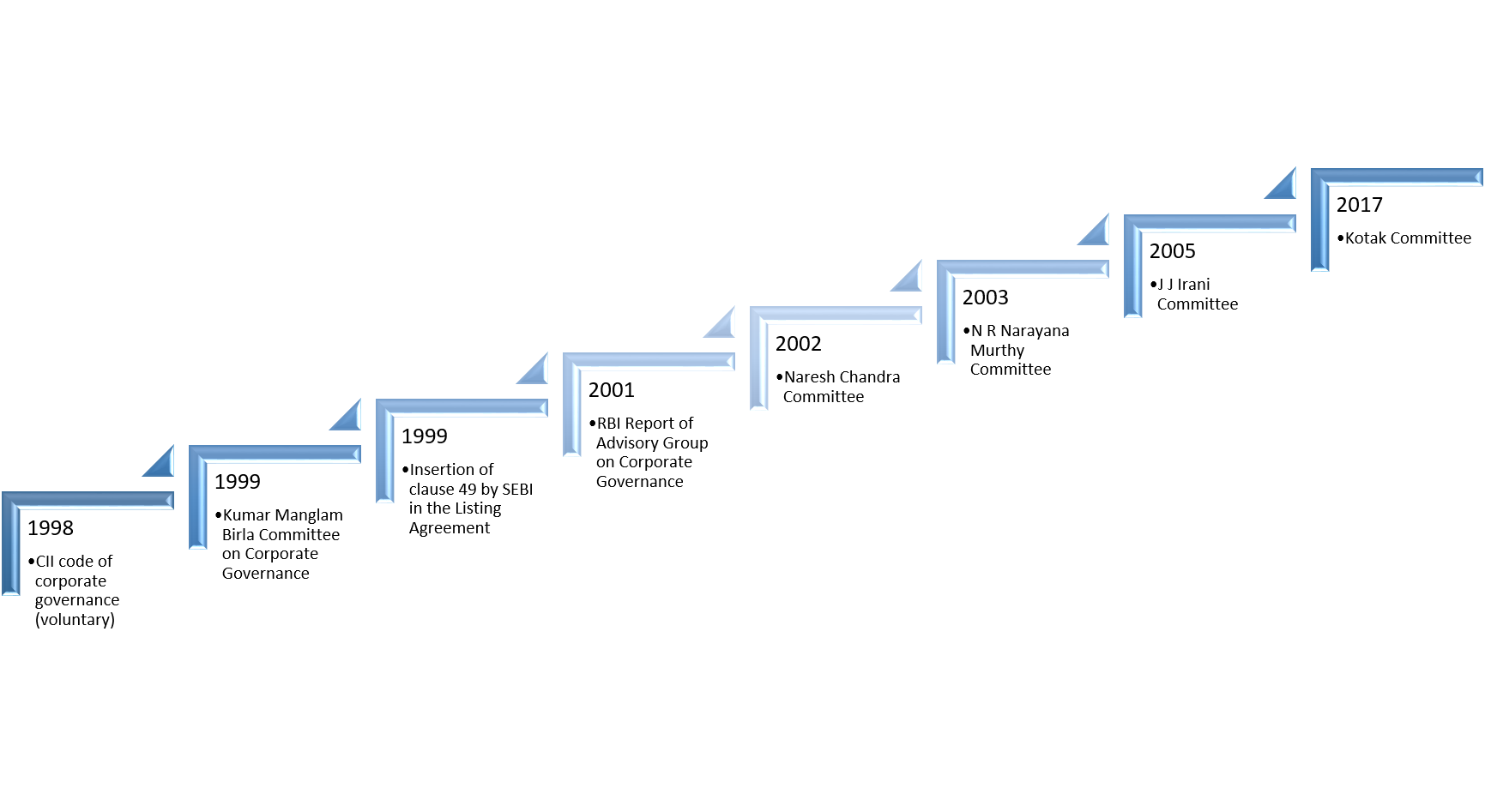 Keeping in mind the intent of the lawmakers to introduce the requirement for having Independent Directors (IDs) on the board of certain companies, it is understood that SEBI cannot accept a situation where the IDs themselves turnout to either be ineffective for strengthening the corporate governance or act against the interest of the public shareholders. Therefore, with the intent to further strengthen the role and responsibility of IDs, SEBI has introduced a Consultation Paper[4] (Paper) on review of regulatory provisions related to IDs on 2nd of March, 2021. Through this Paper, SEBI has proposed to make stringent regulatory changes in the provisions of the Listing Obligation and Disclosure Requirements Regulations (LODR/ Listing Regulations) relating to

The Paper is open for public comments till 1st April, 2021.

1.      Widening the criteria for independence

Currently, Regulation 16(1) of the Listing Regulations provides the definition of “independent director”. SEBI proposes to broaden the criteria of “independence” by expanding the outreach of the restrictions given under the said Regulation and at the same time standardising the cooling off period provided therein.

The Paper proposes two amendments in the independence criteria of IDs in addition to the extant definition:

This will be in addition to the existing fetter on the KMP and employee of the listed entity, its holding, subsidiary or associate company.

Currently, the Regulations specify a cooling-off period of 2 years in case of material pecuniary transaction between a person or his relative and the listed entity or its holding, subsidiary or associate company. This is proposed to be increased to 3 years to make it similar to the other provisions of Regulation 16 where a cooling-off period of 3 years is required to be satisfied.

Rationale behind the proposal:

This proposal aims to make the independence criteria more broad so that there is no way by which the promoter group entities can take undue benefit due to any loopholes in the language of law.

On the other hand, the proposal for increasing the cooling off period is for making the same uniform all through the independence criteria.

In a situation where either of the two resolutions fail, the company may either propose another person as ID, or put the same proposal for a second vote

A similar concept of dual voting approach has been prescribed by SEBI for the removal of IDs as well.

SEBI has, in its consultation paper, specified that the present system of appointment of IDs may be influenced by the promoters – in recommending the name of ID and in the approval process by virtue of shareholding. This may hinder the “independence” of IDs.

Therefore, SEBI has proposed the “dual approval” model in line with the legislative requirements of Israel and UK, especially in interest of the minority shareholders.

Since, the ID may be removed through a simple majority, the promoter may have significant influence in the removal process by virtue of shareholding. So, the “dual approval” model has been proposed to be extended to govern the removal of IDs as well. 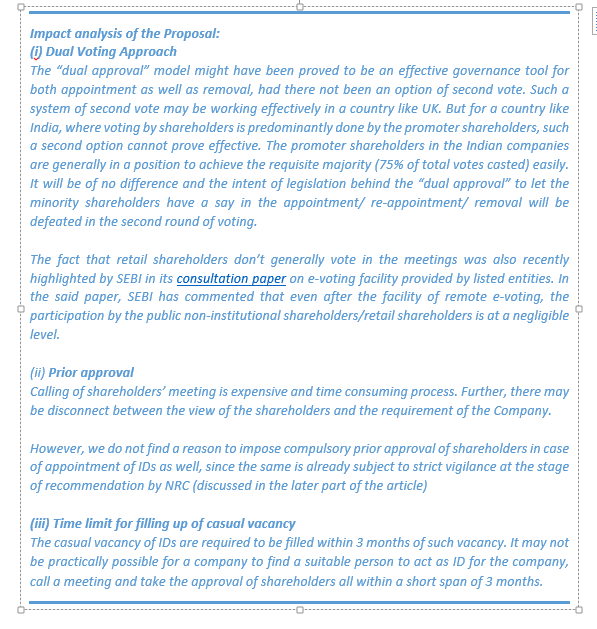 Through the Paper, it becomes clear that the intention of SEBI is to strictly monitor the resignation of the IDs where the real cause of resignation should be clearly known in place of the apparent cause the company and ID may try to show.

The Paper provides for a cooling off period of 1 year in two cases:

Further, the Paper also proposes that the complete resignation letter of the outgoing ID needs to be disclosed to the stock exchange.

The cooling off period of 1 year before transition of an ID as a WTD in the same company has been proposed to ensure there is no compromise in the independence of the director during his term as an ID.

It is observed that IDs often resign for reasons such as pre-occupation, other commitments or personal reasons and then join the boards of other companies. There is, therefore, a need to further strengthen the disclosures around resignation of Independent Directors.

The NRC is required to recommend the persons to be appointed as IDs in the board of the company. Though the Listing Regulations already requires the NRC to formulate criteria regarding such appointment, the role of NRC, in practice, does not suffice the intent of law properly. Therefore, vide the Paper, SEBI has prescribed the following procedure for selection of candidates for the role of NRC.

5.       Modification in composition of NRC and AC

The Paper also seeks to bring in some changes in the constitution of NRC and AC. The following changes are proposed to be made:

Considering the importance of the Audit Committee with regard to related party transactions and financial matters, it is proposed that audit committee shall comprise of 2/3rd IDs and 1/3rd Non-Executive Directors (NEDs) who are not related to the promoter, including nominee directors, if any. 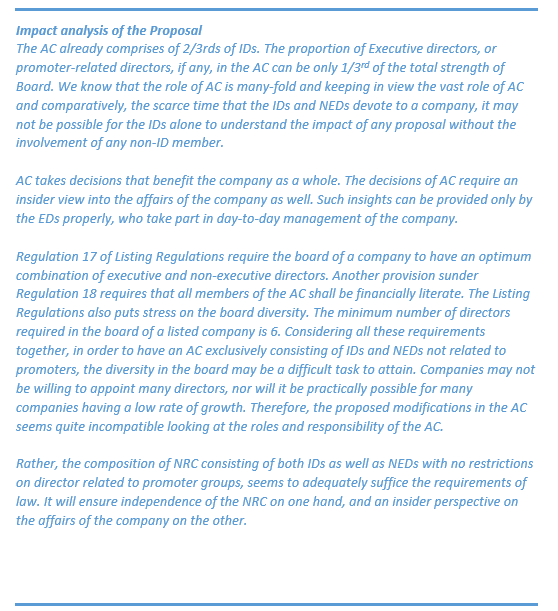 The Paper proposes various sorts of enhanced disclosures under different headings. Disclosures leads to transparency which is an important principle to be kept in mind under the arena of corporate governance. The various proposed disclosures has been discussed below:

The consultation paper has made various proposals in relation to the remuneration of IDs. The proposals include the following:

The removal of profit linked commission and increase in sitting fees is proposed with a view that the remuneration to IDs should be on the basis of their value and time-commitments to the company, without linking the same to the profits of the company. This would lead to IDs getting a fixed fee, without having any stake in the long-term growth of the company.

The concern with this approach – that profit or performance linked commission may encourage short-termism and lead to conflicts, may be addressed by permitting ESOPs to IDs (instead of profit linked commission) with a long vesting period of say, 5 years.

Our analysis on the removal of profit-linked commission and substitution of same with ESOPs has been dealt with in our other article and may be referred.

The proposed changes are extremely significant and will have a remarkable impact on the corporate governance of listed entities. While on one hand, more transparency may be achieved by means of amendments like enhanced disclosure on resignation, appointment, selection of candidates as IDs, etc, however, proposal relating to dual voting may not serve to achieve the purpose due to the presence of the option for second round of voting. Of all, the proposals seek to check the interference of promoters at all levels of corporate governance and ensures much more independence to the IDs where the IDs will be independent in both letter and spirit. However, in some areas, the proposed requirements seems to be very much stringent, which may hinder the idea of “ease of doing business”.

SEBI’s move to allow stock options to independent directors – Whether a... Corpus contributions: Whether CSR?
Scroll to top