The financial year 2017-18 witnessed one of the major reforms in the country, that is, the exordium of Goods and Services Tax (GST). GST replaced the erstwhile central excise duty, sales tax and service tax laws, thereby changing the indirect tax regime entirely. This had large scale implications as the country had been an unfortunate hostage of apprehension, uncertainty and overhaul of various economic models.

As one would expect, whenever there has been a change, it has been accompanied with resistance and ambiguity. Unfortunately, it takes time for the certainty and safe harbour to surface, in the meantime ultra conservative opinions continue to rule the scene. The securitisation market in India was also affected by this change. Despite performing quite well in the first quarter of the last financial year, the market slowed down in the rest three quarters; this was mainly due to a difference in opinion with respect to applicability of the GST on assignment of receivables.

This issue was however settled by a set of FAQs issued by the GST Council on financial services[1]. The FAQs compared assignment or securitisation transactions with derivatives and hence termed it as a security for the purpose of GST laws. Under the current GST law, GST is not charged on securities. Therefore, vide these FAQs the confusion with respect to applicability of GST on assignment or securitisation transactions have been dispensed with. [Read our detailed analysis here].

The overall market growth was primarily driven by the increase in PTC issuance volumes. The last two years have seen the PTC market grow on the back of regulatory developments such as the revised Priority Sector Lending (PSL) guidelines which decreed banks to achieve various sub-targets within the overall PSL target and also progressively increased the PSL target for foreign banks. The year saw a growing number of non-banking finance companies (NBFCs) investing in PTCs primarily due to the higher yields attached to those instruments.

The PTC market has also benefitted from a growing investor base as a number of asset management companies (AMCs) restarted investments in securitisation transactions in FY2017. AMCs had earlier abstained from investing in securitised papers on account of tax-related concerns which have been subsequently resolved. Of the three major investor categories, namely banks, NBFCs and AMCs, the latter two made up the bulk of the investments in non-PSL securitisation.

The following graph shows the trend of securitisation and market composition (DAs versus PTCs) during the last three years. 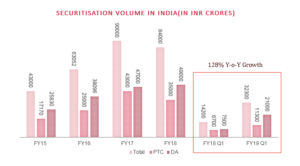 The role of regulation in shaping the market is critical. The Indian securitization market is largely driven by the need to meet the priority sector targets for banks; therefore, the dependence on demand for priority sector loans is prodigious.

Priority sector lending targets are specific requirements laid down by the Reserve Bank of India (RBI), which require banking institutions to provide a specified portion of their total lending to a few specific sectors. Banks in India are required to direct at least 40% (32% in case of foreign banks having less than 20 branches) of their total credit to certain sectors categorized as priority sectors. Priority sector involves agriculture, education, MSME’s, housing, social infrastructure, renewable energy and others.

Higher PTC yields (yields observed in Q1 FY2019 in ICRA rated transactions was 75bp – 100bp higher compared to previous fiscal) may also have improved the attractiveness of PTCs vis-à-vis the other options available to banks for meeting PSL targets like PSLCs. The asset class wise break-up of PTC transaction has been shown in the table below:

Also, the spurt in securitisation was despite a significant 47 per cent pick-up in trading of priority sector lending certificates (PSLCs), the hot pick of the market, to around Rs 86,300 crore during the quarter, as per rating agency ICRA. The PSLCs act as an alternative to securitisation for banks falling short of meeting the mandated PSL requirements. Mortgage loans dominated the securitisation volumes with a 79 per cent share, including 66 per cent home loans and 13 per cent loans against property, it said.

Cross-Breeding of Entities: NCLT upholds the view! Subordination of Operational Creditors under IBC: Whether Equitable?
Scroll to top