Blog - Latest News
You are here: Home / Insolvency and Bankruptcy / IBBI lays down procedure for Resolution Plans -Third set of amendment in...

Following major amendments have been brought:

This write up deals with the points 1 to 3.

To read about the other topics covered under the Amendment Regulations, please refer to the article,” CIRP Amendment lays focus on Class of Creditors” by my colleague Ms. Megha Mittal.

Regulation 17 of the IRP-CP Regulations (“Regulations”) requires the IRP to submit a report certifying constitution of the committee of creditors (“CoC”) to the NCLT within 30 days of his appointment and the first meeting of the CoC to be held within 7 days of filing such report which effectively resulted to allowing the first CoC meeting to be held within 37 days of the commencement of the CIRP.

The Amended Regulations have shortened the above time period by allowing only 2 days from the verification for filing the report of constitution of the CoC and conducting the first meeting of COC within 30 days from the commencement of CIRP.

[“T” being the date of appointment of interim resolution profession]

A minimum 7 days notice for the meeting of COC was required under regulation 19 which has now been reduced to 5 days.

Further, the Regulations allowed shorter notice of 24 hrs if approved by the CoC. This period of 24 hours should be read as 48 hours in case the CoC has any authorised representative.

Voting at the Meeting

The amendment has brought to rest one of the biggest difficulty and dichotomy of the erstwhile regulations – quorum within quorum.

The erstwhile regulations required presence of “ALL” CoC members for the voting to be done at the meeting. In case even one member of the CoC could not make at the meeting, the RP was required to allow facility to vote by electronic means through remote locations. This was adding on to the CIRP cost and also delaying the process.

Also, the members may now change their vote while the e-voting window is active.

Introduction of methodology for Invitation EoI for submitting Resolution Plan

The major change brought into force vide this amendment is the fact that a proper procedure is now in place for inviting resolution plans. The procedure provides along with detailed timelines, a source of reference to the resolution professionals.

The major points to be noted in the methodology prescribed is –

Regarding prohibiting of accepting any NRF while assessing eligibility of RAs:

The Amended Regulation puts an absolute prohibition on accepting any non-refundable deposit while submission of resolution plans. This provision seems to be a reactive amendment brought in light of many EoIs which were floated with an unreasonable and exorbitant amount of NRF.

It is to be noted that the statute should not be based on extremities of the pendulum; infact should strike a balance between law and practice.

To put it simple, complete doing away of an NRF at the stage of submission of resolution plan may flood the RP with frivolous plans and burden him with unnecessary communications and documentations in a water-tight timeline process.

Accordingly, to our minds, the appropriate way of balancing the situation would have been putting in a reasonable NRF, as approved by the CoC, so as to keep any such frivolous bidders at bay. This would help in the major filtering of the non-serious bidders.

Amendment with respect to submission of resolution plans

Snapshot of steps for submission of resolution plan

Therefore, after perusal of the two new insertions, one can sum up the process of resolution plan to be as follows: 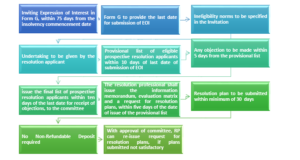 Timelines involved in a resolution plan at a glance: