According to a report on the Indian direct selling industry published by FICCI and KPMG, the direct selling market in India has grown at a CAGR of 16 per cent over the past five years to reach INR75 billion today.[2] Due to this unprecedented rise in direct selling industry and the growth of a large distribution base, major scams have been witnessed over the years in reputed companies owing to the nature of marketing methods adopted by them.

Rationale behind the launch of the Scheme

The direct selling industry has brought about with itself a huge reservoir of marketing, selling and distribution base for the goods and services, which has given rise to various fraudulent practises in the marketing and the distribution system. Instances can be drawn from the famous Amway and the Qnet case where entire money in the chain was earned only through the recruitment of new members and adding more participants to the channels of distribution, rather than the actual sale of the goods and services. Though the Amway was convicted of “illegal pyramid scheme” it could finally escape all criticism under the umbrella of the “the Amway safeguard rules”. However, the case has left strong marks of scepticism in the validity of the direct selling business.

The companies which were engaged in multi-level marketing were carrying out various frauds through the recruitment of large number of participants in the system. Thus, a need was felt where a robust system of direct selling guidelines was required to protect the interest of the consumers.

Defining the Pyramid and the MLM schemes

The key feature of the pyramid is that as the entrants in the last layer of the pyramid continue to get more and more participants who pay money. By way of this a hierarchy is created and the sponsor who holds the top most position is the recipient of the highest commission. The Amway case is the perfect example of the “illegal Pyramid scheme” where the purpose of the scheme was to make money through recruiting more distributors at various levels.

The pyramid scheme is illegal in India under the Prize chits and Money Circulation Schemes (banning) act, 1978. Hence there is a non-applicability of this scheme.

Following are some of the key constituents of the Pyramid Schemes

The level of unsold inventory

Under the pyramid schemes the unsold inventories of the participants is not generally brought back by the distributor.

Emphasis on the recruitment of more members

There is a greater emphasis on the recruitment of more members rather than promoting and distributing the product. The purpose here is to fetch higher commissions for the sponsors at the top most level.

There is no material agreement entered between the direct selling entity and the direct seller on buy back, refund, repurchase policy of the unsold inventory.

No cooling off period

There is no cooling off period given to the direct sellers up to which they can cancel the contract.

In an MLM structure, multi-level marketing or the network marketing are used to sell the products directly to the consumers in which the salesmen are compensated not only for the work done by them but also for the sales of the people who have joined the company through them.[4] 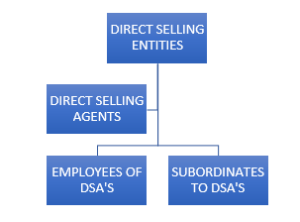 Comparing the MLM and the ‘Pyramid’

‘Direct selling’ has been clearly defined in regulation 6 which means marketing, distribution and the sale of the goods or providing of any services as a part of network of direct selling other than under a pyramid scheme.

Similarly, the network is defined as an arrangement of intersecting horizontal and vertical lines. To be a network it is therefore necessary that there is a hierarchy of a direct selling agents such that there is a superior subordinate relationship at all levels of distribution

This network of direct sellers also includes the multi-level marketing method of distribution.

Thus, network of direct selling shall be hierarchical. Single level of distribution would not constitute any network.

Comparing the network, the Pyramid and the MLM

The network may be at a horizontal level also. For example, if there is one direct selling entity selling goods and services through a single level of the direct sellers, all at the same level shall constitute a network. However, Pyramid necessarily has to be a vertical hierarchy such that there should a superior subordinate relationship. Multi-level marketing shall have to a be a legal marketing strategy and not a fraudulent scheme.

Understanding the applicability of the scheme

The applicability of the above guidelines on the direct and selling agents have to be checked from the following facts:

This scheme is applicable on the following companies.

The guidelines shall not be applicable to the pyramid scheme. This is because these schemes are generally money-making schemes and not any legal marketing strategy. This comes from the fact that pyramid schemes are generally created not to market the products, but to create a distributor base for earning large money through promotion. Thus, the direct selling guidelines take a legal view and apply to only legal MLM schemes and direct selling.

Further the companies having only a horizontal distribution base such that they are not recruiting or sponsoring further levels in the chain shall be kept out of the purview of these guidelines.

There is no scepticism regarding the benefits of the direct selling guidelines on the interest of the consumers in prevention of the frauds against them, however comprehending the applicability of these directions is a hard nut to crack for various entities who are in a dilemma to comply with these guidelines. The guidelines do not specifically state the extent of the applicability; however, they do give certain apparent indications to the entities to whom these guidelines shall be applicable.

Thus, any company desirous of increasing their distribution base for selling wide range of products or services and who intend to do it by creating a hierarchical distribution that requires further outsourcing and recruitment shall be required to comply with the guidelines. Further the outsourcing agreement between the DSA and the service provider shall clearly state the provisions regarding contracting and the sub-contracting, subsequent to which only a network of distributors could be created.