Blog - Latest News
You are here: Home / Insolvency and Bankruptcy / IBBI eases norms for setting up of Information Utilities

These regulations inter alia stipulated the shareholding pattern and the composition of the Board of Directors in IUs. These regulations provided that ordinarily a person with/without persons acting in concert (”PAC”) should not hold more than 10% of paid up equity share capital or voting power of an information utility, while allowing certain specified persons to hold up to 25%.

However, to kick start the eco system, the regulations had provided a relaxation to persons resident in India by allowing them to hold with/without PAC, upto 51% in the equity share capital or total voting power in the information utility during a period of three years from the date of its registration. Now, considering the lacklustre response in setting up IU coupled with the fact that till date only one information utility (NeSL) has been registered, IBBI has notified certain amendments to the regulations on 29th September, 2017 (”the amended regulations”). By means of this amendment, IBBI has relaxed the eligibility criteria for registration of IU.

Prior to the amendment, a person (public company) can be registered as an IU only if it satisfies the eligibility criteria as specified under Regulation 3, which  inter alia included the following:

(e) it is not under the control of person(s) resident outside India;

(f) not more than 49% of its total voting power or its paid-up equity share capital is held, directly or indirectly, by persons resident outside India;

The above two clauses have been omitted vide amendment regulations. Hereafter, a public company can apply for registration even if it is under control of person(s) resident outside India, thereby promoting foreign investment and greater flexibility.

Further, prior to the amendment, an exception to the prescribed shareholding was allowed up to a period of 3 years from the date of its registration. However, the same was allowed only for a person resident in India.

However, post amendment, such allowance has now been segregated in the following ways: 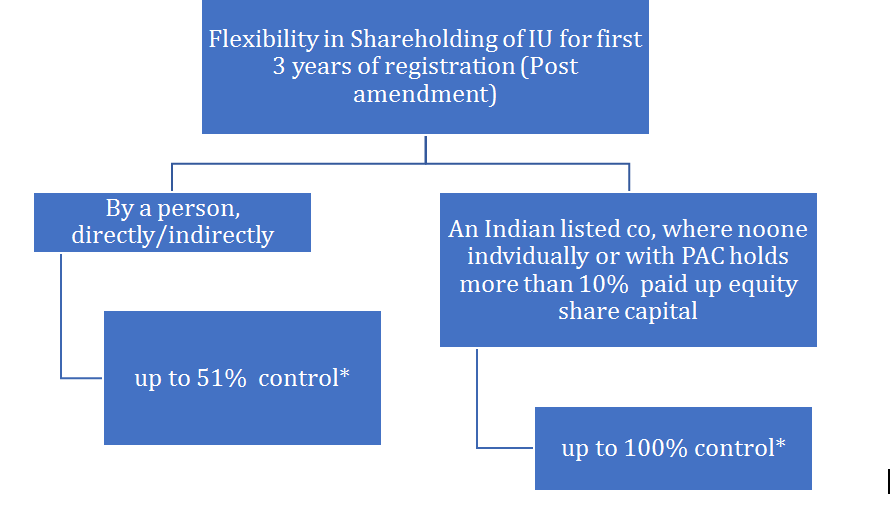 Note: The above flexibility has been extended for IUs registered before 30th September, 2018. This will obviously to encourage registration of new IUs under IBC.

Regulation 9(1A) has been inserted to stipulate that more than half of the directors of information utilities shall be Indian nationals and residents in India.

Thus, by inserting this amendment, IBBI has tried to neutralise the effect of foreign investment in IU’s. It is so that though relaxations have been provided by the amended regulations for a limited period of time to persons resident outside India to own and control the information utilities, however, IBBI has ensured that the management of the IU’s remains in Indian hands.

While it is understood, that IBBI has relaxed the provisions for IUs under the Code, more registrations are awaited for setting up IUs. With mammoth information pertaining to credit and default of Corporate Persons, it is crucial to have supporting organisations, which are both reliable and credible in terms of storing large amount of financial information. More such registered entities will only help the stakeholders and especially the judiciary and further the objective of time-bound process of CIRP and liquidation under the Code.

You may also want to read our article on the setting of first IU here.