MCA has issued a notification notifying the Companies (Restriction on Number of Layers) Rules, 2017[1], imposing a limit of two layers of subsidiaries which shall be effective from September 20, 2017[2]. Earlier, MCA vide public notice dated 1 June 28, 2017[3] had conveyed its intent of issuing a notification proposing amendments to the Companies (Specification of Definitions Details) Rules, 2014 containing the restriction on layers of subsidiaries beyond prescribed number and had invited suggestions on the draft notification. This write up initially discusses the conditions imposed and thereafter analyses the permitted combinations.

Proviso to Section 2 (87) along with explanation (d) was proposed to be omitted in Companies (Amendment) Bill, 2016. However, in view of reports of misuse of multiple layers of companies, where companies create shell companies for diversion of funds or money laundering, MCA has decided to retain the provisions and commence the aforesaid proviso and explanation. Further, MCA had no intent to exempt private companies from the requirement as well. Companies (Amendment) Bill, 2017 as passed by Lok Sabha omitted the amendment proposed in Proviso to Section 2 (87). 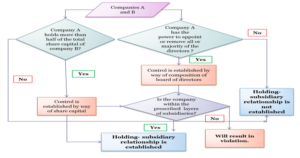 Figure 5 of Taxmann’s Your Queries on Companies Act, 2013

Rule 2(2) of Companies (Restriction on number of layers) Rules, 2017 shall not apply to following classes of companies, namely:-

(a) a banking company;

(c) an insurance company being a company which carries on the business of insurance in accordance with provisions of Insurance Act, 1938 and Insurance Regulatory Development Authority Act, 1999;

(d) a Government company referred to in clause (45) of section 2 of the Act.

Exemptions in cases of Housing Finance Companies, Core Investment Companies as well as Non-Operative Financial Holding Company, Companies that become subsidiary entities pursuant to lenders acquiring majority of shareholding in the borrowing entity as a measure to deal with stressed assets in accordance with the guidelines issued by the Reserve Bank of India from time to time are missed out in the Rules notified.

First proviso to Rule 2 of the Rules provides exemption to a Company from acquiring a company incorporated in a country outside India with subsidiaries beyond two layers as per the laws of such country.

It cannot be interpreted that a Company incorporating subsidiaries outside India will have to adhere to the restriction of layers even if the same is permitted as per law of that country.

‘Layer’ cannot mean ‘Layers’ based on interpretation that singular includes plural. Therefore, it should not be read as any layer represented by a wholly owned subsidiary. The whole purpose will get defeated if companies are allowed to incorporate layers of wholly owned subsidiaries without any restriction.

It is very pertinent to ponder whether the wholly owned subsidiaries can be at layer not immediately following the layer of holding company.

Therefore, the layer of wholly owned subsidiary has to reflect in the first layer and not thereafter in order to avail the exemption.

Similar restriction on number of layers of investment companies has already been in force under Section 186 (1).  The provisions of this rule shall not be in derogation of the proviso to sub-section (1) of section 186 of the Act.

Rules are prospective in nature

The holding companies, other than exempted companies, that breach the conditions of layers of subsidiaries as on the date of commencement of provision are prohibited from incorporating additional layer of subsidiaries.

Such holding companies shall file return in Form CRL-1 with the Registrar within a period of 150 days from the date of publication of these rules in Official Gazette. The form requires specifying layer number of the subsidiary and percentage of shares held by holding company.

The Rules further provide that, such Company shall not, in case one or more layers are reduced by it subsequent to the commencement of these rules, have the number of layers beyond the number of layers it has after such reduction or maximum layers allowed in sub-rule (1), whichever is more.

No restriction on horizontal propagation

All the below mentioned structures are permitted and well in compliance 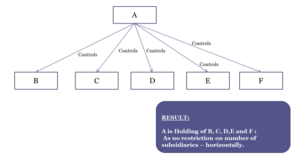 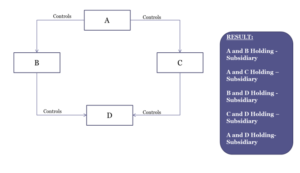 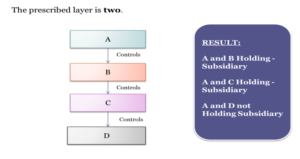 Figure 8 of Taxmann’s Your Queries on Companies Act, 2013

In the aforesaid structure, if we consider on as is basis, there exists more than 2 layers of subsidiaries. Therefore, an existing company cannot go beyond ‘D’. Once the provisions are enforced, an existing holding company A will not be able to float ‘D’ unless any exemptions/ relaxations become applicable.

In that case, the structure is permissible.

In that case, the structure is not permissible for reasons stated above.

Case 4 – ‘B’/’C’ is a subsidiary incorporated outside India:

Currently, the wording of draft rule prescribes ‘acquired’ subsidiaries to be exempted. However, there is no reason to infer that the benefit cannot be extended to subsidiaries incorporated outside India if the laws of host country permit the same.

In that case, the restriction shall not apply.

The expression ‘company’ includes body corporate. Therefore, an existing company cannot go beyond ‘D’. Once the provisions are enforced, an existing holding company A will not be able to float ‘D’ unless any exemptions/ relaxations become applicable. 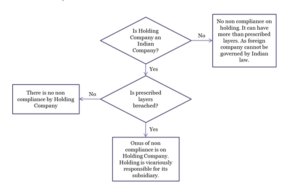 Figure 7 of Taxmann’s Your Queries on Companies Act, 2013