On June 30, 2017[1], the MCA came up with the Companies (Transfer of Pending Proceedings) Second Amendment Rules, 2017 (‘TPP Second Amendment Rules, 2017’) substituting the provisions pertaining to voluntary winding up and winding up on the ground of inability to pay debts. The TPP Rules, 2016 was issued just 6 months back; however, the same is undergoing change for the second time. The provisions of the TPP Rules, 2016 shall come into force –

Rule 4 of the TPP Rules, 2016 required all applications and petitions relating to voluntary winding up pending as on April 1, 2017 to be dealt by the High Court in accordance with the provisions of the Act, 1956. The same has been depicted below[3]: 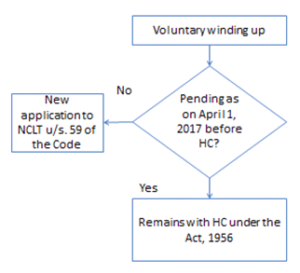 Due to lack of clarity, difficulty was faced as to when the company shall consider the winding up petition pending before the High Court.

The substituted rule 4 of the TPP Rules, 2016 requires only those voluntary winding up proceedings to be dealt under the Act, 1956 which fulfils both the conditions laid down below –

The scenario which emerges after substitution has been depicted below: 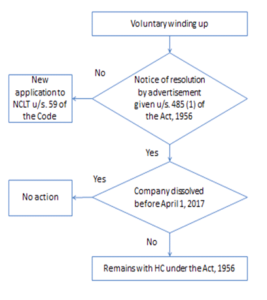 MCA, on June 29, 2017 issued the Companies (Removal of Difficulties) Order, 2017 replicating the same provision in section 434 of the Act, 2013 which deals with transfer of certain pending proceedings and shall come into effect from June 29, 2017.

Winding up on the grounds of inability to pay debts

However, if any of the aforementioned condition is not satisfied then a new application under the Code shall be made. The figure below[4] envisages the scenario: 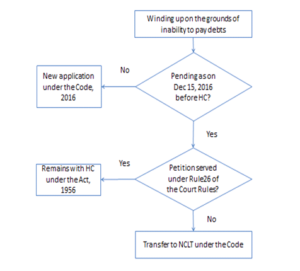 The petitions required to be transferred under the Code shall be made in accordance with the details as required under section 7, 9, or 10, as the case may be, and shall be submitted to the NCLT within a period of sixty days (such sixty days shall be counted from December 15, 2016).

There is no change as far as transfer of pending proceeding is concerned. However, the timeline of sixty days for transferring the pending petitions before the NCLT was replaced with six months vide the TPP Amendment Rules, 2017. In author’s view, six months shall be counted from the date on which Rule 5 of the TPP Rules, 2016 came into effect, i.e., from December 15, 2016; however, the time limit of six months becomes irrelevant as the date for transferring the petitions under the Code has been extended to July 15, 2017. Post July 15, 2017 the petitioner will be required to make a fresh application under sections 7, 9 or 10 of the Code, as the case may be.

Further, the diagram below depicts the case where petition required to be transferred under the Code has not been transferred: 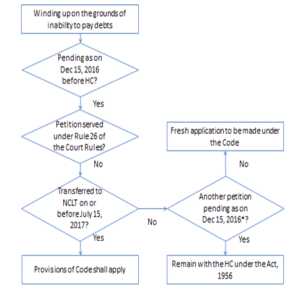 *Such another petition shall be filed against the same company.

The provisions of the Act, 1956 shall apply to a winding up where:

However, if any of the aforementioned condition is not satisfied then an application under the Code shall be made. Language of the TPP Second Amendment Rules, 2017 reads as follows:

“In the principal rules, for rule 5, the following rule shall be substituted and shall be deemed to have been substituted with effect from the 16rh day of June, 2017. . . .”

While the intention of the TPP Second Amendment Rules, 2017 cannot be to substitute the entire rule; however, the Ministry missed specifying sub-rule (1) and therefore, ended up with an inadvertent error.

[2] Refer our write-up on co-existence of winding-up petition and application under Code: http://indiacorplaw.blogspot.in/2017/05/co-existence-of-winding-up-petition-and.html