Prior to the amendment any director intending to participate in the meeting through electronic mode may intimate such decision at the beginning of the calendar year which shall be valid for a period of one year. However, there was no clarity on whether a director giving declaration under rule 3 (3) (3) of the MBP Rules, 2017, can participate in the meeting in person.

The Ministry has clarified by inserting a proviso which provides that such director may participate in the meeting in person provided intimation about his intention to participate in person is provided to the company sufficiently in advance.

The scenario that emerges is as follows:

Recording the decision of directors

Rule 3 (11) (a) of the MBP Rules, 2017 casted a responsibility on the Chairperson of the meeting to announce the summary of the decision taken on each agenda item along with the names of the dissenting directors, if any.

Constitution of AC and NRC

MCA vide its notification dated July 5, 2017[1], exempted following classes of unlisted companies from the requirement of appointing an Independent Director (‘ID’) pursuant to section 149 (4) read with Rule 4 of the Companies (Appointment and Qualification of Directors) Rules, 2017 (hereinafter referred to as “DIR Rules, 2017”) –

(a) a joint venture;

(b) a wholly owned subsidiary; and

(c) a dormant company as defined under section 455 of the Act.

In this regard, various companies faced issues on whether an unlisted company (falling under one of the classes mentioned above) is required to comply with the requirement of appointing an ID under sections 177 and 178 of the Act, 2013?

The position was clear pursuant to section 135 of the Act, 2013 read with applicable rules which provided as follows –

Rule 5 (1) (i) of the Companies (CSR Policy) Rules, 2014 provides that an unlisted public company or a private company covered under sub-section (1) of section 135 which is not required to appoint an independent director pursuant to sub-section (4) of section 149 of the Act, shall have its CSR Committee without such Director.

Considering the aforementioned provision, since, the principal section does not mandate certain classes of companies to comply with the requirement of section 149 (4), IDs need not be appointed for meeting the composition prescribed under sections 177 and 178 of the Act, 2013.

However, in order to clarify the existing position, MCA issued notification dated July 13, 2017, substituting Rule 6 of the Companies (Meetings of Board and its Powers) Rules, 2014 as follows-

“6. Committees of the Board. – The Board of directors of every listed company and a company covered under rule 4 of the Companies (Appointment and Qualification of Directors) Rules, 2014 shall constitute an ‘Audit Committee’ and a ‘Nomination and Remuneration Committee of the Board’”

Consequently, such companies have been exempted with the requirement of constituting an Audit Committee and a Nomination and Remuneration Committee. However, one needs to understand the impact of this notification in line with the Reserve Bank of India (‘RBI’) and National Housing Bank (‘NHB’) Regulations.

Constitution of AC and NRC pursuant to specific laws

Non-Banking Financial Companies (‘NBFCs’) and Housing Finance Companies (HFCs) are required to comply with the provisions of directions/guidelines/ circulars and notifications issued by the RBI and NHB, respectively.

Para 68 (1) and (2) of the Non-Banking Financial Company – Systemically Important Non-Deposit taking Company and Deposit taking Company (Reserve Bank) Directions, 2016[2] (hereinafter referred to as “Directions, 2016”) requires applicable NBFCs[3] to constitute an Audit Committee, consisting of not less than three members of its Board of Directors and a Nomination Committee, respectively.

Also, Para 3 (I) and (II) of the Housing Finance Companies – Corporate Governance (National Housing Bank) Directions, 2016[4] (hereinafter referred to as “HFC Directions, 2016”) requires applicable HFCs[5] to constitute an Audit Committee, consisting of not less than three members of its Board of Directors and a Nomination Committee, respectively.

Therefore, even if a company is exempted from the purview of sections 177 and 178 of the Act, 2013, but if such company is regulated by any other authority, viz., RBI or NHB or any other authority and the regulations issued by such authority requires constitution of Audit Committee and/ or Remuneration Committee then the compliance of such specific regulations needs to be ensured.

Similarly, NBFCs and HFCs though exempted from section 177 and 178 of the Act, 2013 by virtue of the MBP Second Amendment Rules, 2017 read with DIR Rules, 2017 will be required to constitute the Audit Committee and Nomination Committee in accordance with the applicable regulations.

The scenario that emerges post amendment is as follows (from Co. B’s perspective): 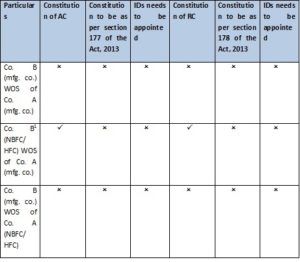 Though MCA is trying to understand the practical difficulties faced by the companies they missed amending Rule 3 (11) of the MBP Rules, 2014 which require the companies to keep the recording of proceedings of the meeting conducted through video conferencing. The said rule seems meaningless as the draft minutes are circulated to the board members and their comments are invited. Therefore, the very purpose of recording the proceedings is defeated. The Ministry needs to relook at the provisions of the said rule as the same is discouraging the companies to provide video conferencing facility to the directors.