“The auditor’s report shall also state —

Section 143(3)(i) of the Companies act, 2013 shall not be applicable to private companies which is start-up Company or OPC or which has turnover less than rupees fifty crores as per latest audited financial statement or has aggregate borrowings from banks or financial institutions or body corporate at any point of time during the financial year less than rupees twenty five crores.

While the second exemption notification was issued on June 13, 2017, various auditors of such private companies faced an issue with respect to applicability of reporting the adequacy of internal financial control (“IFC”) systems for the FY ending March 31, 2017. In this regard, MCA came up with the circular clarifying the position as under –

“Stakeholders have drawn attention of this Ministry to the serial no. 5 of notification No. G.S.R. 583(E) dated 13th June, 2017 which states that requirements of reporting under section 143(3)(i) of the Companies Act 2013 shall not apply to certain private companies as mentioned therein and have sought clarification w.r.t. the financial year(s) in respect of which the said exemption shall be applicable. The issue has been -examined in the Ministry and it is hereby clarified that the exemption shall be applicable for those audit reports in respect of financial statements pertaining to financial year, occurring on or after 1st April, 2016, which are made on or after the date of the said notification.”

Consequently, the auditors of such companies are not required to specify about IFC of the company in its audit report in respect of financial statements pertaining to FY commencing on or after April 01, 2016 provided such financial statement is prepared after June 13, 2017. Therefore, the scenario which emerges as follows: 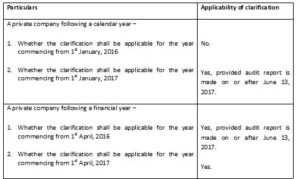