In this era, where the country is going through immense economic growth, more and more investors are coming up with the intention to invest in the equity of the companies. Such investments lead to acquisition of interest and rights by the investors in the company. Intention of every investor varies from each other. Where one invests with the intention to earn short term profit by trading in the securities of the company, the other may invest with an intention of long term investment and enjoying the dividend ownership and / or controlling rights over the company. While each and every investor does not participate into the everyday affairs of the business, however, with the level of transparency being visualised, each investor, especially, the long term investors surely have a crucial role to play in the company.

Admittedly, both the erstwhile CA and CA, 2013 contain dedicated chapters to provide law for protecting the interest of the minority shareholders in the company. Despite all the provisions, the majority shareholders, by virtue of holding dominant stake in the company, enjoys high privilege as to rights and control. 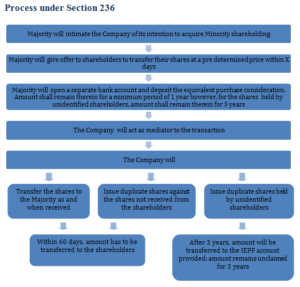 Pursuant to section 124 & 125, shares on which the dividend remains unclaimed for a period of seven years or more shall be transferred to the Investment Education and Protection Fund Account (“IEPF account”). Now the question arises that how will the majority shareholder acquire the shares which are already transferred to the IEPF Account?

The answer to the question is secured in the logic hereafter. This should be understood that the IEPF only acts as a custodian to the shares transferred to it by the company under section 124 & 125 of the Act, 2013 and as such, it is not bestowed with the authority to sell/transfer the same. However, for the purpose of acquisition under section 236, consent of shareholders is not required. Therefore, in such circumstance, the shares transferred to IEPF shall stand transferred by issuance of duplicate share certificate by the Company to the Majority and transferring the purchase consideration against the same to the IEPF account. Shareholder has the right to claim the amount paid as purchase consideration from IEPF at any point of time.

Pursuant to section 236 of the Act, 2013, purchase consideration shall remain deposited in the separate bank account for a period of 1 year. However, purchase consideration payable to the unidentified shareholder shall remain deposited for a period of 3 years therein and thereafter, the same shall be transferred to IEPF account.

Amount which remained deposited in the said bank account for 3 year, will be vain for the company since, the company won’t be able to earn return over the same. Therefore, looking into the intent of law which is to secure the payment of purchase consideration payable to the minority shareholder on being identified, the same can be secured by the company by way of bank guarantee or taking an over draft facility on the account.