With the advancement in technology, there has been a dramatic change in the lifestyle and perception of people, from sharing their mood on facebook or becoming an overnight celebrity by trolling on Instagram or twitter to crowd funding from across globe for a social cause, to starting a business idea online. Technology has opened a virtual world which is now gaining traction for doing business surpassing geographical limitations. With the emergence of new and improved technologies, lives have become much more easier (if we could say so) than what it was just a decade back.

In the era where everybody is connected to the world wide web, there is much happening on exploring financial intermediation through technology as well. Lending and borrowing is an age old relationship. Right from the days of usurious money lending to intermediation by banks and financial institutions. Technology is now ushering an era of removing the limitations of physical presence for lending decisions and is buzzing to create a new virtual space for undertaking lending decisions. An outcome of this is emergence of a business model called, peer to peer lending, more popularly known as P2P lending[1].

P2P is a process where the lenders and the borrowers come together on a virtual platform in a bid to undertake financial business. The role of the platform is limited to acting as a facilitating agent, in some more complex models P2P platform is actively engaged in lending apart from acting as facilitation centre.

The focus of the article is to understand the current models of P2P lending across the globe.

Peer to Peer Lending has become an important part of the financial services sector in many countries worldwide. Companies like Lending Club, in the United States of America and Zopa in the United Kingdom[2], which started their operation just few years back have already became a threat to the retail banks. These companies are now worth billions. They advance loans of nearly equal values as any retail banks in the respective countries.

The key factor that has led to success of these companies is, that instead of advancing loans to borrowers out of their own fund they tend to bring together the members of common public of a country who have idle funds and the ones who are in need of funds. These companies acts as intermediaries between the lender and borrowers. By acting as intermediary they avoid the traditional risk which a bank has to face as they act as borrower to every lender and lender to every borrower.

There are numerous success stories of P2P lending companies (company) worldwide[3], but this must be noted that business of rolling 3rd party money isn’t the easiest one to clone and achieve success as it depends on multiple factors including regulatory framework, public’s mind-set toward credit and taking up risk, structure and diversity of the economy, etc.

There are two models that are prevalent globally,

The modus operandi of the two models is illustrated below. 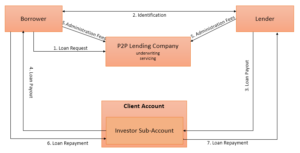 This is the simplest form of P2P model, where the lenders directly interact with the borrowers and they themselves fix their counter parties.

The process of client-segregated accounts model is briefed below:

This form of P2P model is very transparent as both the parties have complete knowledge of where their hard earned money is going or to whom one needs to pay, to pay off ones debts. Here the lenders do not face any risk of losing their money in the event of bankruptcy of the P2P company as there is a direct agreement between the lender and the borrower, nor the company faces any risk of claims from the lenders in case of default of the borrowers, as the lenders are the sole decision makers based on their own discretion, whether to advance a loan to a specific borrower or not. 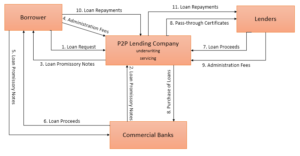 This is a much complex form of P2P business, which involves a commercial bank apart from the lender or the borrower.

The process of the notary model is briefed below:

This form of P2P model is advantageous to the borrowers as they do not need to wait for a lender to identify him/her and advance them loans, instead the company helps the borrowers by making the loans originate from the bank as soon as possible and later converting the loan into a P2P loan. This is the model used by the industry leaders like Lending Club and Zopa.

P2P lending is growing fast worldwide and if it keeps the same pace of growth it is set to overtake the traditional system of banking in the next decade.

In the United Kingdom, the value of total loans disbursed by the P2PL companies raised from £ 871 million in 2012 to £ 2.4 billion in 2013, and since then the amount kept doubling every 6 month – 1 Year. Though this is a very small amount as compared to the €1.2 trillion retail deposits of the country, the rate of their growth is surely seen as a threat by the commercial banks of the country.

Though the concept of P2P lending originated in the UK and was developed in the USA, China the 2nd largest economy of the world is not lacking behind in any aspect in exploiting the advantages of P2P lending. Ppdai was the first P2P lending to go live in China in June 2007 and since then the no of P2P companies has been on a constant rise. Due to the conservative policies of China no one knows of the total revenues of these platforms, but they surely are making some decent profits to continue to remain in business and even attract new entrants, who are not only from within China but from overseas as well. Alibaba Group Holdings Ltd’s[6] finance arm is all set to create a P2P market place worth US$ 163 billion (¥ 1 trillion) in China by the year 2016, it launched its P2P platform “Zhao Cai Bao” in April, 2015 and is already a market place worth ¥ 14 billion. The CEO of Zhao Cai Bao stated – “Think of us as an exchange for loans”. It can be clearly understood from these words that Zhao Cai Bao is openly challenging the retails banks of China in their lending business.

While the entire world is seeing a boom in P2P funding, in India the P2P lending is still not prevalent and has no recognition at all. Even more, there are no regulation governing P2P lending. While the common laws of the country are largely based on the UK common laws and are largely facilitating and broad based in nature, the regulatory complexity and unclarity on P2P model has acted as a major deterrent in venturing into the region. There is ambiguity on whether P2P would be seen as crowd funding model or will be seen as a collective investment scheme. The Securities Exchange Board of India (SEBI)[7] has a draft on crowd funding but there is still a long way to go before the same is finalised and implemented. Lack of understanding on the regulatory side is one of the primary causes that P2P has not taken off in India.  see our article on legal aspects of p2p in India – http://www.moneylife.in/article/is-peer-to-peer-lending-too-futuristic-in-india/43545.html.

The slow or late emergence of P2P lending in India is mainly due to the mind-set of the people, who do not want to take risk of advancing loans in order to earn higher on their idle funds and still prefer the traditions system of approaching the banks for deposits and investments. India needs to catch fast with the rest of the world in this regard to enjoy the early benefits from this new system.