Asset securitizations in China were halted since 2009 after the credit crisis in US markets started developing. However in May 2012, the activity gained round after the PBoC, CBRC and Ministry of Finance jointly issued a Notice on Matters Concerning Further Expansion of Credit Assets Securitization Pilot Program and planned for the launch of its third pilot program with RMB 50bn limit in the interbank market. A year later, in March 2013, as a part of its deregulation objectives, the CSRC upgraded asset securitization activity to a routine business process by issuing Securities Company Asset Securitization Regulations. The following table outlines the historical developments in the Chinese Securitization market:

Further to increasing market activity, the State Council executive meeting on August 28, 2013 decided to expand the trial program for securitization of credit assets to make it a more commonplace activity. The Council has allowed the trading of high-quality asset-backed securities on stock exchanges for the first time. The following graph shows that NBFIs in China were acting as virtual conduits for the banks. The move by the State Council to allow securitization activity only legitimizes what is currently happening informally: 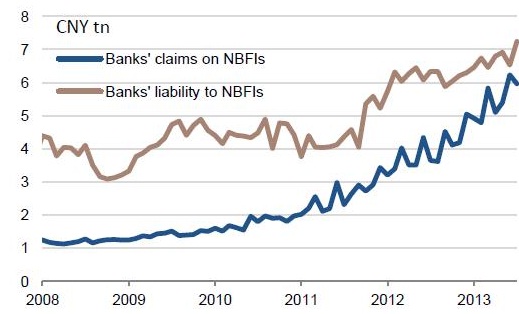 The State Council has called for strict supervision of securitizing credit assets and that the functions and responsibilities of trust companies and accounting firms should further be made clear in this regard. The Chairman of the China Banking Regulatory Commission Shang Fulin has also said that detailed measures should be put in place to enable the expanded credit asset securitization trial to benefit more small and medium enterprises which are cash-strapped. According to the statistics from the CBRC, by the end of July 2013, the outstanding balance of SME loans nationwide amounted to RMB 16.5 trillion. The reforms should also help participating banks expand their funding options. It should also help the government meet funding requirements for infrastructure projects. In addition to this, the CBRC has sent out a circular to insurers to make them actively participate in the pilot. Currently, credit assets that may undergo securitization include credit loans, guarantee loans, small and micro-sized business loans and auto loans.

Some analysts feel that although the reforms may boost liquidity through stock exchange trading and improve regulatory oversight over the banking sector, it may not spurge activity in this sector, given the illiquid nature of these products and that large scale transfer of NPLs from banks may not be easy because of pricing issues. If volume of issuances increases in the future and the cost of issuances falls, then products will become more liquid.

** The information has been prepared from information in CSRC, CBRC website and Nomura Research Institute.

To read more on the China Regulations please click here